It was just over three months ago that Alexander Hayne burst onto the scene while winning Pro Tour Avacyn Restored. The Canadian is clearly the new guy on the block at the Players Championship, coming in with far less experience than virtually every player here.

But one thing he does have on his resume is a 1-0 lifetime record against Jon Finkel, his round 9 opponent here this week. Hayne had narrowly edged Finkel at PT Avacyn Restored in the quarterfinals 3-2, and he used that as a springboard to winning the whole thing.

However, neither player was having much success so far today. Both players had come to Magic 2013 draft tied for second at 4-2, though Hayne had certainly slipped after starting the tournament 4-0.

But since then, things had only gotten worse. Playing White-Blue decks, both Hayne and Finkel were 0-2 so far today, slipping back to the middle of the pack and leaving little room for error. Whoever won this round would likely still need to go on a tear to make Top 4. 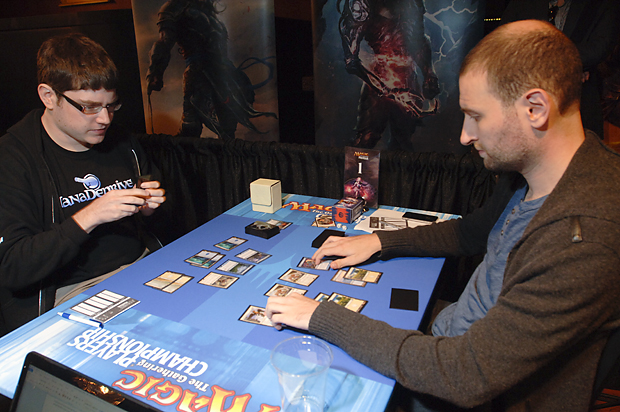 Both Jon Finkel and Alexander Hayne were looking to salvage their Magic 2013 Booster Draft records in the tournament's final Limited round.

"Whoever wins this should go 3-0 in Modern," Hayne offered as the players shuffled up.

"That's a good deal, I like that. Let's do that," Finkel snap accepted. If only it were that easy...

Finkel led with a pair of War Falcons, while Hayne merely played a Kraken Hatchling on his first two turns.

However, the Hatchling looked far more impressive when Finkel played a Scroll Thief, leaving his War Falcons turned off and closing most of the doors to Finkel's attack otherwise. He continued to build his defenses with a Fog Bank followed by Divination.

Meanwhile, Finkel had added a Griffin Protector, but still had nary a soldier or knight to be seen. 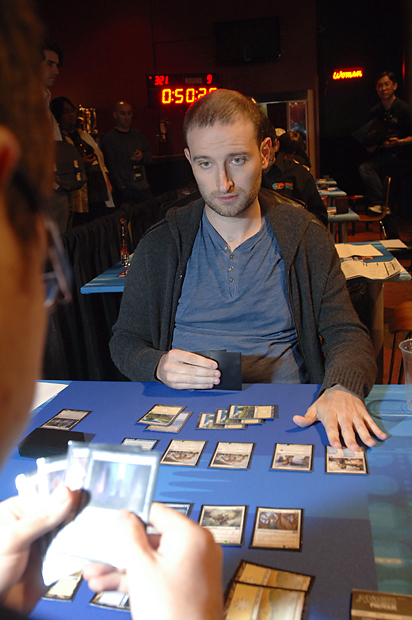 Finkel sits back with some very peaceful falcons.

"Those are some peaceful Falcons," Hayne said, playing a less-than-peaceful Serra Angel, which nonetheless could have some difficulty getting past a pair of 2/1s. He added a Healer of the Pride while Finkel passed the turn.

Crusader of Odric, however, gave the American a significant threat that could easily occupy Fog Bank's attention, but Finkel passed with no attacks as the board became more and more gummed up.

Pacifism from Finkel changed all of that. Shutting down Serra Angel gave him cause to crash in with the entire team, including the previously peaceful War Falcons. Finkel got in for 6 damage after blocks to put Hayne to 16 life.

But his life total shot right back up as he cast Attended Knight and Scroll Thief, undoing most of the damage done the previous turn. And with Finkel's creatures all occupied attacking, Hayne was able to sneak in for 3 damage before passing back.

But the dam had certainly burst on what was previously a stalled board. Finkel started attacking with the better part of his team for the next several turns while Hayne would spend his turns reversing the damage with Healer of the Pride and occasionally chipping in for a few points here and there.

This continued back and forth until Faerie Invaders jumped in front of one of Finkel's War Falcons, earning a Show of Valor to down the flashy 3/3.

Hayne then played Spelltwine on Show of Valor, pumping his Scroll Thief, and Divination. He was clearly after some cards, hoping to break the board clog any way he could.

Unfortunately for Hayne, he had been forced to use a Negate on the attack to prevent Glorious Charge from wrecking his team, leaving him utterly vulnerable to the Sleep that dropped his once healthy life total all the way to 6.

The next turn Finkel cast Captain's Call, pumping his Griffin Protector to astronomical heights ... or at least enough to represent lethal in a game Hayne had seemed to have well in hand just a few turns prior.

As grindy and complicated as game 1 was, game 2 was a brutally fast affair.

Once again Finkel led with two War Falcons, but this time Attended Knight showed up right on time turn three to turn the pair of birds from flying Razorgrass Screens into flying Elite Vanguards. Were it not for Fog Bank, Hayne might have been down and out before he could even cast Healer of the Pride, let alone gain life off of it.

Hayne, meanwhile, had cast a bevy of creatures himself, but only the Fog Bank had flying. And when Finkel found a Griffin Protector, it rendered all of the ground-pounders virtually irrelevant.

Hayne did manage to live long enough to cast Healer of the Pride, but with no creatures to follow it up, it was rendered rather unimposing.

And when Divine Verdict killed Fog Bank, the skies were completely clear for Finkel's air brigade. Two unobstructed attacks later and Finkel had escaped M13 draft with a single win while Hayne continued to fall from his blistering start.

1 Mark of the Vampire 1 Crippling Blight