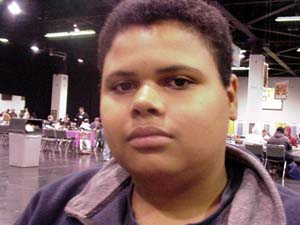 players were clinging to Day Two life and facing elimination. Dave Humpherys needs little introduction. He is part of the founding trinity of the YMG team along with Darwin Kastle and Rob Dougherty. Dave was playing the YMG Oath deck.

His opponent this round was introduced as 'Grand Prix Trial winner Antonio Ennis', which should give you an idea of the obscurity Antonio toils in. He is not be trifled with though. He could have easily won the PTQ on Thursday, instead electing to "sell" the slot for the prize money. And did the same last week at another PTQ. He also-as his introduction stated-won three byes in the earliest Trial yesterday. He was playing more or less the same Red Deck Wins that he had been proving aptly named all weekend.

Despite his obscurity, Antonio displays the quirkiness of many of the Pro Tour's better-known personalities. Dave was laughing as they shuffled, "He has already told me this is his best match-up."

When asked what deck Dave was playing Antonio admitted, "Dunno-I just hope it is my best match-up."

Dave was on the play but Antonio made the first play with a Seal of Fire. Dave cast Vampiric Tutor for Oath of Druids EOT and cast it on his next turn. Antonio played a Port and began assaulting Dave's mana every turn. He reinforced that assault with another Port, Wasteland, and Pillage over the next few turns.

If that wasn't enough he played a Tangle Wire and another Wasteland. A couple of burn spells later Dave found himself at fourteen with no blue mana to counter Blistering Firecats on back to back turns. 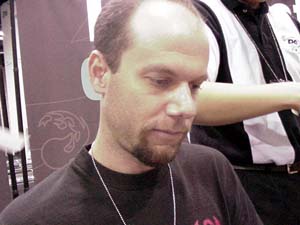 Antonio had the first turn play of Cursed Scroll that looked good in the face of Dave's second turn Chill. What also looked good for Antonio was a repeat assault on Dave's mana with two Ports, Wasteland, and Tangle Wire. While Dave was contending with the Wire he was able to eke out an Oath of Druids.