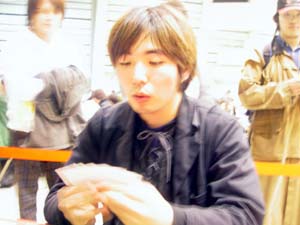 Okamoto mulliganed down to six. On turn two he played , and he then used Living Wish to get Argothian Enchantress, but was none too eager to cast it into Nakamura’s untapped islands. On end step, Nakamura cast Intuition to get three Accumulated Knowledge, and sat back on his mana. Okamoto’s Enchantress was Counterspelled, and Words of Wind was Force Spiked. On Okamoto’s next turn, Nakamura responded to Enchantress’ Presence with Accumulated Knowledge, but didn’t draw a counterspell. Words of Wind followed, and this time Nakamura could stop it with Mana Leak. He untapped and summoned Psychatog, putting a bit of pressure on Okamoto. Trade es provided a good resource and drew Okamoto another card, and Nakamura responded to Seal of Removal with Accumulated Knowledge for four. The Seal resolved, giving Okamoto some Psychatog protection. resolved as well, and Living Wish searched out Raven Familiar, which came right into play. The ‘Tog was chump blocked by the Familiar, which bounced back to Okamoto’s hand thanks to the Seal. Facing down a lot of trouble, Nakamura cast Cunning Wish to get Mana Short, leaving one mana open. Trade es allowed Okamoto to cycle some lands, but Mana Short slowed down his production. Nakamura attacked with his Psychatog, and played a second. Despite all the cards he drew, Nakamura was oddly in no position to put up much resistance. Okamoto summoned an Enchantress and started playing enchantments, as Nakamura made a “Yeah yeah, okay, hurry up” motion with his hand. After Okamoto unloaded a ton of enchantments and drew plenty of cards, he ended his turn. Nakamura played Fact or Fiction on end step, and Okamoto presented piles of Force Spike, Cunning Wish, Counterspell and Circular Logic, Mana Leak- Nakamura took the three card pile. This gave him some answers, but he was ill-equipped to deal with all the ammo Okamoto had accumulated. He unloaded all of it to draw plenty of cards and produce lots of mana, and Ambassador Laquatus convinced Nakamura to scoop.