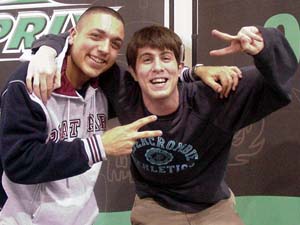 "If you were playing in a fourteen round tournament would you draw at 6-1? It's better if we just play-I think we're both in no matter what happens."

"I hope so… If I get knocked out here…I need to make Top 32 to stay on the gravy train."

"Gerard…halfway through the match I am not going to draw if you are losing-I just want to tell you that now."

Gerard sighed and wavered. He laid his hand down on the table and showed off a Spikeshot and a Grab the Reins. "Where is your mountain?" asked Mark.

Gerard shrugged and challenged Mark, "Next five cards…let's see your next five." The two played out some fantasy version of how the match would have concluded after agreeing to the draw.

Mark, who was extremely leery about his deck, was glad to ensure a seat at a Day Two draft. Gerard did not seem as happy. Mark Zajdner is a member of the new YMG squad that has coalesced recently. One member of that team gained password access to the CMU/TOGIT member's accounts on the beta test of Magic Online. The whole team is rumored to have access to all of the CMU decklists for Pro Tour Kobe.

"Gary Wise is going to be really mad at me when he reads that I took the draw." The CMU squad was not supposed to make any friendly overtures to any members of the offending team-especially in regards to intentional draws. While the teams are not on friendly terms that does not apply across the board on an individual basis. "Mark is my friend and he wants to stay on the Pro Tour…"