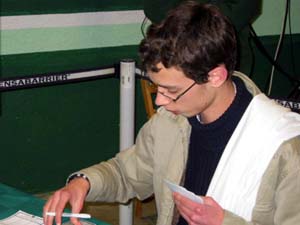 is no question these two warriors have their passport almost stamped to play tomorrow. It's merely a formality now. What's at stake now is who will end the day at the top of the standings and who will end it in the middle of the pack.

The Spanish came out in a hurry with a first turn Auriok Glaivemaster followed by Loxodon Warhammer and Iron Myr but the Portuguese was in more of a controlling mood. He played Spikeshot Goblin, Viridan Longbow and Yotian Soldier.

Spikey set to work on Jose's creatures even before Martins found Vulshok Morningstar. Eventually Gomez found a creature large enough to stay on the table: Tel-Jilad Archers. But Antonio had the answer: he used Spikey and Entwined Barbe Lighting to finish it off.

The game seemed destined to be ruled by Spikey but Gomez found an answer for it: Unhinge. The Portuguese lost his Goblin but had Turn to Dust to stop the Warhammer from taking over the game.

When the dust settled Jose Luis Gomez took a second to breath and played another bomb: Pristine Angel. Martins sent both creatures in and unleashed Stand Together to save his blocked Tel-Jilad Wolf. For a change, Jose Luis Gomez had the perfect answer: Awe Strike.

The Angel quickly gained a friend in Death-Mask Duplicant. Together they convinced Antonio Martins that he should pick up his cards and take a good look at his sideboard.

Again Martins had the magical Spikeshot Goblin early on. Gomez snickered. This time his two creatures were large enough to withstand the shots. He had Tel-Jilad Wolf and Fangren Hunter while the Portuguse had Hematite Golem and Spikey defending a lone mountain.

Shatter took out the Golem when Martins found a second Mountain and Shrapnel Blast ate up Spikey when it helped Barbed Lighting kill the Hunter. Martins was out of creatures but he still had an answer in hand: Icy Manipulator.

The Spanish quickly nullified it with Auriok Transfixer. On and on the Transfixer tapped the Icy and the Tel-JIlad Wolf pounced on. Finally Antonio Martins found a creature: Oxida Golem. Unfazed Gomez answered with style: Glissa Sunseeker.

The Wolf attacked again and this time Martins solved the problem with Tangle Spider. The Golem attacked and Glissa stepped in the way. Antonio thought he was being tricky when he played Predator's Strike but Gomez was even trickier: Awe Strike.

With the legend still roaming free Antonio knew his artifacts where in trouble. Still he had to press on because his precarious life total - four - didn't leave him much room to maneuver.

The creatures started piling up on both sides of the table, with the Spanish strangely neglecting to use Glissa's ability before using his mana to cast creatures. He finally decided to use it... on the turn Antonio played his Pyrite Spellbomb. The legend departed. When the dust settled Antonio had no artifacts left but his Forge Armor had turned one of his Tangle Spider into a 6/7.

The pumped Spider started taking huge chunks of Gomez's life total, to a point where the Spanish was forced to chump. To add to his woes Antonio played his own Glissa Sunseeker. Unlike Jose Luis Gomez he was more than willing to use its ability.

A turn later Antonio had salvaged a win from the maws of certain doom.

Martins took a trip to Paris and came back a happier man. Gomez again opened with Auriok Glaivemaster but didn't have anything to follow it up. Antonio seemed more keen in the equipment plan. He played Viridian Longbow and Vulshok Morningstar. By turn six Glaivemaster was still the lone creature in play.

The Portuguese tried to change that with Slith Predator but a Pyrite Spellbomb took it out when he tried to equip it. Gomez played Tel-Jilad Wolf and Martins dropped Oxida Golem equipping it to the fullest. The Golem got to shoot the Glaivemaster before an Unhinge took it away along with the Morningstar. 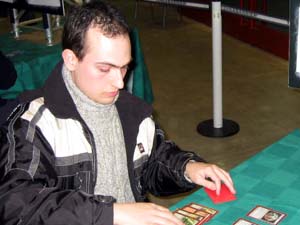 Now the Wolf was the lone creature. The Portuguese tried to play an artifact creature but Gomez blew it up with Oxidize and gave his Wolf a Loxodon Warhammer. As if that wasn't a big enough problem he added Fangren Hunter to the mix.

Martins' poor Yotian Soldier was no match for that tag team, so he dropped a surprise Tangle Spider to block. That didn't kill the Hunter but it didn't really matter. The Portuguese was at two and the Spanish dropped the elbow: he played Glissa Sunseeker.

There was nothing Antonio Martins could do apart from extending his hand.