Neeman won the die roll and elected to play first, but it was West who started off casting with a first turn Duress taking Burning Wish (Burning Wish, Starstorm, Exalted Angel, Lay Waste, Secluded Steppe and Forgotten Cave). A Duress on the next turn nets him the freshly drawn Lightning Rift. West casts Pillage on the Secluded Steppe and Neeman cycles away Akroma’s Blessing in response. 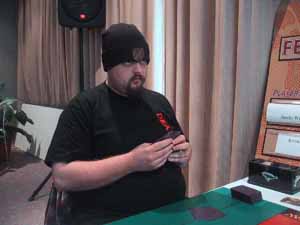 The Pillage does the damage though and despite another draw phase and a main phase cycle Neeman cannot find another land. West burns off an Overmaster and ends the turn, with Neeman finding a Forgotten Cave and casting a Lightning Rift. West casts a Befoul on Neeman’s last source of white mana and passes the turn across.

Neeman draws a mountain and plays out a morph but it doesn’t last long, with West casting an Innocent Blood knocking it out. He then casts a second Innocent Blood and powers down a 10/10 Magnivore smashing Neeman in the face. There’s little he can do and he scoops up his cards and moves to game two. 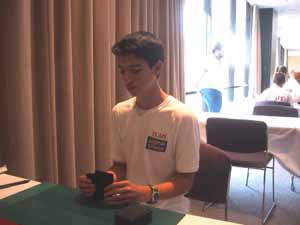 West burns off an Overmaster on turn one and passes the turn back to Neeman who plays out a second turn Lightning Rift. West burns out another Overmaster and passes again, with Neeman cycling Blessing in his main phase hoping to find a third land. When he doesn’t find one the turn passes back across to West, with a Pillage bringing a world of hurt to Neeman who sees his other land Lay Wasted in the next turn.

Rancid Earth takes care of the Land that Neeman just drew and West burns off an Edict to help build up the upcoming Magnivore. Neeman draws another land but its met with a Stone Rain and when West cast Magnivore that’s game, set and match 6-0 6-0.