A long, long time ago - way before Morphling, Masticore, morphing, buyback and stuff like that - Raffaele put Italy on the Magic map. He did in style, with a Worlds Top 4. Since then, he has been a constant presence in European events, altough without another major result. Today he is still well in the hunt for the Top 8. 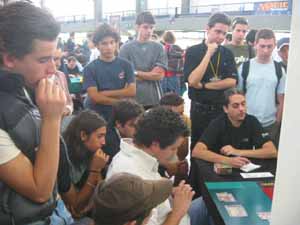 Things didn't start well. LoMoro accidently drew eight cards and was forced to mulligan to six, receiving a warning in the process. He was still shaking his head at the mistake when he played his first land.

The quiet German just smiled it off and went about setting up his mana. Lo Moro finally moved on his third turn playing Goblin Warchief. Heidemann reached Wing Shards mana and the Italian lapsed into thought. He settled for sending the Warchief in, and it got Sharded away.

Sharpshooter came into play, followed by Clickslither while Heidemann played and unmorphed Exalted Angel. The race was on. Siege-Gang Commander came in to tip the scales, getting a frown from Martin.

The Clickslither ate up the whole gang, letting the Sharpshooter take out the Angel and dealing a massive eleven damage to the German. Without his star creature Heidemann had no reason to hold back Akroma's Vengeance. He played it, wiping the table clean.

Raffaele played another Commander and Martin shoent it away. Lo Moro drew his cards and laughed: Rorix. The German smiled and fell to a single life point. Martin played Eternal Dragon to block.

Raffaele Lo Moro peaked at his top card and smiled: Shock. Martin's eyes widened and he scooped his cards.

Martin: "Oh, come on!"
Raffaele: "Sorry. Two topdecks in a row."
Martin: "Well, I topdecked Starstorm so it's alright. BUt it was only one card."

Heidemann wasn't too happy about his starting seven, but he kept it. Lo Moro came out with second turn Piledriver and watched his opponent play a turn three Temple. He tried to pounce on those mana problems with turn three Warchief but Martin was ready with Incinerator.

Out came Silver Knight and suddenly Lo Moro was in trouble. He played Sulfuric Vortex to keep the damage going but Heidemann wasn't about to be denied. He attacked with the Knight and played Exalted Angel.

With the Vortex clock ticking the nervous Italian considered his options. In the end he simply played Warchief and passed the turn. Heidemann used another Incinerator to ice another Warchief and sent his crew in.

At eight facing Angel, Knight and his own Vortex the next turn, Raffaele Lo Moro stared at his hand for a few moments and scooped. There was no way he could win this game in the remaining turn.

As they shuffled the crowd roared as Stefano Fiore won yet another round on the other Feature Match. Now 11-0, the Italian was the first to collect the ticket for the Top 8. Again the German grimaced when he saw his hand but kept it.

First turn Shock took Sledder away, but Lo Moro still sent Piledriver and Warchief in on turn three. The German shook his hand as the crowd leaned in. A cycled Incinerator sent the Warchief away and the Italian replaced it with a second Goblin Piledriver and Goblin Sledder

Sadly, he didn't say the same about his draw. He cycled another Incinerator but Sledder saved one Piledriver. A THIRD Incinerator finished that job. The lonely Piledriver attacked and Raffaele played Goblin Sledder visibly shaken by his opponent's early game (three Incinerators and one Shock).

He took a few minutes to collect himself and plan his next move. In the end he played Goblin Warchief. That didn't work out for him. Martin Heidemann had all the answers: Wing Shards. The Sledder and Piledriver went away.

At eleven life points the German had blunted most of his opponent early game. He Cycled away three caards before giving Lo Moro another chance do something. On, and on, the sad Italian considered his options. His best plan turned out to be playing Gobin Goon. Heidemann had the FOURTH Incinerator to wipe away the Warchief and keep the Goon back another turn.

On his turn he played Exalted Angel locking the Goon away. Lo Moro looked out of the maatch and even drawing Rorix didn't seem to help. The German played a second Angel and Silver Knight, still cycling like a madman.

Finally he found the mana and Akroma. The Italian crowd started chanting for Jokulhaups or Anarchy. Since they are not Onslaught Block Constructed legal cards, Raffaele Lo Moro scooped a turn later.