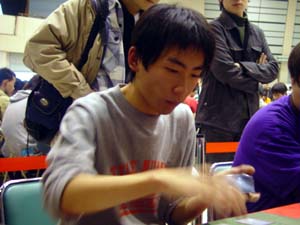 far as feature matches go, it doesn't get much better than this. Oiso and Mori have both captured the Rookie of the Year title, and are playing the exact same deck- all 75 cards between the maindeck and sideboard are identical. They're running blue-white Mind's Desire, an idea that Mori got on Magic Online from Antoine Ruel. He tweaked it a bit and gave the decklist to Oiso. Now, they're in round five against each other, and drawing quite an interested crowd. Not only is it a mirror match, but it features two of Japan's best players. Oiso is the only Japanese player to have two Pro Tour Top 8's, and is the reigning Rookie of the Year. Mori is a former Rookie of the Year who barely missed a Worlds Top 8 back in Toronto, coming in ninth.

Oiso mulliganed down to six, and had a second turn Sunscape Familiar, while Mori played Sapphire Medallion. They both played Brainstorms to set up their decks a bit, and Oiso played his own Medallion. Mori played a second Medallion followed by Cloud of Faeries, and got some action going with Fact or Fiction. The piles presented were Mind's Desire, Chrome Mox, plains and Cunning Wish, Sunscape Familiar- Mori took the three card pile. Oiso played his own Cunning Wish on upkeep to get Mystical Tutor, and then cast it to get Mind's Desire. Turnabout untapped his lands and Snap brought back the Cloud, then he played Mind's Desire, only getting Sleight of Hand and Brainstorm along with lands. With Oiso's attempt at going off fizzling out, Mori set up his own with Accumulated Knowledge, Merchant Scroll to get Cunning Wish, two Cloud of Faeries, Brainstorm and Chrome Mox before playing Mind's Desire. The top six cards were disappointing, revealing the other two Sapphire Medallions and four lands. It looked like Mori was about to run out of steam, but he played the two Medallions and tapped two blue mana to play a second Desire. When a third Mind's Desire was revealed along with plenty of other action cards, Oiso conceded.

Oiso played a second turn Medallion, and Mori missed his second land drop, discarding Sunscape Familiar. This gave Oiso an opportunity to start setting up the combo, and when Mori couldn't find a second land in the next two draws, he knew he was beat and conceded right away. 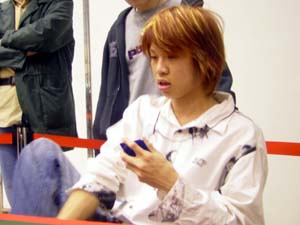 Mori's luck wasn't improving much, as he mulliganed down to five. He still managed a pair of Sapphire Medallions, but was stuck at two lands. Oiso had a Medallion and cast Fact or Fiction on turn three, taking the pile of three lands and Sleight of Hand instead of the one card pile made up of Cunning Wish. With only two lands out Mori cast Intuition and had a hard decision to make, since he didn't have many resources to work with. After some thought, he decided to get Cloud of Faeries, and then cast Brainstorm to find a third land. Oiso untapped and played Brainstorm, Cloud of Faeries, Snap, Cloud of Faeries, Cunning Wish for Snap, cast it to bring back the Cloud, and so on until Mind's Desire was cast for ten. Another Mind's Desire was the second card revealed, and Mori conceded.