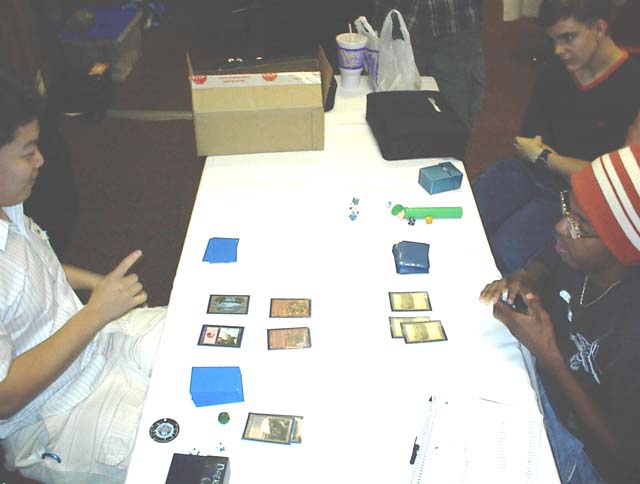 Hailing from Southern Indiana, Gary Ritchie maybe one of the best players you have never heard of. Well, you may have never heard of him for a few reasons. The student rarely travels to events outside of the Indiana and Kentucky area. He is a relatively young player in the world of competitive magic, but that has not held him back so far. To top off a few solid local Prerelease and Grand Prix Trial performances, he has one QT top eight in his career. He is playing the three color slide deck that did well at the United States Nationals Adam Yang is a Louisville native, and a freshman at Georgia Tech University where he studies biology. The winner of the Scourge Prerelease, this limited specialist is looking to add some constructed credentials to his resume before he makes the move to Georgia. Yang choose to run the new Goblin Bidding deck that made three players a little bit of money at Grand Prix Bangkok.

Gary won the roll and chooses to play first.

Before the match started, Gary was practically begging for the Intentional Draw. Adam knew how bad of a match up the Bidding deck is for slide and refused his requests. Things looked horrible for Gary when Adam controlled a Goblin Piledriver and a Prospector by turn three, but breathed an audible sigh of relief when the Goblin Warchief refused to show up. Yang had Sparksmith to follow up his attack phase, but Gary was at the ready with Wrath of God to give him a little bit of breathing room. That wacky Goblin Sharpshooter came into play for Adam, and Ritchie called back with a Teroh’s Faithful. Adam’s next turn was very ridiculous. He played Sparksmith, Goblin Sledder and Skirk Prospector. Without a Wrath of God, Gary was forced to keep his Faithful back on defense and passed the turn.

Sparksmith cleared the way for the rest of Adam’s team, and mistake was made here by Yang. Instead of activating the Sharpshooter to hit Gary for one, he held back and attacked with the Prospector and the Sledder. Gary followed up his turn with a face down creature, and was getting frustrated by his decks inability to cough up some more land. Sparksmith cleared out the face down Exalted Angel (no surprises there.) and again missed a chance to do a point with the Sharpshooter. Another attack from Adam put a serious hurt on Ritchie’s life total, and a cycled Decree of Justice tried to make some blockers. To the surprise of everyone watching, Yang actually did something right, shooting down all the blockers with his Sharpshooter. Gary had a slide, and things looked a bit better as he flashed me a Slice and Dice that could wreck havoc on Adam‘s non growing goblin army. When Adam declared his attack step, he swung with his team, only to fall short of a lot of beats when Gary cycled a Slice and dice. In response Yang sacrificed the two non shooter goblins, and dealt three points of Sharpshooter damage. The pumped Sparksmith came roaring across for two. Fireboat from the graveyard took Ritchie to five and another Goblin Sledder later, Adam passed the turn.

Gray played a Lightning Rift, and just as things were looking up for the Indiana player, Patriarch’s Bidding came down from Adam’s hand. All of the previously dead Goblins came back to and all Gary was able to get was the long dead Exalted Angel. Seemed fair right? Gary brought back a cycled Eternal Dragon, sent in with his Angel and passed the turn. Adam drew and attacked with his team. After the Lightning Rift and Astral Slide abilities resolved, Gary sat at a thin two life while Adam had an active Sharpshooter and two goblins that could be sacrificed. Apparently Yang knew what was going on when he did not shoot Gary the previous times.

Gary was very unhappy with his opening hand, he cashed in the one land hand for one that had a few lands. Adam choose to keep. The first creature was of course played by the Bidding player, and Gary just kept playing out plains. A second goblin joined the team, and by turn three Ritchie was down to fifteen life. Wrath of God looked to stop the pressure, but Adam was ready, and armed with the proper tools to make another mistake.

And what a slobber knocker of a mistake it was.

Let’s take a look at Adam’s board position. He had four mountains in play. In his hand was Goblin Matron, two Goblin Piledrivers and a Goblin Warchief. What play did he make?

If you answered B, then congratulations. You and Adam Yang share the same brain waves. Instead of making the obvious play of Warchief and Piledriver, Adam held back his threats, and allowed Gary the time to find red mana to cast the lightning rifts that were clogging up his hand. Gary found it, played a rift, and passed.

Finally, Adam cast the war chief and the Piledriver and tried to attack for a million (actually it was sixteen, but a million sure seemed like a good number to attack for.) A cycled Steppe killed off one of the Piledrivers, and Gary had one more turn to find the goods before he was overwhelmed.

It was not to be, as he drew, sighed, and passed the turn. Adam played the Matron he had in hand, and searched out another Piledriver. This guy joined the force, and after combat damage resolved, Gary extended the hand.

Another feature match ends, and with it the hopes of at least the gallery of people watching. Throngs of onlookers walked away, shaking their head as they tried to figure out how Adam Yang has piloted his deck to a perfect record so far in the swiss.

Adam Yang (2-0) improves his record to 5-0. Gary needs to win out and get help from his tiebreakers to make the top eight as he falls to 4-1.