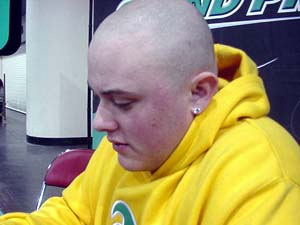 four is one of the most anticipated rounds every Grand Prix. It is the round where all of the name players have to wade in to the sea of players that have been going at it all morning and try and win three rounds to make Day Two.

This round saw the pairing of two friends and competitors from the Top 8 of Grand Prix Anaheim. In fact Ben Stark conceded to his good friend Peter "PTR" Szegeti in Anaheim to ensure he would have a berth in the Top 8.

Ben was unhappy with his deck for this event and had three rounds to think about whether or not he built it correctly. PTR on the other hand only had two byes and had to play last round. He won the match when his opponent from the last round was DQ'd for throwing an object at him in full view of the judges.

This may seem ironic in light of PTR's well-chronicled adventures at high level events but Magic's bad boy has been showing a new side at his last few events. He has been quieter and more serious-during the play of his matches anyway. It was suggested by several players in the know that he would like to be recognized more for his play than his antics.

As his opponent from the previous round sauntered by to watch the match, PTR had to laugh, "Write about this guy, my last round opponent. He was DQ'd for throwing a dime at me."

Ben made a mock-horrified face, "Dude, throwing a dime is pretty violent."

While Ben was kidding with the dime-thrower he began to shuffle PTR's deck and his friend was taken aback by it. "This is offensive to me."

"I would shuffle anyone this much."

"Would you shuffle Ant this much?" asked PTR, referring to mutual friend Antonino DeRosa.

"Ask Ant if I shuffle him."

PTR just shook his head in disgust-it was unclear if it was real or feigned.

Peter opened with Bonesplitter. Neither player made another play until turn three when Ben cast Tel-Jilad Wolf prompting a quick, "What does this do?" from PTR. He played a Nim Shrieker and had no blocks when the Wolf attacked. Ben played a Condor and passed the turn. PTR Essence Drained the Condor and attacked.

Ben passed the turn back with five mana open and PTR wanted to know how much the Tangle Spider cost. When he was assured it cost six he attacked. Ben swung for two on his next turn and passed the turn with six mana in play. "That is Spider mana." Declared PTR. Although Ben did not have the Spider he did have Wail of the Nim and killed the Nim Shrieker.

Quicksilver Behemoth was Terrored and PTR played a Neurok Prodigy and a Spikeshot on the next turn. Ben played an Arcbound Bruiser but PTR was able to kill it with his Spikeshot and Bonesplitter. PTR annulled a Tangle Golem somewhere in there as well. Ben killed the Prodigy with Screams from within but all it did beyond that was make a Scarab smaller. PTR drew a Vulshok Morningstar and Ben was unable to remain in the game.

PTR glowered as Ben shuffled him again. Ben protested, "Ask Ant! I would shuffle my sister if she played Magic."

PTR played an Arcbound Stinger and a Neurok Spy. Ben wiped them both out with Barter in Blood. "You got me good." PTR played a Neurok Prodigy and passed.

Ben had a Goblin War Wagon waiting his fifth turn. PTR was out of land and played a four mana Frogmite and shook his head at paying full price, "How about that one?"

"I have seen better," agreed Ben

Ben played a Nim Shrieker and a Leaden Myr after bashing in for three with his Wagon.

PTR got in for two with his Prodigy and played his own Shrieker and a Bonesplitter. PTR equipped his Nim Shrieker and sent both of his fliers into Ben's abundant mana. Ben played a Tangle Spider and PTR exclaimed, "You're tricky, you're filthy. You tried to make me think you did not have a Spider." The spider ate the Prodigy and Ben took the damage from the Shrieker.

Ben just smiled and attacked for seven with his Shrieker and War Wagon after playing a Condor. PTR was the picture of concentration on his turn as he surveyed the board. For all of his bluster and showmanship, PTR takes the game pretty seriously and is a fierce competitor. After much thought he Essence Drained the Condor and sent all of his men into battle. Ben put the Tangle Spider in the way of the Shrieker and a Myr in the way of the Pewter Golem. Ben killed the Golem with a Predator's Strike and PTR saved his Shrieker with the Crystal Shard.

Ben attacked PTR down to five and played a Tel-Jilad Exile. PTR equipped his Frogmite, replayed his Shrieker and passed the turn. Antonino came by and commented on the quality of PTR's cards, "Crystal Shard, that's not even like playing Magic." Ben sent his War Wagon into the red zone and PTR saved it with his Shard. Ben played a Clockwork Vorrac and sent the turn back with one mana open for the Crystal Shard. 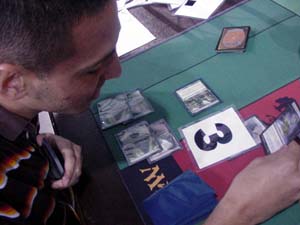 Both competitors fell into silent mode as the game came down to very precise decisions by both players. PTR's position was fading despite the Shard and a trampling Vorrac could make things tough on him. He tapped out and played Spikeshot and Frogmite using his last bit of mana to equip the Frogmite.

Ben sent everyone into battle on his side of the table. "Thinking," muttered PTR as he contemplated blockers. PTR lost everything but the Spikeshot and fell to one. He equipped his Spikeshot with the Bonesplitter and Ben was out of gas.