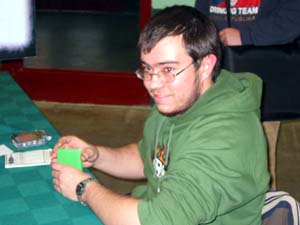 long wait is finally over for the three-bye players. They've enjoyed their rest and now they have to shuffle up their decks. Rosa earned his spot by ranking or Pro Tour points while Horno earned his by trial.

Horno was the first to blink with Leonin Skyhunter but De Rosa quickly put it away with Terror. Marcos tried Arcbound Hybrid and Antonino slowed him down with Chiterring Rats.

Antonino (looking at the spectators): "You are a hometown favorite. The crowd wants you to win."

The Hybrid grabbed a Skullclamp and the American took the time to elaborate on how good the card is before nullifying the attack with Icy Manipulator. Still unimpressed the Spanish played Fangren Hunter. Once again the controlling Antonino stopped him dead on its tracks - this time with Arrest.

Finally, Marcos passed the turn without a play. The Rats waltzed into the Red Zone and a Goblin War Wagon joined the American's side of the table.

The Spanish redid his battle plan and unleashed Solar Tide with Entwine. His Skullclamp gave him some extra options while De Rosa bounced right back with Culling Scales and Razor Golem. The Icy denied Horno his second Green mana but he had Raise The Alarm to draw some extra cards.

Antonino: "You are drawing a lot of cards, my friend."

Still Marcos Horno had nothing to stop the Scales from eating up his Skullclamp. The amazing artifact was gone but had six extra cards from it. He played Loxodon Mystic to keep things under control but De Rosa's Icy was on fire.

The Razor Golem attacked and Leonin Abunas came into play to protect the team.

Antonino: "For the people out there... my deck is looking really good but it's actually really bad. I'm drawing all my good cards."

On the next swing Horno dropped a surprise Tangle Spider but the Icy kept it out of the blocking game. With no blockers available Antonino De Rosa played Stir The Pride to finish the first game.

The American had to send his first hand back but seemed happy with his second one. Horno came out first with turn-two Silver Myr and turn-three Whispersilk Cloak. Across the table a Yotian Soldier showed up, quickly followed by Scavenging Scarab. Marcos played Raise the Alarm and used Creeping Mold to blow up De Rosa's lone Plains. 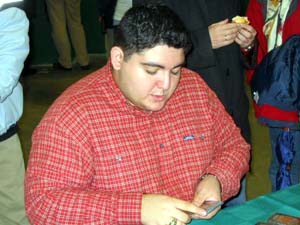 He played a second Scarab saying he was trying to fish out the Wrath (Solar Tide) He thought Horno had in his hand. On and on the equipped Myr attacked, while Arrest shut down one of the Scarabs. Finally Antonino found another Plains and played Taj-Nar Swordsmith fetching Leonin Scimitar.

The Spanish was falling behind visibly, and a turn later he showed a hand full of lands and Skullclamp. Although Skullclamp is good, it can't do much if you don't have enough life to work with.