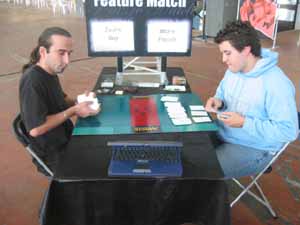 The first three rounds have come and passed - in a flurry of Goblins, Angels and the like - and now the three-bye players finally get a chance to flex their muscles. Our first Feature Match revolves around an Italian player.

At Grand Prix London, two player stormed the field with what was then a nearly unknown archetype: Blue-White Control. One was Brian Kibler, who finished the GP in ninth. The other was an Italian who made the Top 8. Marco Pascoli.

So we came over to see if he is still playing the deck, and how he fares against Frenchman Guy Joulin. As it turns out he wasn't, relying instead on Red-White. His opponent was playing Goblins, and won the all-important dice roll.

For a Goblin deck, Guy sure come out "slow". Second turn Piledriver, third turn Warchief. Pascoli played Lightning Rift and cycled Incinerator to kill the Warchief on the following turn. Joulin didn't seem to have more creatures so he played Sulfuric Vortex.

The Italian answered with Silver Knight and sat back. This gave Guy a chance to reach five mana and drop Siege-Gang Commander. For the first time in the game one of them stopped to think. Pascoli surveyed the field, stared at his life total and looked for the best way out of his mess.

He was at eight, under a Vortex, with just the Knight, staring at a Piledriver and the Commander with his full gang. Finally he made up his mind, dropping a second Rift and a second Silver Knight.

But Guy was in no mood for long games. He played a Clickslither, sent everyone into the Red Zone forcing the Italian to scoop his cards. The game lasted less than six minutes.

Marco (shaking his head): "I needed to draw some lands."

Guy's first turn Prospector was promptly torched by a cycled Incinerator. A second turn Stabilizer stopped any further cycling nonsense so Pascoli turned to morph instead. He played a turn three morph but couldn't find the crucial second White mana.

Meanwhile Joulin was busy dropping creatures: Sledder, Piledriver and Clickslither. The morph blocked the Piledriver and Joulin sacrificed the Sledder to keep it. Then Pascoli surprised everyone: his morph wasn't Exalted Angel. It was a Daru Sanctifier.

The Frenchmen was so confused, especially with the growing noise from the Italian public, he tried to cycle a Incinerator under his own Stabilizer. Instead he played it and attacked with the Clickslither. A Sacrificed Piledriver later the blocker was gone.

Pascoli played his SIXTH land but still had no second White. Guy dropped Goblin Sharpshooter and sent the Clickslither in again, strangely leaving the Incinerator behind. A end of turn Shock took out the Sharpshooter but Pascoli was still in a world of trouble.

A turn later he solved most of it. A Starstorm for five took out the Clickslither and Incinerator when a second Incinerator was about to come into play. Guy played a Siege-Gang Commander on the next turn but AGAIN Pascoli used Starstorm to clean the table.

They both played "Draw-Go" for a few turns clearly benefiting Pascoli who finally found his second White. He used it to play Eternal Dragon. The two Starstorms had turned the table.

A Sledder tried to fight back, but even with two Goblin Burrows that Joulin neglected to use, it was too little, too late. The Dragon always wins the long games.

With twenty-four minutes still on the clock they shuffled up for the decisive game. Joulin had no qualms sending his hand back. His second hand seemed fast enough when he played a first turn Goblin Sledder.

Pascoli answered with Silver Knight, keeping Joulin out the Red Zone when he played Goblin Warchief. To power through the Knight he played Sharpshooter and Incinerator, but kept them all back, fearing the backbreaking Wing Shards.

The Italian took the extra respite to landcycle Eternal Dragon and Shock the Sledder. The crowd was clearly getting to the Frenchman who forgot to use his Sharpshooter. Who says there is no such thing as home court advantage in Magic?

A cycled Incinerator took out the Sharpshooter and Pascoli felt confident enough to send his Knight in, dropping a morph to hold the defense. Joulin played a somewhat sketchy Vortex. He sent his crew in and again Pascoli used his surprise morph (Daru Sanctifier). But this time he had an enchantment to break. The Warchief died.

The Italian was so confident he had no problems just trading damage with the Goblins. On and on his two White creatures raced into the Red Zone. Joulin could do little to battle back and as soon as Pascoli played Eternal Dragon he knew there was no way out of it.