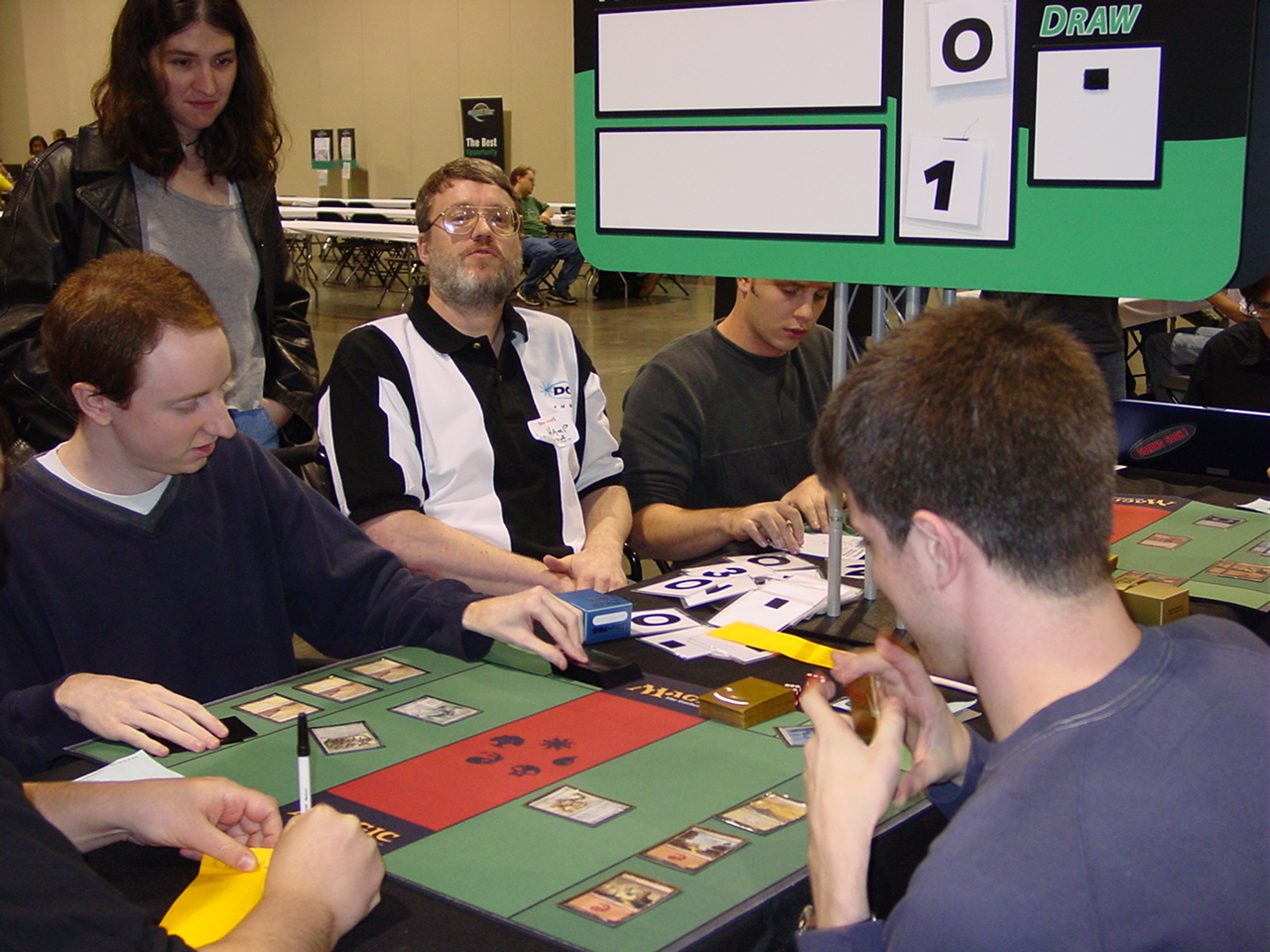 All the byes are out the way and the options for feature matches each round get better and better. This round offers a compelling study in contrasts. Former US National champion Eugene Harvey is one of the most composed players on the tour. His opponent is rising Canadian star Mark Zajdner. Mark is anything but composed. He is a frenzy of motion with a full range of facial gestures and body tics to punctuate every sentence.

As the two players sat down in the feature match area Zajdner was pessimistic about his chances. “Eugene is going to smash me…my deck is so bad.”

Mark only had two buys and this is his second actual match on the day—Eugene had the full complement of three. “Your deck can’t be so bad if you actually won a real match.”

Zajdner ignored the former champion, “C’mon! He was building next to me and his deck is so broken. It took forty mintutes for him to sort through all of his broken cards. I was really hoping to play a three-bye pro with a bad deck this round.”

Perhaps Eugene wasn’t as confident in his deck as Mark thought he should be because he nodded in agreement and eyed Neil’s opponent at the next table greedily, “Or a Grand Prix Trial winner.”

After a rather animated display of dice rolling Eugene won and after much deliberation decided to play. He came right out of the gate with an Auriok Transfixer. When he had no follow-up play for turn two Mark goaded him, “Nothing, no curve?”

The Transfixer got in for two points and was joined by a Wizard Replica. Mark’s first play was a turn three Yotian Soldier. The Wizard flew over for a point and Eugene added a Stalking Stones and a Vulshok’s Gauntlets to his board. On Mark’s turn, Eugene tapped the Yotian down with his Transfixer and Mark played a Cathodian.

Eugene played an Alpha Myr and equippedthe Wizard Replica with the Gauntlets but had no attacks. “Go? So that doesn’t untap?” Mark played an Icy Manipulator and promptly tapped down the Alpha Myr. Eugene took four from the Yotian and the Cathodian. “This is probably the best card I could draw against that equipment.” 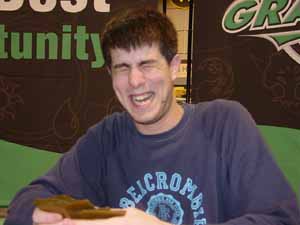 Eugene took advantage of a the tapped out Canadian and put his equiptment on the Alpha Myr and took Mark down to eleven with his attack. He was able to keep the Cathodian at bay with the transfixer and he was taking a point a turn from the Yotian. Mark played another artifact creature in Soldier Replica.

Mark was able to tap the 1/3 flier with his Icy while Eugene’s Myr was till locked down under the Gauntlets. Eugene played a Goblin Warwagon which would be able to get around the drawback of the Gauntlets for two mana each upkeep. Eugene was holding Shatter but had nothing but Plains and a Stalking Stones in the board.

Mark’s Cathodian continued to get tapped and he played a Pearl Shard. When Eugene played a Mountain on the next turn he slumped, “How lucky.” Eugene Shattered the Icy and put the Gauntlets on his Wagon. Mark put a Soldier Replica and a Yotian Soldier in the way and traded the two creatures for the Wagon.

Mark tapped out to play a Goblin Dirigible and frowned at the Transfixer, “That guy is sooo good.”

Eugene tapped the Dirigible with his 1/1 and rumbled into the red zone for seven. “I have to agree.” He fortified with an Atog.

Mark continued to bemoan the Auriok Transfixer. “That guy owned me this game. It is not looking good.” He played a Clockwork Dragon but Eugene was able to tap it and swing in for the kill. “Holy cow! That Transifixer!”

Eugene had a simple solution, “Stop playing so many artifiacts.”

Mark laughed, “Good answer! If he doesn’t have the Transifxer there is no way he can win.”

“I’ll draw,” shrugged Mark. “That’s what everyone says to do.”

Eugene was unconvinced that this was the correct option but he did not know for sure, “No one knows yet. I was hoping I would lose the die roll.”

Both players put Myr into play on turn two. Eugene was unwilling to attack with his Leaden Myr into the Silver Myr and Mark thought that would allow him to get in for a free point. Eugene seemed pleased to ambush the Myr with an instant speed Needlebug. Mark sighed and played a Soldier Replica. 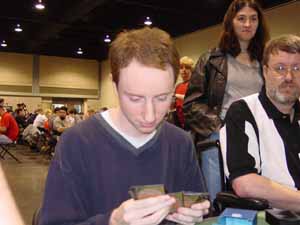 Eugene slammed eight points of damage into the red zone on the next turn when he enchanted his Myr with the Guantlets. “I don’t have any cards I can draw to help me here,” complained Zajdner although he may have been playing possum. When Eugene pushed all of his guys into the red zone on the next turn Mark chided him, “You don’t even declare your attck phase?” Blinding Beam tapped down Eugene’s team but he had more wainting in the wings and played an Atog and Yotian Soldier.

Mark tapped out to play a Goblin Dirigible to stand on the frontlines alongside his two surviving Soldier Replicas. Eugene pondered his best course of action and Mark played to the crowd, “Holy cow is my deck bad!” He pointed to his Soldier Replica and explained, “This guy is good. Three of him…not so good.”

What are you thinking Eugene? Like you can lose this game?” That seemed to prod the former champ to action and he put the Gauntlets on his Yotian and sent it into the red zone. Mark was wary of a combat trick and had to to figure out how he wanted to block. Ultimately, he put the Dirigible and a Soldier Replica—he was tapped out and could not activate it—in the way. Eugene did not need a trick, he had the six toughness of the Yotian working in his favor and Eugene killed the Dirigible without losing his guy.

Mark threw his hands up in disgust at his error and conceded on the next turn claiming the game was hopeless. Ken Krouner had wandered over and agreed, “You can’t defeat Eugene Harvey.”

“Not with this deck,” agreed Mark.