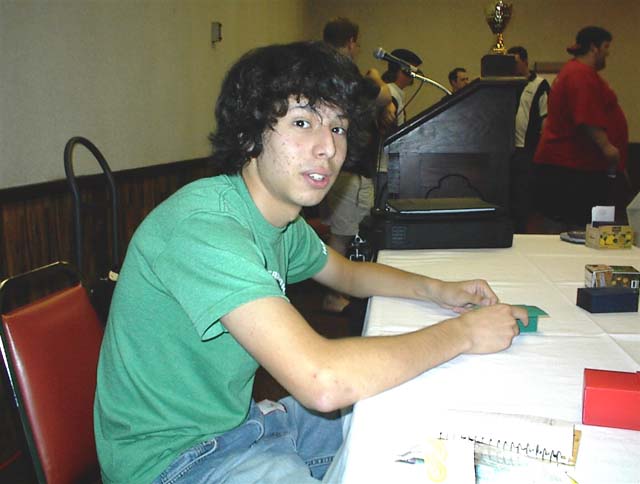 Ben Price, a player from Danville, Kentucky and college student at Bellermine University is playing the Red Green deck that most of his friends are playing at this event. Ben does not have the time to game as often as he used to, but he is one of the favorite players in all of the area. Ken McAlpine is a high school player from Somerset, Kentucky. He is playing Blue Green madness.

Ben Price won the roll and choose to play first. Ken drew his seven cards and spelled out the word Yo. (You should see the picture for details.) Both players kept, and Ben started the game with Forest, Elf. Two Rootwallas and another elf joined the force for Price while Ken cast a Merfolk Looter. He passed the turn hoping that the Looter would become active, but a Firebolt made sure there would be a fish fry. The rootwallas and an elf took to beating the snot out of Ken. Quiet Speculation from Ken put 2 Roar of the Wurm and a Deep Analysis into his graveyard. Rootwalla jumped in to play for Ken and he passed the turn. Price’s Basking Rootwalla squad came racing past the lazy lizard that McAlpine summoned. Ben had nothing more then a third a lizard to bring into play, and passed back to Ken. Ken made a Wurm token on his turn and passed. Ben attacked with all three of his rootwallas. He pumped the two that did not get blocked by the Wurm token and took Ken to nine. Phantom Centaur joined Ken’s team, and it looked like Ben Price’s offense was about to coming crashing to a halt. Ben thought, and wisely decided to keep his horde of lizards and elves back from the onslaught of centaurs and wurms. Ken successfully attacked for six with the Wurm token before he added a second to his team. Ben Price drew a Mossfire Valley, looked at his options., and cracked a horrible joke. Ben passed the turn with out doing much of anything and hoped that Ken would stop the beat down that was coming. Both Wurms came into to attack Ben, and after he thought about his blocks for about three days, decided to toss an elf in front of one of the big beasties. Ben sat at six life. After drawing yet another useless land, he passed back ready to block a bunch of huge creatures. Careful Study off the top put a Wonder into Ken’s graveyard, and Ben shuffled up for game two. 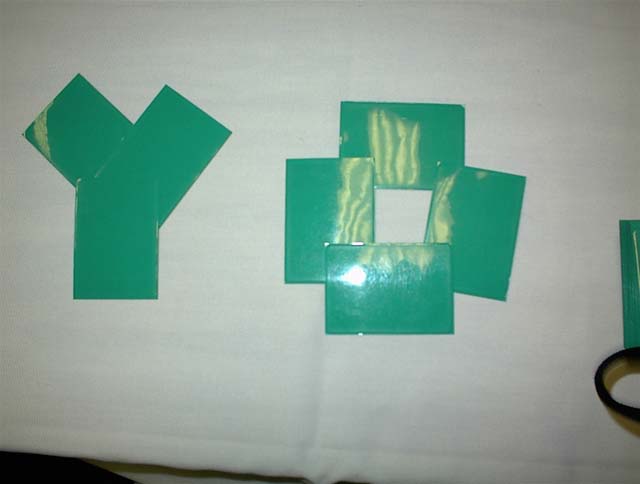 Both players kept their opening hands for game two and Ben price led off with the ever dangerous Grim Lavamancer. Ken answered with Careful Study, discarded a Wurm and an island and passed. After he attacked McAlpine with the Lavamancer, Ben added a Wild Mongrel to his team. Ken was backpedaling, and had to cast any kind of madness outlet. Aquamoeba came into play for Ken, but Ben was with the ready and hammered the beast away. Stupefying touch came down for Ben’s Wild Mongrel, and a second careful study put an island and a Merfolk Looter into Ken’s graveyard. Krosan Reclamation showed that Ben Price’s deck did indeed come out of last year’s Odyssey Block tournaments, but at least reshuffled a Roar of the Wurm and an Island. The attack from Ben took Ken to twelve, and Ken finally cast another creature, Wild Mongrel. Ben threatened Ken’s Mongrel, which was Unsummoned before he had to take more damage then he really could afford to. Wild Mongrel came down again for McAlpine, who went to seven after a shock from the Lavamancer. Ken had another touch for the second mongrel.

“I’ve got some really dumb dogs on my side of the table.” commented the attacking Price. Ben attacked into Ken’s Mongrels, and Ken correctly discarded his last two cards to save his team. Oh, those two cards were Basking Rootwallas. Ken sent his team into Ben’s almost clear board, and hit Price for five. Ben played Call of the herd, which resolved for him, and passed the turn. Ken attacked with his same crew again, and traded a Mongrel for an elephant token. He still hit for 5. Ben was in a world of hurt. He ripped three consecutive lands, and had no outs. He thought, tried to make things work in his little world, and flashbacked the Call of the Herd. Ken mistakenly held back a Rootwalla in his attack phase, but had the Roar of the Wurm to flashback after his attack step. It mattered not though, Ben decided that he wanted to actually win a game this round, and ripped a Violent Eruption off the top of his deck. This spell resolved, knocking Ken to one, and the active Lavamancer finished the deal. 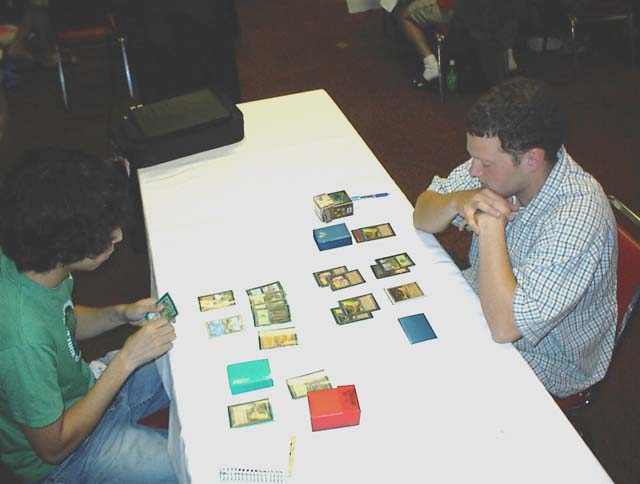 Game three started with about thirteen minutes left in the round. Ken decided to play first, and both kept their hands. Ken plays an island, study, Rootwalla and discarded a Turbulent Dreams along with it. Ben has the bolt for the lizard, and McAlpine followed it up with a Mongrel. Ben has one of his own though. Ken attacked for two with his mongrel, played a land and let loose with the devastating Quiet Speculation. He got Deep Analysis, and two Roar of the Wurm again, and to no ones surprise passed the turn. Ben attacked back with his mongrel and like a champion had the Rootwalla to go with it. A Volcanic hammer after the attack step killed off Ken’s Mongrel, but Roar of the Wurm looked to toss Ben’s world into a downward spiral. The Wurm token stepped in front of a pumped Walla, and later died to a Volcanic Hammer. Another Wurm token came into play for Ken. It looked bleak for Ben Price. The token bum rushed Price, and study brought a Rootwalla into play . Phantom Centaur came down for McAlpine and just put the finishing touches on a fourth consecutive victory for Ken.