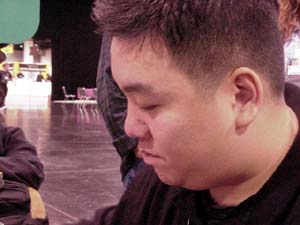 Tsang, or Terry T as his Legion of supporters call him, is one of the most popular players in the room. Like many a Magic veteran, Terry has drifted in and out of the game. He is currently trying to get back onto the gravy train. He and his opponent both had outside shots at making the Top 8 if they won this round. Terry was playing Twiddle Desire.

His opponent was David Ochoa, or the Web as his friends from the San Diego area know him. More at home playing with Type 1 cards than anything else, David had piloted Red Deck Wins with abundant artifact hate to within one match of a shot at the Top 8.

Terry held up a Canadian coin and offered to flip, "Call it…Moose or Queen!"

David led off with a land and a Chrome Mox. Terry had only an Ancient Tomb and that was promptly Wastelanded on David's second turn. Terry had no second land and played a Chrome Mox imprinting Trade Secrets.

David put out a clock in the form of a Jackal Pup and used the Shattering Pulse in his hand to smoke the Grim Monolith that Terry played on the next turn. David played a morph. Terry played a Sapprazan Skerry but it was fated to be Pillaged.

Finally Terry played a Seat of the Synod and was able to Tinker it away. It was obvious that he though he was going to win since he started smiling broadly and counted off his spells. He used Burst of Energy and Dream's Grip to generate enough mana to cast Mind's Desire with one mana floating.

Terry asked if he could just flip up four cards but David said, "You can just shuffle." Terry played a Gilded Lotus and a Monolith for free and cast Diminishing Returns with two blue floating. Terry twiddled and Energy Bursted his Lotus to have enough mana to cast Tendrils as the tenth spell of the turn.

Remember Terry's Legions of supporters? After seeing Terry pull off the combo they wished him luck and wandered away to play Highlander.

Terry did not keep his hand, which contained a pair of Tendrils. He kept his next one but he David came out armed for bear this game. He opened with Port and Chrome Mox and had a second turn Stone Rain for Terry's Sapprazan Skerry. Terry had another. David played a Grim Lavamancer and tapped the Skerry on his upkeep. Terry had no second land.

David made a Slith Firewalker and sent it into the red zone with the Lavamancer. He then Wastelanded the Skerry. Terry discarded on his next turn and took three on David's next attack step.

Terry played a Skerry and a Chrome Mox but David responded to the imprint with Shattering Pulse and whatever slim hope Terry had of going off were shattered.

"C'mon turn one kill!" Terry didn't draw the kill but he liked what he saw enough to keep it. David did not and sent his cards back for six fresh ones. Terry opened with Skerry. Dave had the Jackal Pup.

Terry untapped and played his Monolith and Tinkered it away for Gilded Lotus. He then Tinkered away Seat of Synod for another Lotus. Terry then announced he would take mana burn and pass the turn.

David played a Mountain and Chrome Mox to cast Rack and Ruin on both the Lotuses. There was a collective groan from the crowd as it happened. Terry played another Skerry and said go with his head shaking. 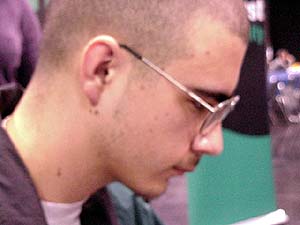 Terry took repeated beatings from the Pup as he tried to build back his hand. When he played a Seat it was Shattering Pulsed with Buyback. On the next turn David had the Wasteland for the Skerry with two counters. He followed that with a Port.

To make matters worse he drew another Wasteland.

Terry shook his head, "I figured the worst that could happen-"