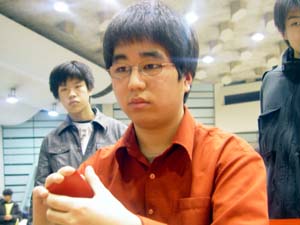 most players, a successful tournament will lead to one key match towards the end. For Hirabayashi and Lee, that match is now. The winner will most likely make Top 8, and the loser will probably have to be content with a money finish. Both players shuffled up and prepared to play, but were picked for a deck check. Hirabayashi got up and walked around, while Lee sat at the feature match table, obviously a bit nervous and taking a moment to focus. When Hirabayashi and the decks came back, the tone at the table was nothing short of completely serious.

Hirabayashi accelerated with Mox Diamond on his first turn, using it to play a Burning Wish that searched up Buried Alive. Lee summoned Skirk Prospector, and Hirabayashi used Buried Alive to put Sutured Ghoul and two Krosan Cloudscrapers into his graveyard. With this kind of explosive draw, time was not on Lee's side. He attacked with his Prospector and had no other plays. Hirabayashi cast Brainstorm, and used Burning Wish a turn later to get Exhume, putting a 26/26 Ghoul into play. Lee seemed to have a great out in Living , but Hirabayashi responded with Fling to take the first game.

Hirabayashi mulliganed down to six. Lee had Duress to take away Buried Alive, leaving only Brainstorm and lands in Hirabayashi's hand. Lee played a Prospector, and used a Matron on the following turn to get Siege-Gang Commander. Hirabayashi had played Bloodstained Mire, and used it with the Brainstorm to improve the card quality of his hand. He then cast Burning Wish, searching up Buried Alive. Lee attacked for two with his Goblins, and sacrificed the Matron to the Prospector to get the Commander out. Hirabayashi played Damping Matrix, which would slow down Lee's assault a bit by nullifying the Commander's special ability. With the help of Mox Diamond and City of Traitors, he was able to cast Buried Alive in the same turn. This left him with one card in hand, and one turn away from a win. Lee attacked, and cast Haunting Echoes, which got a shock out of Hirabayashias he scooped. 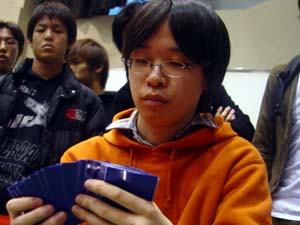 Once again, Hirabayashi mulliganed his opening hand. He played a second turn Burning Wish to get Buried Alive, and Lee played a Wish of his own to get Decompose. This set Hirabayashi back quite a bit, as he would need Duress or enough mana to play Buried Alive and a reanimation spell in the same turn. A few turns later, Lee cast Cabal Therapy to get Buried Alive out of Hirabayashi's hand, leaving him with Polluted Delta, Fling, Sutured Ghoul and Mystical Tutor. He attacked with his lone creature, a Goblin Piledriver, and cast a second. The Piledrivers attacked, and a Matron fetched Goblin Warchief. The Matron was now sacrificed to flash back Cabal Therapy, and Hirabayashi responded with Mystical Tutor for Burning Wish. The Therapy now resolved, getting Fling out of Hirabayashi's hand and leaving him with Sutured Ghoul and a land. He drew and played the Wish, getting Pyroclasm to kill the Piledrivers. Lee simply cast Living and brought everyone back, including the Matron to gain even more card advantage. This was enough for Hirabayashi to concede, sending Lee to the Top 8.