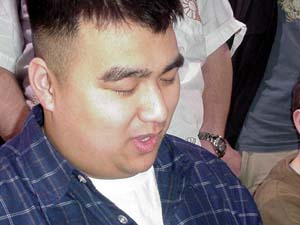 had drawn last round with his friend Gabe Walls. He still needed to win this round in order to have a shot at Top 8. It would be his second Grand Prix Top 8 in as many tries. Rietzl's adversary this round was popular San Diego player Phuong Tran. "Everyone calls me ISP though. I don't know why though."

Neil Parker was among the spectators and he explained (without really explaining anything), "It stands for Industrial Strength Phuong."

Tran was looking like a lock for the Top 8 when he went up a game on his opponent in the previous round. A decklist examination turned up a registration error. He left a Great Furnace out of his played column resulting in an illegal thirty-nine card deck. When the judges took each player's decks he was understandably nervous, "Not again please."

While they waited for their decks to be returned, Paul entertained the crowd by forcing Phuong to play War with the laminated numbers used on the Feature Match scoreboard. Paul was distracted when Head Judge came walking toward him, "What did I do?"

There was no problem but Sheldon teased him, "If you admit to it now I will go easy on you."

"I built my deck wrong."

Both players kept their openers. Other than some worn sleeves there were no problems with the decks. Paul led off with an Auriok Transfixer and got in with it twice while Tran played lands. On his third turn, Paul was able to play a Razor Golem thanks to three Plains on his side of the table. Tran played a Great Furnace and put out a Krark-Clan Grunt.

Tran fell to fifteen on the attack from the Golem and Paul played another Transfixer. He used the first one to tap the Great Furnace on Tran's upkeep. Tran played a Tel-Jilad Wolf prompting Paul to compare it to an Invasion block card after he was forced to read it for the first time.

Paul played a Loxodon Mystic on his next turn-tapping out to do so. Phuong took the opportunity to Shrapnel Blast the elephant on his next turn. Paul looked at his next card and surveyed the board, "Let's go for the gold here." He played a Vulshok Gauntlets and equipped the Razor Golem. Tran took the attack and fell to five.

He played a Gauntlets of his own and equipped his Grunt. Paul attacked with everyone on his next turn and was disappointed with the results. Tran chumped a guy and ate a Transfixer taking only one. "I made a mistake I think." He played an Arcbound Bruiser and passed the turn.

Tran tapped out for a Goblin Dirigible and Paul was not sure how to play it. "I think the Hump would play it this way. I wouldn't but here goes…" He played a Skyhunter Patrol and passed the turn with no attack. Tran had no play and when Paul tapped the Dirigible EOT he scooped up his cards.

Phuong was really hoping to draw a Mountain when he kept a hand with Slith Firewalker and only one red source. Paul had the Arcbound Worker and followed it with a Pteron Ghost when Tran's deck failed to yield the second red. He played a Damping Matrix on turn three and Paul was taken aback, "What the-Judge! Does this stop modular?" It did not and Paul relaxed-sort of.

On his turn he played a Talisman and cast Vulshok Gauntlets. "Does this mean I can't equip creatures?" It did.

Tran let out a deep sad sigh when his deck did not give him land number four. Paul played an Arcbound Bruiser. Tran found a Mountain on top of his deck next turn and Paul teased him, "Ah man, now there are two lucksacks in this match." Tran made as if to strangle his opponent but instead played the Slith Firewalker with no attack.

Paul turned to the judge, "You're sure I can't equip?'

When he didn't get the answer he wanted he turned to the spectators, "What about the rest of you?"

The crowd laughed but stood by the judges ruling, "Fine if you're all against me I'll just attack."

Tran traded the Slith for the Worker and the Bruiser became a 4/4. Another Forest form Tran allowed him to play a Tangle Golem. Paul could only attack with his Pteron Ghost and pecked him down to ten.

Tran used Journey of Discovery and Paul kidded with his mana choked opponent, "Which ability of the card?" Tran glared at him and picked up his deck. Before he pulled out a land Paul announced, "Island. Green-red always gets Island." He was correct and Tran did get and Island as well as a Forest.

Paul attacked for one and played a Skyhunter Patrol. Tran sac'd his Furnace and Shrapnel Blasted it out of the sky. "Man down." 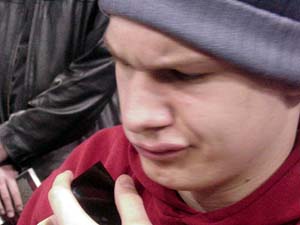 Tran cast Duplicant on his next turn and removed the Arcbound Bruiser from the game. He shook his head as he realized that Paul had no other artifact creatures. The correct play would have been to blast the Bruiser EOT and then Duplicant the flier. As he played it the Duplicant became a 0/0 when it copied the Bruiser and it promptly died.

Tran played an Ogre Leadfoot to hold the ground but when the top of Paul's deck churned out a Barbed Lightning with entwine the disgusted Tran scooped. "I messed up. I should have killed the Bruiser."

Paul Rietzl was headed to his second straight GP Top 8.