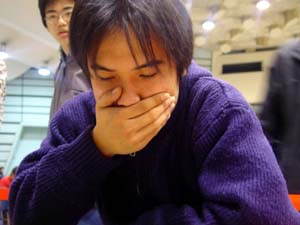 When I asked the top Japanese players who was most likely to be the first Japanese Pro Tour Champion, Itaru Ishida's name seemed to come up more than anyone else. He's been involved in competitive Magic since the beginning of the Pro Tour, and has made a career out of consistent finishes. The respect from his peers, suggesting that he will be the man to finally bring a Pro Tour title home to Japan, speaks volumes about his talent. His opponent, Osamu Fujita, is of course the "Silver Collector". Fujita just added $20,000 worth of silver to his mantle with a second place finish at Pro Tour Amsterdam last week. He's carried that momentum back to Japan, as he started off day one of this event at 8-0. Ishida is the only other undefeated player in the tournament, so the winner here will be the lone competitor without a loss.

Ishida played a first turn Careful Study, discarding Phantom Nishoba and Duress. Exhume brought it out on turn two, and Fujita's Goblins couldn't possibly fight off the life gaining monster. It attacked, and a second one came into play on the following turn via Reanimate to clinch the game. 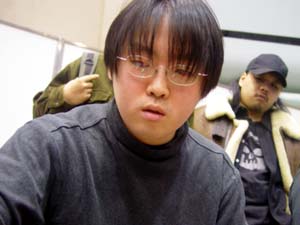 This game was more bad news for Fujita, as Ishida cast Careful Study, discarded a Nishoba, and brought it back with Exhume. Fujita had out two Prospectors and a Sparksmith at this point, and played Goblin Sledder. When the Nishoba attacked and damage was on the stack, Blood Frenzy killed it off. Ishida seemed to be in a little trouble, but played Powder Keg to fend off the Goblin attack. Fujita attacked with his team to deal four damage, and played Goblin Matron to search up Siege-Gang Commander. Ishida cast Vampiric Tutor followed by Careful Study, discarding Akroma. The Keg burst for one, leaving Fujita with Sparksmith and a Matron, with the Commander coming out right away. Ishida played another Tutor, untapped, and Reanimated Akroma right into play. It seemed Ishida was in danger from a counterattack, but he had been planning things out. Now that he had his indestructible creature out and swinging, he played Energy Field to ensure he'd be safe while she did the rest.