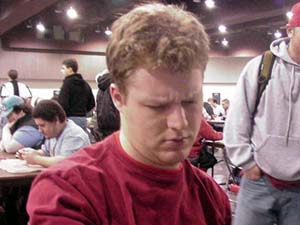 Alepin was not happy with how his deck turned out. He had many solid black-green cards but was worried about getting run over. "I was looking for Myr and I just did not get them. My deck is kind of slow."

He was also concerned about his first pick Skeleton Shard. "I probably did not get enough guys to make this good. It was either Shard or Domineer and I don't like to be blue."

His opponent was disappointed with his photo from yesterday's feature match. "When you take my picture…could you not shoot me from a down angle? I have this extra half chin and when you shoot head on it looks like a normal chin. Not that I'm vain or anything."

Ben was on the play and when his opponent mulliganed Ben consoled him, "My hand is not that great."

Neither player made any plays until Ben's turn three Neurok Spy. A Tel-Jilad Wolf followed from Alex. Ben chose not to attack into the Wolf and played a Chromatic Sphere and a Frogmite. Alex played an Arcbound Hybrid and attacked for four. Ben took it and returned service. He attempted to hold the ground with a Quicksilver Behemoth but it was Terrored on Alex's turn and Ben took four more.

Ben cycled his Chromatic Sphere making a green mana-likely to just give Alex something else to worry about-and used the mana to Shatter the Hybrid without any other artifact creatures in play on Alex's side of the board. Alex took another four damage. Alex got in for two with his Wolf and played an Arcbound Fiend.

Ben tapped the Fiend with a Psychic Overload and attacked for four but Alex untapped it by pitching a Vorrac and Arcbound Overseer and ambushed the Frogmite. Ben played another Frogmite.

With the untapped Fiend blocking the way the two players were only trading two points a turn-Ben's Spy and Alex's Wolf. Alex threatened to break parity when he played his Skeleton Shard. Ben's game ground to a halt as he contemplated the implications of the Shard on the damage race. He finally sent in his Spy and left his Frogmite and a Sliver Myr back to watch the gates.

Alex returned an Arcbound Hybrid EOT and returned a Vorrac on his own turn. He played the Vorrac and attacked with the Fiend and the Wolf-both players were at six. Ben could finish his opponent off in two turns with Spy and a Blinkmouth Nexus and he chump blocked the fear guy with his Silver Myr. He fell to four.

After his draw Ben declared, "It would be hard for that draw to get much better." He played a Domineer and took the Clockwork Vorrac. Once again Ben's pace slowed to legendary speed. Finally he got in for the predicted three and passed the turn. Alex stole a counter off of the Vorrac on upkeep. He returned his Overseer and pitched it and the Hybrid to untap his 4/4 creature. He sent both of his men into battle and ate both of Ben's creatures.

Ben went in for the kill on his turn but wrinkled his nose when Alex ambushed the Nexus with a Tangle Spider. Alex was critical of his own play after the game-and Ben's play in the process. "I made a mistake. If you don't block the Wolf there I lose the game-I shouldn't have attacked."

Ben opened with a Blinkmouth Nexus and served for one on the second turn. Once again he had third turn Neurok Spy. Alex played a Culling Scales on his third turn. Ben served for three with his soon to be departed Spy and the Nexus. Alex killed the Spy but had no fourth land or play on the next turn. Ben played a Somber Hoverguard and Alex lost the Culling Scales on the next turn. He found a land and was able to play a Tangle Golem. Ben's Quicksilver Behemoth tried to get in the way but Alex had Predator's Strike and followed it with a Terror for the flier on the next turn.

Ben had another Behemoth and Alex passed his next turn with no action. He was still stuck on four lands. Ben got in for one with his Nexus and played a Vulshok War Boar that cost him a Tree of Tales. Alex played a Needlebug EOT and played a Fireshrieker that he could not equip anyone with until next turn.

Ben was holding a pair of Psychic Overload but was wary of losing a creature in combat again with five cards sitting in Alex's hand but ultimately he cast one and attacked with his Nexus and War Boar. Alex pitched a Gilded Lotus and an Arcbound Fiend and traded the Golem with the War Boar. He played a Tel-Jilad Wolf on his next turn.

Ben attacked with his Behemoth and replayed it-Alex fell to seven. Nim Devourer joined the team on Alex's next turn. Ben was content to plink his opponent down to six with his Nexus and played an Arcbound Slith. Alex looked more confident sitting behind a Tel-Jilad Archers but Ben was still holding the second Overload. He tapped the Archer and attacked the Bay Area player down to five.

Alex equipped his Devourer and sent it into the red zone. Ben activated his Nexus and blocked with his Arcbound Slith. He put the counter on the flying Mishra and Alex looked angry with himself for not seeing that coming.

Alex had to chump block the Behemoth next turn with his Wolf and fell to three from the Nexus. Alex attacked Ben down to five with his Devourer and passed the turn with one card in hand and plenty of untapped mana. Ben activated his Nexus and looked at his opponent for a tell that would warn him of Tangle Spider. Finally Ben attacked. Before blockers Ben used Echoing truth to return the Needlebug to Alex's hand. He seemed surprised that Alex discarded it and a Clockwork Vorrac to untap the Archers.

Alex agreed that it was bad on his part as well. "I could have untapped the Archers next turn-I just drew a land though."

Both players tried to shake off their misplays and got the game underway. Ben's deck yielded a turn two Frogmite off of two artifact lands. Alex played a Sword of Light and Dark on his next turn and a Skeleton Shard the turn after that. He had only four swamps in play. Ben played a Spire Golem. 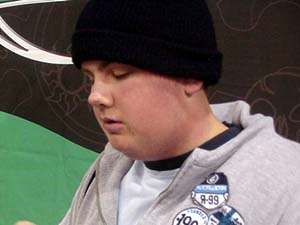 Alex was still stuck on lands but drew an Arcbound Hybrid that kept the Frogmite at bay. A Wizard Replica threatened to complicate things for the mana screwed Alepin. He tried to get Ben to sac it when he Consumed the Frogmite's Spirit for two. Ben used Echoing Truth to save it.

Alex needed green mana-he was sitting on a Viridian Shaman among his other green cards. He attempted to cast a Gilded Lotus but it was countered with Override. Alex offered his hand and scooped the match.

1 Sword of Light and Shadow
62 Cards