The other match - Fiore vs. Blech - might be more recognizable but these two deserve the same praise. They both swept the first day and are on the best possible path to the Top 8. The winner will be a step closer to the "ID Zone" but the loser will still be clearly in the hunt. 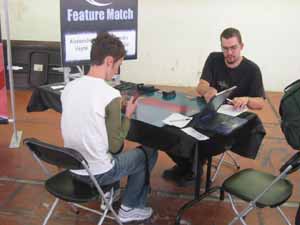 Vegna was wide awake from the start. First turn Prospector, followed by Sledder before Mueller could even lay out a Rift. When a Incinerator joined the table Andre paused to think. He finally decided he had enough time to play Astral Slide.

The Italian sent everyone in but could do little other than use Burrows to drop his opponent to eleven. He was clearly out of gas, just riding his three creatures. A cycled land shot the Incinerator away and Spark Spray got the lonely Sledder - the Prospector was Slided away - on the next combat.

The German played a morph and seemed in control, but Vegna had just reached six mana. Rorix came out to play. Thankfully for Mueller he had Eternal Dragon to cycle and hide the monster away for a while.

Again, Andre Mueller leaned back to puzzle the game out. He let Vegna have another turn. When the Rorix came, he unmorphed his Angel, dealt damage and then Slide it away. The Rift shot took the Rorix out. No big problem, Alessandro had another.

Still, Slide is one mighty important card. As long as Mueller could find enough cycling cards, the Rorix was out of the Red Zone and the Angel kept sneaking in. A few turns later Alessandro figured he couldn't win this one and might as well move along to the next one.

Down a game, Vegna had to mulligan. He still have first turn Prospector but Mueller had Spark Spray for it. The Italian followed it with a rather lonely Piledriver. He couldn't find any creature to help the Goblin out, but he did find Sulfuric Vortex.

Down came the enchantment. Mueller frowned and went on a cycling frenzy, killing the Piledriver with Incinerator. The Vortex was a very unforgiving clock and the Italian seemed hard pressed to find Goblins (he had six lands, so he was surely not holding Rorix). Across the table Andre Mueller was a flurry of movement. He cycled like a madman, eventually casting Incinerator to attack his opponent.

The Italian found a Stabilizer and played it, putting an end to any cycling ideas Mueller might have. Still, he couldn't stop the Incinerator for a few more turns. He tried Piledriver but Mueller had Shock ready.

Solar Blast brought the Italian to three, forcing him to Carbonize the Incinerator on the next swing. It was too little, too late. Andre Mueller showed him Spark Spray and with his own Vortex promising the final two points of damage on the next upkeep he knew the round was over.