Both players were joking about why they could possibly be in the feature match. Ken perhaps forgot his Top 8 appearance at Worlds in Sydney. He did not forget his opponent’s 6-1 draft performance at an earlier Worlds.

“I’m pretty impressed Ken not too many people remember that.”

“I’m one of the few players who has been playing that long.” Ken went on to complain about one of Jon’s picks in the draft. Jon was sitting to the left of Ken and took a Viridian Longbow over a Terror. Jon’s deck is black-red while Ken was blue white. He had multiple Den Guards and Skycubs that had tremendous synergy with the Longbow. “I’m going to burn you for that hate draft Becker! Besides you need Terror to play black. If you don’t have it it’s like bringing a knife to a gunfight.”

Jon shrugged and wanted to focus on a late gift Ken received during the draft. “I can’t believe you got a 7th pick Mask of Memory!”

“I know, Tony Tsai was like ‘I need the Myr’. I was like, ‘derf derf maybe I’ll get the Mask’—and I got it. I take that card over Spikeshot Goblin and I got it seventh.” 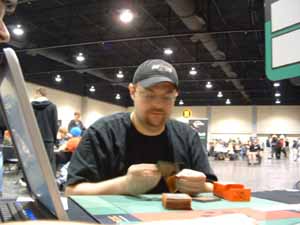 Jon opened with a Pyrite Spellbomb but that was all the action until Ken played a Skyhunter Cub. Jon smoked the cub with his Spellbomb and Ken shrugged, “Man down”

Ken played a Sky Patrol and Jon came back with Pewter Golem. Ken soared over the red zone for two and played a Quicksilver Elemental, which prompted Jon to comment, “Seems busty.”

Jon played a Scimitar and equipped his guy and got in for five. He followed with a Hematite Golem.

Ken played a Leonin Den Guard and his own Scimitar prompting Jon to frown, “That’s a darn shame.”

Ken equipped the Guard and sent in his Patrol for another two points in the air.

Jon equipped his Hematite Golem and sent both men into the red zone. Ken blocked with his Den Guard but Jon had the Shatter. He pumped the heck out his unblocked Golem and Ken fell to nine. Jon took five on the crack back. But he had no creatures to leave back to block. Instead he had Roar of the Kha. Jon had and Irradiate for the Elemental and was able to regenerate his Pewter Golem in combat. Ken fell to five from the Hematite.

Ken played Wizard Replica and left both men back. Ken’s guys chumped and Jon added a Nim Shrieker. Ken didn’t have anything in his deck that would hold off Jon’s next attack. “I didn’t draft a Wrath did I?”

Ken wasn’t happy about his deck. “I didn’t open Bonesplitter and everyone else did. I can’t beat Kibler and now I’m going to lose to you.”

Jon was skeptical, “I don’t know about that.”

Ken grinned, “Me neither. I have lost more than my share of game ones without it resulting in a match loss.”

Jon was regretting the Terror pick, “I really wish I had that Terror. It kills Kibler’s Glissa and Molder Slug—of course they hadn’t been opened yet.”

Ken agreed, “Terror is just ridiculous in this format!” 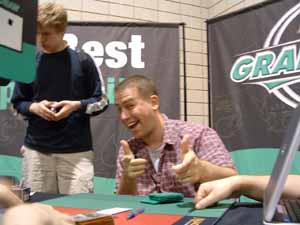 Jon was on the draw but had a Pyrite Spellbomb. Ken made a turn two Myr over a Den Guard. Jon followed with a Myr of his own.

Ken got in with his Myr and Jon chose not to trade. Ken followed with a Wizard replica. Jon had no turn three play and passed it back to Ken who made a turn four Quicksilver Elemental. “Already? Dear God”

Jon killed it with a combo of Pyrite Spellbomb and Irradiate. Ken played a Den Guard and flew over with his Replica. Jon was sitting on five lands and a Myr. Ken played his sixth land and a Leonin Skyhunter.

Jon played a Spellbomb and attempted to kill it but Ken had the Regress. His next draw yielded a Longbow that his Den Guard picked up and attacked for three. He replayed the Skyhunter. Jon played a Rustmouth Ogre and Ken kicked himself for not killing the Myr on his turn since he could not counter the spell now with his Wizard Replica. He shot Jon EOT.

Ken attacked in the air and started moving his Longbow around his men and shooting Jon. Jon scooped the next turn.

“I wish I knew how good the Sun Standard was I took Cub instead. I didn’t know.” Ken was regretting his pick. He didn’t have much experience with the card and he let it get to Kibler and his bombtastic deck instead.

Jon kept his openers but Ken shipped back a one-land hand with a Myr, some three and four drops and Mask of Memory. “Some people would dicker around with a hand like that but not me.”

Ken was faced with another one-land, Myr draw, “This one I’m afraid I’m going to have to keep.”

Ken did not draw a second land for many turns. His only land was an Ancient Den and Jon enchanted it with Relic Bane. Once Ken found some lands all it allowed him to do was play chump blockers every turn.