"You are 9-0 so far," asked Sam Stein as he and David Sharfman sat down in the Feature Match arena.

"Not for long," grinned Sam who was sitting pretty at 8-1 himself. Currently a resident of Las Vegas, Nevada, Sam is best known for his Top 8 finish at Pro Tour Valencia playing with Affinity. David Sharfman is best known – to observers of U.S. Nationals anyway – for not losing in Constructed at Nats. He has accumulated close to 20 Constructed wins at Nationals in the last three years and if there was any chance to stick him with a loss it would be in Limited. 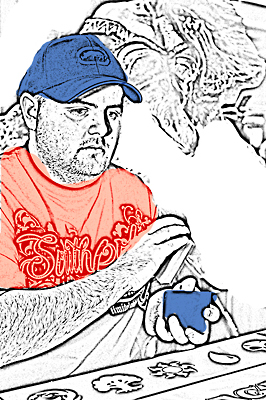 David went 7-0 at Nats two years ago only to finish 9th off of a 3-4 record in Limited. David had ground into Nationals the last three times and had little Limited prep leading up to each event. This year he was prequalified and came armed with extensive knowledge of the current Limited format.

Both players mulliganed to start off the match and neither of them came blazing out of the gates, which should give you an idea of how fast this format has gotten when Sharfman's turn three Ashenmoor Gouger does not strike me as a fast start. He followed up with Faerie Macabre while Sam was sitting on four lands, which meant either he kept an all-lander or an Aethertow was in Sharfman's future. After the Gouger went on top of the library David played Emberstrike Duo.

Sam started to commit cards to the board with a Silkbind Faerie but David killed with Soul Rend after replaying the Gouger. With the buffs to Duo and the ancillary damage from the Soul Rend Sam was at six after the David's attack step. He put up a token resistance with Farhaven Elf but David was not playing around and cleared the path with Cultbrand Cinder.

"All land?" asked David after the game. Sam shrugged. 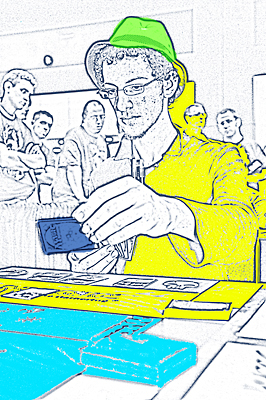 David Sharfman has a nice hatSam looked at a hand with almost all blue cards and three Forests but elected to keep and had to pass the first three turns without a play. David's draw was not nearly as punishing this game, starting out with Rustrazor Butcher and Gravelgill Duo. A fourth Forest from Sam let him deploy Wildslayer Elves. It traded with the Gravelgill after David played Power of Fire on his wither guy. Sam's Illuminated Folio would be turned on for several turns thanks to his grip full of blue cards but he would have to wait a turn to untap some mana. David added Sootwalkers to his side of the board.

Sam drew an extra card showing off Inkfathom Infiltrator and Augury Adept – he did not have a second blue for either of them – and drew a card. He played Noxious Hatchling.

David ran his guys in and shot the Hatchling down. He then put Sam on a clock with Siphon Life. Sam drew his second Island and was able to play Selkie Hedge-Mage and Infiltrator – bouncing the Rustrazor Butcher. David retraced the Siphon and Soul Rended the Infiltrator. He then got his beat on with Sootwalkers. Sam now had the mana to play play out his hand dropping Silkbind Faerie and Augery Adept.

David added Faerie Macabre and replayed Rustrazor Butcher. Sam attacked with his Silkbind and played Savage Conception. "Judge do you have beast tokens?"

The judge dropped one on the table but Sam looked at the lands in his hand and called the judge back: "I might need more."

David added Lingering Tormentor to his board but could not get in a good attack after Sam tapped the Macabre. Sam converted another land into a token and got in for one with his Silkbind. 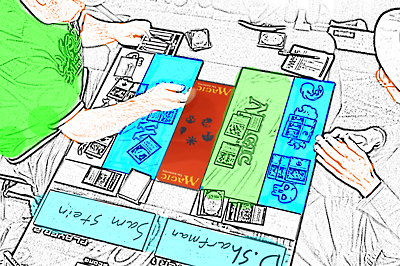 Stein and Sharfman battle for top dog
David was content to slowly drain Sam's life with his extra lands. Sam was gaining steam though and was able to attack with two tokens and the Faerie. David took six and let the Silkbind bounce off of his Faerie Macabre. Things became more problematic for Sam when David added Fang Skulkin to the mix. Faerie Macabre got in unmolested and Sam fell to three from another siphoning of his life. David was out of cards but every land was one step closer to the inevitable.

"How many cards do you have left in your library?"

David took 9 damage from a horde of Beast tokens and hoped for the best, playing Scuttlemutt and making another token. He was holding Howl of the Night Pack but had to play the artifact creature to block Lingering Tormentor. David attacked with everything and got through for one point of damage but with a land off the top that was all David needed.

David shuffled through his deck and revealed a pair of Puncture Blasts. "I had a couple of ways to deal three too."

David Irvine and Antonino DeRosa wandered by to cheer for the 9-0 Floridian but Ant rethought his words of encouragement.

"David! I was rooting for you this whole tournament until you showed up with that stupid hat."