Round One Feature Match: Oliver Oks vs Rob Nadebaum

When the two players sat down the first thing that they talked about was the draft, and they both felt that it didn’t go as well as they’d hoped. They put it down to a combination of poor packs and what they thought to be a few random picks here and there. Oks commented that he’d “Probably have a better chance of winning playing 39 Mountains plus the sideboard dragon roost”. “It could be worse”, replied Nadebaum “It could be my deck!” 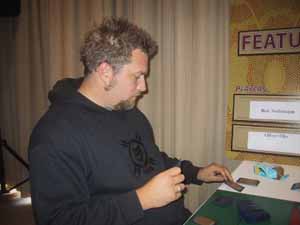 Oks won the coin toss and lead off with a first turn Wall of Hope which was met by a turn two Aphetto Alchemist from Nadebaum. Oks cycled a Disciple of Malice during the end step and then brought out and a morph creature. Nadebaum returned fire with a Mistform Dreamer and sent the turn back to Oks, who failed to find his second colour and simply played another morph creature. Slamming down a skill on his Dreamer, Nadebaum then turned it into a wizard, untapped it with the Alchemist, and killed the two morph creatures, one of which being a Dawning Purist. Nadebaum cycled a Lonely Sandbar at the end of Oks turn who had nothing to play, both trapped by his increasing lack of black mana and his inability to get through the 4 point machine gunner combo. Ndaebaum continued to cycle cards trading in a Slipstream Eel and sending in the Dreamer for two points of beats. Oks finally drew his second colour but was still unable to play any creatures. Nadebaum sent in the dreamer again for another 2 points of damage and then dropped a Mistform Wanderer, adding to his growing army of flying monsters. After taking a huge slap of damage during the attack phase Oks decided that it was best to scoop up his cards and head to game 2

Once again Oks decided to play first, and started off his summoning with a Disciple of Malice. He sent it into the redzone on turn 3 and brought down a morph creature to join his army. Nadebaum responded by cycling his Slipstream Eel and then summoned a morph of his own, sending the turn back. Oks plays a second morph and elects not to send his original into the red zone passing the turn back to Nadebaum who has no play, sending the turn straight back. In comes the turn old Oks morph and Nadebaum takes the damage, dropping him to 17 life, but still Nadebaum has no play despite having 5 mana. Once again it’s the lone morph that enters the red zone for Oks but this time Nadebaum blocks it. Damage goes on the stack and Oks flips over his Daru Healer that has been left behind. Nadebaum flips up a Master of the Mist and elects to turn the Cleric facedown again. Oks casts a Gustcloak Sentinel and sends the turn back across with Nadebaums Erratic Explosion flipping over a Mistform Dreamer, taking out the now face down Daru Healer, and the turn goes back. Gustcloak Sentinel comes crashing into the red zone all on its lonesome and Nadebaum takes the damage. Once again he casts Erratic Explosion, this time on the last morph and it turns out to be a Skinthinner, which flips over in response, killing the Master of the Veil. After the stack returns to the explosion it flips over an Alchemist and it takes out the thinner. Oks tries to summon a Morph creature but it is met with a Discombobulate and once again the Sentinel comes crashing in. Nadebaum cycles off a Forgotten Cave, and drops down a Slipstream Eel creating a large wall for him to defend himself. The Sentinal comes in and is met by the eel, but its only a bluff forcing it to be removed from combat.

Oks summons a Battlefield Medic and sends the turn back again. Nadebaum summons a Crookclaw Elder and it’s matched by a Scion of Darkness from Oks. Nadebaum cycles backslide, looking for some way to deal with the growing Oks force. Oks comes charging in with the Scion and the Sentinel and Nadebaum chooses to block the Scion with his wall of eel, allowing the Sentinel to come through. After combat Nadebaum tries to finish it off with a Pinpoint Avalanche which is met by Akroma’s Blessing, giving it Protection from red and forcing them into a deciding game 3

Oks is again the first player to play a spell, dropping down a Glory Seeker and Nadebaum matches it with a turn 3 morph. Oks comes charging in on his next turn, dealing two damage with Nadebaum refusing to exchange. Oks plays down a Smokespew Invoker and sends the turn back across, but Nadebaum has no play ending his turn. Oks attempts to cast Pacifism on the morph but it gets Complicated by Nadebaum. This does little to deter Oks who sends his creatures pounding into the red zone anyway, with the moprh blocking the Smokespew Invoker. Erratic Explosion reveals 4 lands before turning over a Lavamancers Skill to knock out the Glory Seeker. Nadebaum then drops down an Aphetto Alchemist and ends the turn.

Oks plays out a Dive Bomber but an Erratic Explosion reveals a Slipstream Eel, killing the Bomber and the Alchemist comes into the red zone, with a Lightning Rift joining the table on Nadebaums side. Oks casts down a morph, and when Nadebaum drops down a Sage Aven things are starting to look a little grim if one of the cards in there has cycle it could prove a real problem for Oks 2 toughness army. The morph charges in for two with Nadebaum electing not to block, and Oks plays out another morph creature. Nadebaum drops a land and plays out a Crowclaw Elder, leaving him with no cards in hand, but an impressive looking board.

Oks sends his two morphs into the red zone and Nadebaum elects not to block, taking four damage and dropping down to 10 life. Skinthinner flips over taking out the Crowclaw Elder but in response Nadebaum taps it and a bird to draw a card. Nadebaum simply summons a Mistform Stalker in his turn and passes it back across. Oks drops down a Disciple of Malice and Nadebaum brings down a Goblin Grappler and then sends his Sage Aven over for a measly one damage. Gustcloak Sentinel once again makes an appearance for Oks and Nadebaum responds by sending his Aven in for another single point of damage, passing the turn back again.

In comes the Sentinel dealing 3 damage and Nadebaum sends in the little aven and summons a Mistform Dreamer. Back into the red zone comes the gustcloak, and it is chumped off by the grappler. A morph from Oks gets Discombobulated, but a Profane Prayers gets through killing off the Mistform Stalker. Nadebaum sends in his Aven and Dreamer and after combat Pinpoint Avalanche tries to kill the Sentinel but a Daru Mender is unmorphed keeping it alive. Oks sends in the Sentinal and the Disciple of Malice and summons a Scion of Darkness. Nadebaum plays down a Warped Researcher and sends the turn back across, preparing to dig in with the life totals at 14-4 in oks favour. When Oks declaires his attack time is called and Nadebaum thinks for a few seconds before scooping up his cards