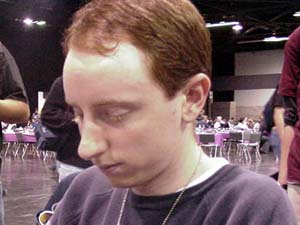 Pustilnik has been traveling a lot of late. He was just at Grand Prix: Munich where he just missed making Day Two in a grueling round nine feature match. Mike is qualified for Pro Tour Amsterdam but will fall off the train before it pulls into the Kobe station unless he picks up an invitation here or five Pro Tour points between now and then. Mike was playing with a variant of the deck he last used to win a Grand Prix-The Rock.

Eugene is debatably the most highly regarded member of CMU/TOGIT-easily a two way debate this weekend between him an Osyp with Mike Turian and Gary Wise absent. He has done well at his last few Pro Tours and the man known as Eubroken was playing with a deck that defeated him the last time he made the Top 8 of a Pro Tour-George W. Bosh.

Harvey did not keep his openers but his next six had Tomb and Chalice for one so he kept it. Mike kept his and they were under way. Eugene opened with his Chalice and when he tore a sheet of paper to make a counter, Mike chided him and handed him a die, "If there is one thing I can't stand it is little pieces of paper."

Mike had no turn one play-he was holding a Bird of Paradise but could not cast it successfully. Eugene drew a Port and played a Monolith. Mike's next turn was also devoid of action as he played a Treetop Village. Eugene drew and played a Metalworker but he looked irked by Mike's turn three Pernicious Deed.

He activated his Metalworker and showed an Incubator and Monolith to pay for his Incubator along with his Tomb. Mike dug for a card on his turn with Wall of Blossoms but had no other play and a grip full of lands. Eugene thought about Porting Mike on his next upkeep but ultimately had no effects-he would have taken two from his Tomb to do it.

Both players sent the turn back and forth. Eugene used his Metalworker to reveal his Monolith and Ported Mike's Treetop Village during his upkeep. He burnt for one even though he could have tapped his Monolith to go up to four mana and wash his extra mana through the Monolith. He shook his head moments later when he realized his mistake.

On his next turn, Eugene drew a Shivan Reef and made six mana, showing his Monolith and tapping the one in play. He Tinkered the Monolith away for a Mindslaver and activated it. Mike had no responses and Eugene passed priority. Mike activated his Treetop and Deeded for three at the end of the turn.

Mike/Eugene drew a Duress and they had a hand of double Cabal Therapy, Duress, Bird, Baloth, Swamp, and Llanowar Wastes. Eugene/Mike played the Baloth and the Bird and cast Cabal Therapy naming Cabal Therapy and flashed it back naming Duress and then flashed back another naming Black Lotus. Mike had seven lands and no other board and only Swamp in hand-the Wastes was played and tapped for black to damage Mike.

On Eugene's own turn he drew another Shivan Reef and was able to play his Monolith with six mana open in order to activate his Incubator. Mike looked sternly at his deck and named the only out he had remaining, "Pernicious Deed off the top."

It was not to be and he then sent the turn back to Harvey, "Show me nineteen artifacts and I will scoop." Eugene showed him enough to go to Game 2.

"I will play, so I can cast at least one one-mana spell." Mike led off with Duress and took a Chalice of the Void over Tinker or Mystical Tutor. Mike played a turn two Wall of Blossoms while Eugene played Reef and Port. Mike played a Bird and passed the turn to Eugene. The CMU'er tapped out for a Metalworker and a Welding Jar. Mike Duressed and saw Tinker and Mindslaver. He took the Tinker and Diabolic Edicted the worker away. Eugene played another and Mike forced him to sacrifice his Welding Jar to save it with an Uktabi Orangutan. .

Mike dug for answers with Wall of Blossoms and Eugene did the same on his own turn with Stroke of Genius revealing two artifacts to do so. He played an Ancient Tomb and sent the turn back to Mike who cast Damping Matrix. Eugene played a second Metalworker.

Mike attacked for five with his Monkey and a Treetop Village and Eugene fell to eleven. Mike activated Both Villages his next turn and Eugene tapped one with a Port. Mike attacked with the other and his monkey. The two Metalworkers jumped in the monkey's path and took revenge for fallen comrades. Eugene played a Welding Jar and Tinkered it way for a Platinum Angel.

Mike Therapied naming Mindslaver and then flashed it back at the cost of his Wall naming Welding Jar and left Eugene holding only a Seat of the Synod. Mike then played a Ravenous Baloth. Eugene attacked for four and fell to zero on Mike's counter attack. Mike played a Pernicious Deed but only had six mana to activate it-he would be able to win when he drew his next land.

Eugene went to negative one and cast Stroke of Genius for five cards. He attacked with his Angel and cast Tinker-sacrificing a Seat-for Tangle Wire. Mike tapped four permanents but had enough mana left to play a Wall of Blossoms, which drew him another card. It was a Forest. Eugene scooped since he would die on Mike's upkeep when he could use the Deed to kill the Angel.

There were eight minutes left. Eugene was angry that he drew the Stroke. "The Stroke made me think I could win. If I hadn't drawn the Stroke I would have just conceded. Eugene led off with a Key and followed it with a turn two Grim Monolith. He parlayed that into a Gilded Lotus, which powered out a Chalice for one. Mike Vampiric Tutored for Naturalize and took out the Lotus on his next turn.

Eugene Tinkered away the Chalice and replaced it with Bosh, Iron Golem. Mike had a Viridian Shaman and killed it before it could do any harm. Eugene passed his next turn without a third land. Mike played land number four and a Deed. Eugene found his third land, which was a Port. Mike Deeded for two and Eugene Stroked for five in response. Mike made another Deed and attacked for two.

Eugene played a Monolith and a Dynamo and passed the turn with Upheaval and more artifacts in hand but Mike had the Duress for the Upheaval. Eugene kept Mike from casting the Baloth he was holding with a Rishadon Port tapping down his second green source. When Mike cast an Uktabi on the Dynamo, Eugene drew eight cards. Time was called and Mike passed the turn back to Eugene who was at eight while Mike was at a hearty eighteen.

Turn one of five

Eugene forced Mike to blow his Deed by playing a Key and then using it to cast Monolith. He then played another Key and when he went to untap his Monolith with two in his pool, Mike activated the Deed for two. Eugene used the floating mana and his lands to play a Metalworker and a Tangle Wire. 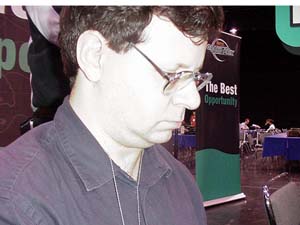 Mike tapped his creatures and two lands. He played a Treetop and Naturalized the Metalworker. He could have taken a gamble and not tapped his guys and tried for the win but Mike did not want to allow Eugene to untap with an active Metalworker.

Eugene drew his card and offered the draw to save everyone time. Mike accepted and we had out second drawn feature match of the day and the fourth to go to time.

So much for a fast format!