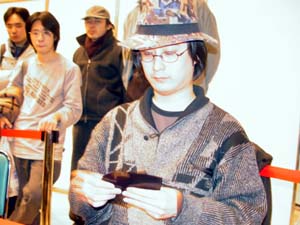 the early days of competitive Magic, Satoshi Nakamura was the most recognizable player to come from Japan. Between his notorious wacky hats and even more off-the-wall deck creations, Nakamura has always drawn attention, especially from foreigners. Today Nakamura is living up to his reputation, wearing a blue, brown, gray, orange and black hat, and playing a Spellweaver Helix deck that is currently 6-0. His opponent, the "Silver Collector" Osamu Fujita, just added another second place finish to his resume last week at Pro Tour Amsterdam, and is currently 6-0 as well with Goblins.

Nakamura mulliganed his opening hand. Fujita played Goblin Prospector and Goblin Piledriver, while Nakamura used Accumulated Knowledge and Deep Analysis to draw some cards. Fujita was lacking a third land, so he sacrificed a Prospector to summon Goblin Warchief and sent it into the Red Zone along with the Piledriver. Nakamura flashed back the Analysis, and now had six mana to Fujita's two thanks to a pair of Chrome Moxen. He summoned Wall of Blossoms, and cast Quiet Speculation to get two Cabal Therapy and Crush of Wurms. The Wall blocked the Warchief on Fujita's attack, and Nakamura went down to eight. Gempalm Incinerator finished off the Wall, which at set back Nakamura's potential plan of playing a Helix and flashing back the Therapy to get some Wurms. Fujita increased the pressure with Mogg Fanatic, putting lethal damage on the board. Nakamura cast Intuition to get the other three Accumulated Knowledge, and cast one to draw four cards. With only two mana left, he summoned Wild Mongrel, hoping it would help him survive until the next turn. It wasn't enough, as it blocked the Piledriver, and Blood Frenzy on Mogg Fanatic forced through the damage necessary to take the first game. Fujita- 1 Nakamura- 0 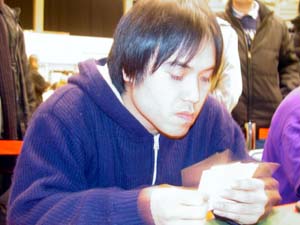 Nakamura opened with Cabal Therapy naming Goblin Piledriver and it didn't hit, but he did get to see a weak opening hand of Prospector, Sparksmith and five lands. The Prospector was matched by Wild Mongrel, and Psychatog came out to make things even worse for Fujita. A Piledriver provided a little more offense, and the three damage shot to Wild Mongrel was enough to convince Nakamura to let it die. Just when Fujita seemed that he was starting to get the board under his control, Nakamura played . Fujita untapped, played Mogg Fanatic, and shot the Psychatog for four. Nakamura only had two cards in hand and two cards in the graveyard, and decided to pitch his hand and half his graveyard to keep it alive. Regardless, Fujita used Gempalm Incinerator to clear it out of the way, and attacked to bring Nakamura to ten. Now that he had a hand and Nakamura didn't, the Deed seemed a little less threatening. It cleared the board on Fujita's next turn, but he came right back with Siege-Gang Commander. Nakamura had a great answer in a second Deed, killing the Goblin tokens before they could do any damage, but the Commander was still around and got through for two more damage. Goblin Matron searched up a Piledriver, and there was enough mana left over to play it. Nakamura drew and looked puzzled as if he was trying to figure out if he had any outs in this situation, trying to scan his brain for which card to hope for. It was just a land. Nakamura- "Remember when I said you need timing and luck to win a Pro Tour? He (Fujita) has it." Fujita- 2 Nakamura- 0