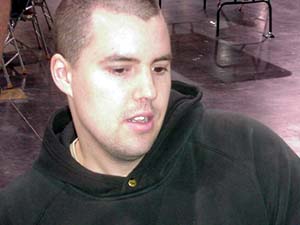 Heiss and his teammate Jon Sonne were both sitting on a single loss. Another loss would drop the recipient perilously close to elimination. Nate was not the picture of optimism as he asked, "Do you want help with Feature matches tomorrow?"

Josh Ravitz came over to watch the match and asked Nate about his deck. "Its okay…it has a lot of colors."

Nate won the toss and announced, "I guess I am going to draw."

Josh shook his head in disgust at the notion and cheered Sonne on, "Don't lose to Nate Heiss again!" Nate beat Jon on Day One of Grand Prix Kansas City en route to his finals appearance at that event.

Jon mulliganed but threatened to recoup the card disadvantage with Liar's Pendulum. He followed up with Copper Myr. Nate also had the Copper Myr in play on his turn two.

Jon activated his Pendulum and named Island. Nate guessed yes and Jon showed him that he did not have one. "You lied to me. Before the match he said he would tell the truth."

Nate played a Hematite Golem despite the knowledge that Jon was holding Domineer. Jon activated his Pendulum and named Island and Nate guessed he did not draw it. Jon did have it and drew another card.

Nate played a Lightning Greaves and attempted to equip the Golem but Jon returned it to his hand with an Aether Spellbomb. Jon activated his Pendulum and named Island again. Nate correctly guessed that he was lying. Jon Dismantled the Lightning Greaves and passed the turn back to Nate who cast Thirst for Knowledge on his own turn.

Jon removed the Pewter Golem that Nate discarded with a Mirror Golem. Josh Ravitz was watching the match and laughed that Jon was trying to disrupt Nate's reanimation strategy. He was kidding but Nate rolled his eyes and played a Woebearer on his next turn. "Reanimation is a real strategy." He was also holding Betrayal of the Flesh.

Jon attacked for three and played a Vulshok Battelgear. He then Domineered the Copper Myr. Nate got in for two with the Woebearer, Electrostaic Bolted the Golem, and played a Fireshrieker despite being stuck on four mana.

Jon played a Myr Enforcer and equipped his Myr with the Battlegear. "I'm going to need more Electrostaic Bolts."

Nate fell to three on the next attack from Jon's team and Essence Drain finished him off, "Put me out of my misery."

"Who gets me for two cards with the Pendulum? I am so good with that card but Jon is so deliberate and methodical I can't tell anything."

"So you are going to go second again?"

Jon opened with Aether Spellbomb and followed with Copper Myr. Nate played a Lightning Greaves. Jon stumbled on his land drops and cycled his Spellbomb but did not find land number three. Nate played a Spikeshot Goblin and attacked for one when he slapped the Greaves on it.

Jon continued to miss lands and tapped out to play a Battlegear. Nate shot the Myr on his next turn. He played a Pewter Golem and when he attempted to move the equipment, Jon killed the artifact with Echoing Decay.

Jon found his third land and played a Neurok Spy. Nate returned the Battlegear to the top of Jon's library with a Looming Hoverguard. "I have some good cards."

Josh Ravitz: "They're not helping you any."

"Not helping me any he says as I play my Fireshrieker."

Jon replayed the equipment and attacked for two. He got in for five on the next turn but never found his fourth mana. Nate Terrored the Spy and Jon conceded.

Nate laughed, "You think my four-color deck can't win on the play?" Nate played a turn two Greaves and a third turn Elf replica that attacked past Jon's Copper Myr. "I am too quick for you!"

Jon played a Silver Myr and passed the turn. Nate attacked with his Elf and a hasty Hematite Golem but Jon was able to kill the Replica with Echoing Decay and only took one. Jon played a Myr Enforcer and attacked for one with his leftover mana Myr.

Nate played a Vedalken Engineer and gave it haste to play out a Darksteel Ingot before passing the equipment back to the Golem. Jon played his Battlegear and made a 4/4 Myr and attacked for eight. "This seems very familiar."

Nate was not concerned though and promised, "This is going to be a very good turn." He killed the Battlegear with a Rustpore Ram and Bolted the Myr Enforcer. He had enough mana left over to pump his Golem.

Jon killed the Ram with an entwined Barbed Lightning and attacked for two with his Myr. Nate fell to six. Jon fell to seven on the counter attack but Nate had to tap out to do it. Jon thought over his next turn and gave Nate hope, "This means I am not dead." All Jon did was Dismantle the Lightning Greaves.

Nate sent the Golem into battle to eat a Myr on the next turn. Nate equipped his Engineer with a Leonin Bola. Nate had no response and allowed the Myr to attack for one. Nate fell to five. Jon Domineered the Hematite Golem, "I was thinking about that card." 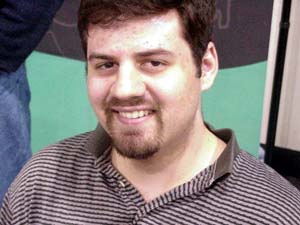 Nate dug for cards with Thirst for Knowledge and discarded a Stinger. He Arrested the stolen Golem and this time when Jon announced attackers he tapped the Silver Myr. Jon played his own Hematite Golem during the second main phase and Nate put it on top of the library with a Looming Hoverguard.

Jon replayed the Golem with one unknown card left in hand. Nate used his Engineer in order to have enough mana to play and equip his Looming Hoverguard with Fireshrieker. He had enough mana left over to finish him off with Barbed Lightning.