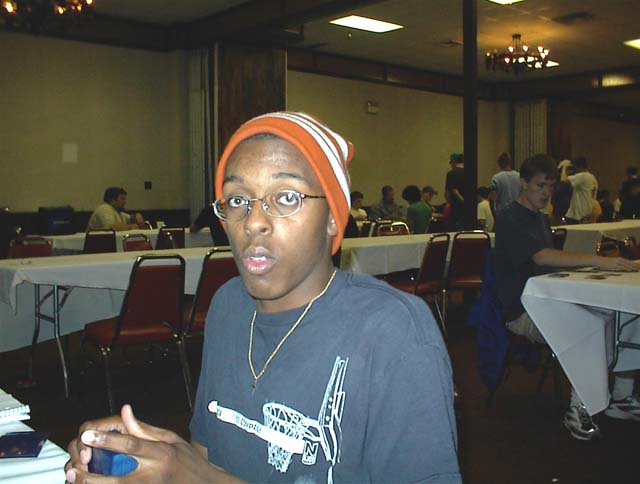 Sixteen year old Tennessee native Peter Maginnis is playing zombies, yep the same exact build that Brian Kibler used to make top eight at the United States Nationals. He had made it to the seventh round needing a win to possibly secure a slot in the top eight, but as his record was 4-1-1, even the win may not have got him there. Gary Ritchie is still playing Astral Slide and also needs to get the win to make the final cut. He lost the die roll, and did not feel hopeful in his chances of winning. He figured with the amount of disruption and the powerful Rotlung Reanimators the game would be hard fought.

Both players kept their opening hands, and young Maginnis played Duress He wisely made Gary discard the lone Wrath of God in his hand. Ritchie had a Lightning Rift, and followed that up with an Astral Slide. He threatened to take control of the game before it really started. Rotlung Reanimator showed up to support Peter, and when it got through for two, the turn was passed back to Gary. Renewed Faith acted as a cantrip fog for Gary during Peter‘s next attack step, and the Rift killed off the Rotlung. Gary played the Nantuko Monastery that was hanging out in his hand, and when the zombie came in from Maginnis, he attempted to block the token creature. Smother destroyed the man land before blocks, and Gary lost another two points of life. Gary played another Lightning Rift while all Peter could do was recur his Reanimator via Unholy Grotto. Exalted Angel came down, and Maginnis was upset over the lack of removal he had for the spirit linked creature. Platinum hits rained down from Gary’s hand, Monastery followed the Angel, and when Peter cast a Withered Wretch he could at the very least keep the Monastery from going large. Stronghold Assassin joined the team after the Wretch had his fill of graveyard, and looked to be a danger to the Angel filled board that Gary controlled.

Of course, he did not run out of cycling cards. A Decree of Justice killed the Assassin and the Wretch. Peter took his next turn, drew a Mesmeric Fiend and started to sideboard.

“I HEART this deck” exclaimed Peter as he side boarded after his drubbing. “I know it is very good against UG madness.” Of course Peter never played in Kentucky before, and all these players know is RG. Somehow, he is at least in contention for top eight still having only played two or three or four R/g Decks. He had no idea how many he really played.

“Oh man! If you had that one card, and you know what it was you sided it in. I’m gonna lose!” Peter just said.

Peter made some more adjustments to his sideboard before presenting.

Peter decided to start off the game two excitement, and after thinking about his opening seven he lets out a sigh, and kept. Gary kept his as well. 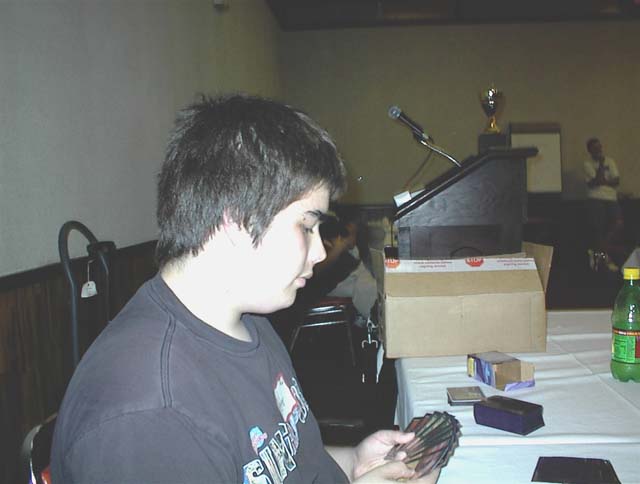 Duress from Peter takes away a Lightning Rift, and a second turn Nantuko Shade threatened to take large meaty chunks out of Gary’s life total. Compost hit play from Ritchie, and followed it up with the popular Astral Slide. Shade attacked for six, and Ritchie politely cycled a Slice and Dice. Graveborn Muse was Peter’s next play, and Gary had nothing besides the Astral Slide and Compost in play. A second Duress took the Wrath of God out of Gary’s hand, and was followed by a Rotlung Reanimator. Gary was hit for five which took him to a low life of nine. The every important Graveborn Muse would end up winning this game for one of the players. Withered Wretch and a second Reanimator hit the field. Gary was only able to answer back with a second Astral Slide. A Third Duress showed Peter just how hard it was going to be to win, and when he plucked the Slice and Dice, he knew he still had to deal with two Wrath of God and another Slice and Dice. Graveborn Muse took Peter to seven as he drew five new cards. Cabal Therapy named Renewed Faith, missed, and Peter sent his team in. The lone remaining Reanimator hit for two, and a Corrupt for seven brought game three.

Gary looked at his seven in the rubber match, kept his hand, and peter agreed. Lands came down from both sides, but Peter was the first to strike with a Nantuko Shade. Gary cast an Astral Slide and passed the turn back to Peter who attacked and cast a Rotlung Reanimator. Gary played a Teroh’s Faithful, which put him up to twenty two. Peter swung in with his team, hitting home with the Rotlung to knock Ritchie down to twenty. Peter cast Braids after this, and looked to be firmly in control. Gary added a Lightning Rift to his side of the board. Edict knocked out the Faithful, and Gary was able to kill off the Rotlung with his rift. Cycled Renewed Faith killed the braids, and slide out the Token that was made by the Rotlung. Graveborn Muse came down after a delta was sacrificed, and somehow, someway, Gary managed to take control of the game after this turn. His Monastery became active, and started to beat Peter down. The Muse needed to draw some answers, but only gave Peter land. He was forced to return the Rotlung to the top of his deck via Grotto before his draw step. Nothing was added to the board, and Gary just played a second Slide. 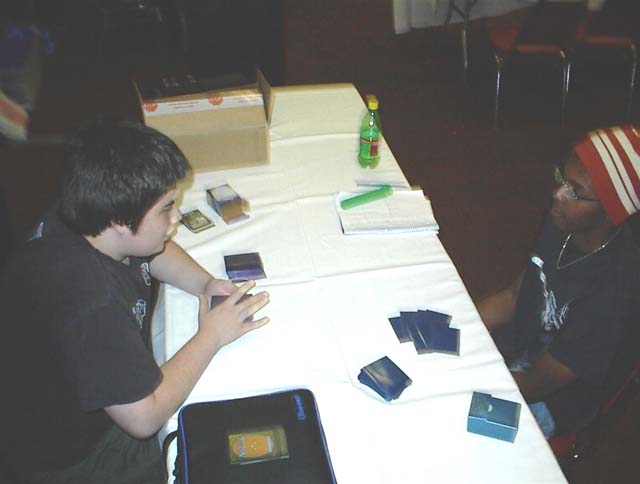 Time was called, Slice and Dice was cycled, and slide took out the muse, while Rift killed the Rotlung. Peter was at five life. He had three zombies in play. Peter would have died from his Muse had Gary drawn a cycler for his Rift. However, he missed, and played Wrath of God. This move kept Peter from getting extra draw steps to draw the Corrupt.

No corrupt was drawn, and Peter just played a Braids. He attacked with the token, Gary made the monastery and before blockers it was smothered. Duress took a second rift, and it was now up to Gary to draw good cards. He did, after drawing another Monastery, the activation was enough to win Gary the match in turn four of the extra turns.