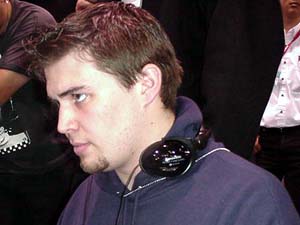 Brian Kibler has sported the YMG T-shirt and as he sat down for the match he would not address rumors that he was joining a new team with DeRosa and Gabe Walls. He did dispel the notion that Gabe and Antonino were playing the same deck. "Antonino was playing that deck but then realized last night it was awful and decided to play MY deck." (Which doesn't exactly dispel the team rumors with any authority since DeRosa is with CMU/TOGIT.)

"I will say that Rob's deck was not exactly on my meta-game radar." Kibler laughed and turned to the table judge and asked, "Soltari Priest is creature type cleric?"

Rob mulliganed but kept a hand that led off with Ramosian Sergeant. Kibler sat up in his chair, "I know that guys creature type!"

Rob attacked for one and a turn later when Brian sac'd his Bloodstained Mire it was Stifled. Brian played a Swamp and a Chrome Mox-imprinting the useless Rack and Ruin and Vampiric Tutored during Rob's next EOT. He played an Engineered Plague and Rob asked if he could Stifle the Plague's ability. Brian didn't think so, "When I play it on Modo it doesn't go on the stack."

Rob chose to search for a Whhipcorder in response and handed priority back to Brian who offered, "I'll give you three guesses as to what I name."

He was wrong on all counts but when Kibler named Rebels it did not stop the YMG leader from playing a 0/2 Lin-Sivvi on the next turn. "When was the last time I played against Lin-Sivvi?"

Brian sent back the turn without playing a fourth land. Rob Brainstormed and then searched out another Whipcorder EOT. He untapped and attacked with his pair of 1/1's. Rob played an Absolute Law. Kibler did not care too much since he was planning on another Engineered Plague, "I'm not naming Beebles!"

Rob sighed and sac'd a pair of fetch lands and Brainstormed for answers with only a 0/1 Lin-Sivvi on his board. He didn't like what he saw and he activated the Legend to search for a Sergeant-to thin his deck and to shuffle. Ironically he drew another Sergeant.

He untapped and tried a Meddling Mage but Kibler had the Counterspell. Rob continued to thin his deck EOT-there were no Sergeants left to draw but plenty of land and he drew an Island. Rob began to work the Defiant Falcons out of his deck. Rob passed the turn back and Kibler cast Fact or Fiction EOT. He flipped over Chrome Mox, Counterspell, Daze, Swamp, and Fire/Ice. Brian took the pile with the first three cards.

Brian attempted an Isochron Scepter and it resolved but Rob Stifled the imprinting process. Brian had a Tog for his next turn and Rob seemed disheartened. He drew and played a Serenity but it was quickly Counterspelled.

The Tog got in for one on the next turn and Brian played another. Rob played a Meddling Mage and named Counterspell when it resolved. Kibler Brainstormed during his next main phase-perhaps signaling that he was going in for the kill. Rob had no blocks but Kibler did not pump and played out his third Tog. Rob drew a Mother of Runes and played it but it may have been too late. Kibler attacked with all of his Togs and the YMG frontman had no blocks. Kibler did his math and debated what to do.

Finally-after much math-remember Rob could 'prevent' a point with Stifle-he began to pump one of his Togs. When he started removing cards from his graveyard with no cards in hand Rob did Stifle the tenth pump and took twelve leaving Brian with nothing in hand and two cards in the yard. Rob was at two.

He sent the turn back with no action and Kibler did the same. On Rob's next turn he played a Soltari Priest. Rib actually got his beat on for one turn before Kibler sent all of his men into the red zone again with three cards in hand and two in the bin. Rob put a man in front of each and saved his Mage with the Mother when the Tog was pumped.

Rob drew and played the card he drew-Worship. "Yup!" came from Kibler and Rob was in the game again. Kibler FoF'd for an answer and took a pile with Cunning Wish. He sent Rob to one and passed the turn back. There were only twenty minutes left in the round.

Brian's life was ticking down and he fell to three when he Wished for a Diabolic Edict. Rob's deck was not done giving him early X-mas gifts and he drew a Mobilization. When he played it Kibler cast Edict in response. When Rob didn't sac the Meddling Mage on Counterspell, Kibler conceded.

Kibler led off with a turn one Isochron Scepter imprinting Fire/Ice. He also imprinted a Chrome Mox with Vampiric Tutor to do so. He was down a bunch of cards but if Rob didn't find an answer in short order Kibler would recoup that disadvantage quickly.

Brian tapped a Plains during Rob's upkeep and urged Rob to play faster. "I know you won Game 1 Rob but Game 1 was long and it was all you."

"I would have killed you faster if you had let me." 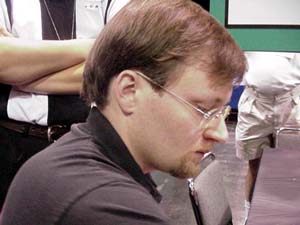 Kibler played another Scepter and imprinted this one with Brainstorm. Ron cast Enlightened Tutor during his upkeep and found a Serenity. He swung in for two with his Mage and played the Serenity, which sent Kibler into a Brainstorming session. He ultimately said "OK". He passed the turn and when the Serenity went off he Brainstormed again. In the end, Kibler lost both Scepters, the Plague and a Chrome Mox.

Rob followed with a Mother of Runes and a Soltari Priest. Kibler's next turn saw him play a Plague on wizards and then another on wizards to kill the Mage. When he attempted a Scepter it was Stifled. Brian burnt his Fire/Ice to draw a card and untapped to play a pair of Togs. With only one card in Kibler's hand Rob tutored for Mobilization. When he untapped he played a Damping Matrix-effectively shutting down the Togs.

Brian attacked for two but fell to three on the next counterattack.

Plague came down naming Clerics and killed the Mother and the Priest but Rob was able to make two soldiers a turn. With four soldiers in play, Rob played a Sergeant. Brian was skeptical that he could win and Iced a Plains. He didn't like what he drew and scooped on the next turn.