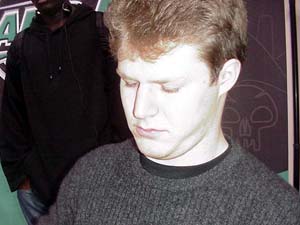 in America Toby Wachter is gnashing his teeth. One of the most painful events in his young life was covering an untimed match between these two competitors at a Masters event. Both players were with Psychatog and the match exceeded three hours. These were two veteran players with very deliberate play styles.

Dave nodded to his opponent before the match and offered a friendly, "Good luck."

Ben smiled as he always does when his opponents say that and gave what has become his classic response, "Thanks!"

Ben arched an eyebrow as he piled out Dave's cards and they did not work out to an even number, "Forty one cards?"

"The Dougherty strategy at its finest."

Ben kicked things off with an Arcbound Stinger and followed it with a Neurok Spy. Dave shook his head and Echoing Ruined the Stinger. Ben laughed, "You couldn't bring yourself to do that last turn?"

"You swallowed your pride, good man."

Ben attacked but had no fourth turn play. Dave played a Drill Skimmer and Ben read the card to make sure he understood how it worked. After an attack with the Spy he Detonated the Skimmer and Dave fell to eleven.

Dave played a Hematite Golem but he could not stop the Neurok Spy. Ben tapped out for an Arcbound Fiend, which prompted more reading. Dave had no attack and played a six mana Myr Enforcer. Ben played a Chromatic Sphere and cycled it for blue mana. He returned the Enforcer to the top of Dave's deck with a Looming Hoverguard and the YMGer fell to seven.

Dave got in for a point with the Hematite and played a Yotian Soldier. Ben dug three cards deep with his Thirst for Knowledge and pitched a pair of lands. He attacked with everyone and Dave could only cringe as he was forced to use Echoing Truth on the Looming Hoverguard. He took two and Ben played a Goblin Replica.

Now it was Dave's turn to draw three and he discarded a Clockwork Vorrac. He sent the turn back with his Yotian and Golem on sentry duty. Ben did not have a second blue source and could not recast the Hoverguard. He took Dave to three with the Spy and played an Ingot with the Looming Hoverguard ready to be deployed next turn.

Dave played a Megatog but Ben was able to polish off Dave with a Barbed Lightning.

Dave played an Arcbound Slith on the second turn but Ben had a Slobad, Goblin Tinkerer to trump that. Dave frowned and played a Goblin Replica. Ben promptly killed it with Echoing Ruin on the next turn. Dave seemed to agonize over his fourth turn and played Cobalt Golem over Arcbound Hybrid. Ben had his own Goblin Replica and continued to develop what was shaping p to be a tricky board.

Dave played the Arcbound Hybrid and attacked with it and Cobalt Golem. Ben chose not to block. Ben attacked with his Replica and Dave took two. He took another four when his Golem was Detonated. Dave sent both of his modules into the red zone and Ben puzzled over it but blocked the Slith nonetheless. Dave played a Granite Shard and polished off the tricky Legend.

Ben announced his intention to cast Somber Hoverguard and his Chromatic Sphere counted toward affinity. He then popped his Sphere to pay for the blue mana. He drew into an Island and played it. Ben had four mana open and fretted over what the correct play should be. Ultimately he passed the turn. 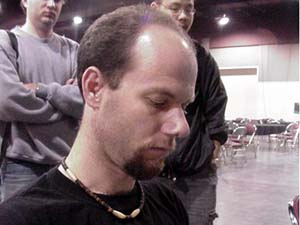 Dave attacked with his 3/3 Hybrid and Ben used his mana to trade it for his Replica. Dave cast Thirst for Knowledge in response but could do nothing about it. Ben untapped and plopped down a Platinum Angel after attacking for three with the Hoverguard.

Dave played a Beserker and attacked but Ben let it run past his Angel. Dave fell to two on the counter attack. When Ben played and Arcbound Fiend Dave had no choice but to Annul it. He drew nothing on the next draw and conceded.

6 Island 11 Mountain 1 Seat of the Synod

1 Megatog 1 Pulse of the Tangle