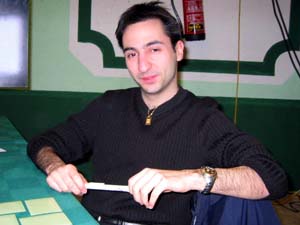 is another trial winner riding his deck to a perfect score so far. Across from him sits a player we have been calling a veteran for years. Levy is a perennial top finisher in European Grand Prix's and was one of the victims of the huge crowd in Grand Prix Munich (where despite over one thousand players only sixty-four reached the second day, meaning a 7-1-1 score was NOT enough for day two).

Irradiate took out the Ghost as soon as it reached for the Bonesplitter but Guterriez replaced it with Clockwork Worker. Across the table Raphael Levy was still locked at three lands but his Myrs were desperately trying to keep him in the game. He played Tel-Jilad Exile.

But at this point Demetrio Gutierrez had smelled the blood on the water was applied full pressure. Thoughtcast gave him Cobalt Golem and Levy dropped to seven. Things were looking very grim for the French. Terror sent the Swordsmith away and his deck finally yielded the fourth lands.

That gave him six mana. Six mana in Green equals Tangle Spider. Cobalt Golem bit the dust. Still, Gutierrez wasn't out of steam. He had another flyer in the shape of Clockwork Condor.

On his turn the French played Mirror Golem. But Gutierrez wasn't afraid of it. He had Blinding Beam in hand. He tapped the two blockers who could stop his flyers and finished the game.

Gutierrez played Vulshok Morningstar and Wizard Replica before Levy tapped mana. But when he did... well, when the French tapped mana it was brutal. He played Glissa Sunseeker on turn four and Tangle Golem on turn five. Since Gutierrez's deck seems to be mostly White and Blue things were looking grim for the Spanish.

The Golem started hording frequent flyer miles with his trips to the Red Zone while Glissa sat back and kept Demetrio in check. Demetrio opted to drop white flyers while sadly staring at his hand of Myr Enforcer and Icy Manipulator.

The Legend ate up the remaining artifact and out came Tangle Spider. Demetrio sighed. He knew he was in huge, huge trouble. The French sent his whole crew into the Red Zone and when Gutierrez tried to trade his Stand Together he turned the combat phase into a true bloodbath.

The Spanish wasn't even against the ropes... he wasn't reeling... he was just getting pounded. Altart's Light ate up Tangle Golem but Tel-Jilad Exile took up its place. A draw later Gutierrez conceded.

And that's why Glissa is a legend.

In the decisive game Demetrio did not start things the right way: he had to mulligan. All he could do early on was drop Bonesplitter. Levy dropped Copper Myr and Serum Tank. Finally Gutierrez played a creature Hoverguard Overseer.

Serum Tank gave Raphael Arcbound Stinger before Gutierrez sent it packing with Altar's Light. Still, that wasn't the real problem. The problem was Levy's next play: Glissa Sunseeker. Again Gutierrez seemed in trouble. Although his only artifact in play was Bonesplitter he would be unable to get any mileage of any other artifact he might draw.

The only plan Demetrio could come up with was to swarm Levy. He played Cobalt Golem and Arcbound Stinger. It wasn't a totally bad plan, but Raphael wasn't about to slow down. Glissa took out the Golem and with the mana he used Essence Drain to sent the Overseer away.

But the Spanish wasn't out of it yet. He tapped six mana and showed his own power rare: Prismatic Angel. Glissa ate up the last artifact and Chittering Rats took the last card out of Gutierrez's hand. 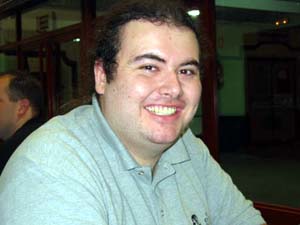 The Spanish sent his Angel in and used Blinding Beam to lock down Levy's whole team. Now that the Angel was tapped Levy was free to use Irradiate on it. The game was over.