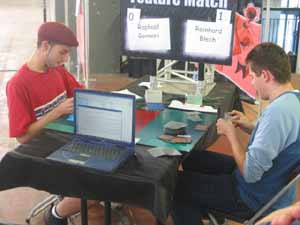 Raphael you might know not only as the stylish Swiss who made a Pro Tour Top 8 a few stops back, but most of you never heard of Reinhard Blech. His name is known mostly in the Type 1 community as one of the best players and deckbuilders in the business. In the "mainstream" his claim to fame is being apart of the German National team this year (not an easy task).

While the Swiss agonized over his bad luck, Blech set about cycling using Eternal Dragon. Finally Gennari moved. And when did. Blech sat up straight in his chair: Exalted Angel. He tried to stop it with Eternal Dragon and Gennari smiled.

Raphael: "Are you ready for the big one?"

He dropped the three Scales on the Angel. The German took in stride, untapped and dropped Astral Slide along with a morph. This allowed him to block the Angel and save the Dragon. Shaking his head Raphael Gennari played the Vengeance.

Left alone the Dragon started fighting back. Blech returned a second Dragon to his hand and played a morph. Raphael cycled and dropped his own Dragon, instantly bigger from the three Dragon Scales. Again, the German seemed unimpressed.

He had the same answer: Astral Slide. Gennari sent his Dragon in to drop Blech to eight and played his last two cards, Stoic Champion and Dawn Elemental. The Slide took the Elemental and the Dragon away on the end step.

The German flipped Exalted Angel and sent it in. Raphael attacked back with his Extremely Scaled Dragon and again Blech's Slide saved the chumper. On the next turn the Slide constant meddling paid off: Gennari had to pick up his cards.

Gennari kicked out with second turn, and third turn, Silver Knight. Blech played a morph and took another hit from the cavalry (one of them with Scales on). A third Knight helped bring Blech to seven on the next swing.

The German cycled away Vengeance and on his turn played a second Plains. Still, the Swiss sent everyone in. Wing Shards cost him the morphed Daru Sanctifier but his opponent slipped to two. That was more than enough for Blech. He reached his sixth turn, played his sixth land and unleashed Akroma's Vengeance.

Raphael played a cycling land and passed the turn, prompting Blech to murmur "Akroma...". Sure enough Raphael Gennari had the big legend, and Reinhard's last gasp cycling failed to yield any help (Shards would've been nice at this point).

Blech liked his hand and even offered to help Gennari decide if he should keep his hand (several lands, Vengeance and Scales) after the Swiss asked me for my opinion. Turn two Stabilizer put an end to Blech's cycling plans but he had a morph (Exalted Angel). Turn after turn he kept it back, never entering the Red Zone, perhaps afraid of Wing Shards.

Through this all Raphael played land after land. Until he reached seven mana. Then he dropped Eternal Dragon. Scales made it bigger but Reinhard had the Wing Shards for it. The next attacker was Akroma, and again Blech had Shards.

Raphael: "So lucky! So lucky!"

Since his opponent was tapped out Reinhard's Angel snuck in for a hit before being joined by Eternal Dragon.

Reinhard: "I would play Vengeance."

The Swiss seemed to think that was a good advice, and he followed it. Vengeance wiped the table and a Silver Knight came into play. Despite his claims, Blech was not impressed. He took the time to fetch and cycle his Eternal Dragon while Gennari's Knight owned the table.

Raphael fetched his Eternal Dragon as well, but decided to play Stabilizer instead. On the next turn he played the Dragon but lost the Scales to Reinhard's Wipe Clean. Eager to go back to his cycling days Blech Vengeance away the Knight and Stabilizer and traded his Dragon in for a Plains.

The Swiss, however, was in no mood for building up mana. He replayed his Dragon and added a Silver Knight.
Blech answered with a cycled Decree of Justice that spawned seven Soldiers. He sent them in and played Astral Slide, hoping to again trick his way to victory.

Gennari unmorphed Daru Sanctifier to eat up the Slide and played his FOURTH Knight. They each had a Dragon, Blech had five Soldiers while Gennari had two Knights and Sanctifier. The Dragons traded and Gennari cycled a Decree for seven Soldiers. Blech's Starstorm swiped every Soldier away.

The German played an Angel to stop the Knights and Raphael doubled the ante: two Angels. Again, unimpressed the German showed Akroma's Vengeance before replaying two Dragons. Gennari replayed one Dragon and one Dawn Elemental.

On and on the game dragged along with no apparent winner. Reinhard tried Akroma, but the Elemental meant the Legend wasn't doing much damage. The German sent everyone in and dropped Gennari to two damage. On the next turn he fell to one and spanked his deck.

He didn't draw Akroma's Vengeance but he played Dragon and a morph. Reinhard reconsidered the table and sent everyone in. Raphael Gennari extended his hand.