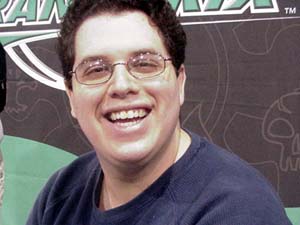 Cahir is a young student from the Settle area who used to tear up the JSS circuit. He was also an intern in the Renton offices at Wizards a few summers ago. While he has qualified for a fair number of Pro Tours he has only recently started attending them. When asked if he was attending PT Kobe the young Washingtonian smiled, "I sold out in the finals of a PTQ."

Mike Turian was homing in on yet another Top 8 appearance as his farewell tour rolled into Oakland. He was undefeated yesterday and his draw with Ben Rubin-of the unintentional variety-left only him and Rubin as the remaining undefeated players with a pair of 9-0-1 records.

Mike was on the draw and opened with an Arcbound Worker. When he put the counter on the 1/1 he also plopped down a pile of coins nearby. "I'm very optimistic."

Dan had a third turn Cub after Mike's Leaden Myr. Mike made an Arcbound Crusher and smiled at his pile of coins. Dan attacked with a Cub and made a Razor Golem. Mike attacked his two Arcbound guys into the Golem but Dan had no blocks. Mike announced, "Enough with the Cub." He killed it with Essence Drain.
Dan played a Loxodon Mystic and on the next turn Mike attacked with only his Worker, "Roar." Dan put the Mystic in the way but Mike had the Predator's Strike. He followed with a Glissa while Dan looked at his one forest in play and his own Glissa in hand.

Dan took Mike to fifteen with Razor Golem. He Betrayal of the Fleshed Glissa and regrew his Mystic. Mike shrugged and played a Slith Bloodletter. Dan waited on his fourth land-preferably green and cast Specter's Shroud and passed the turn. He tapped the Crusher when Mike declared attacks. Mike sent his Slith in and Dan put the Razor Golem in the way but Mike had another Predator's Strike.

Dan found his green mana and played Glissa-much to Mike's surprise, "Ahhh…you have one too."

Dan was tapped out and Mike sent his 3/3 Crusher and the Slith into battle. Dan was shell shocked from the Predator's Strikes and contemplated a third. He looked at Mike for any visual information on his face and decided to bite. Mike shrugged and regenerated his Slith. He added a Tel-Jilad Exile.

Dan put four in his pool and killed the Crusher. He used the mana to tap down the Exile and the now 4/4 Worker with Blinding Beam. With his remaining mana he equipped his Mystic with Specter's Shroud and took Mike's last card in hand-Darksteel Gargoyle.

Mike lost another card-Swamp-and Dan moved his equipment over to the first striking Glissa. Mike had no play. Dan played a Tel-Jilad Wolf and equipped it. He tapped the Exile during Mike's next EOT when he still had no attack and no play.

Dan killed the Leaden Myr after Mike played a Wirefly Hive. He played a Banshee's Blade on his own turn and tried to puzzle out the best way to deal with Mike's Hive. He killed it and Mike successfully made a 2/2 in response. He Bladed up the Wolf and attacked-burning for one even though he could have reequipped the Wolf with the Shroud.

It didn't matter and Mike scooped that turn. "No fair, I am supposed to be the one with Glissa. Betrayal of Flesh? That wasn't fair either."

Mike and Dan discussed how the game had played out. Mike had been hoping to get to seven to hold the board with his Gargoyle. The Shroud had put an end to that plan. Dan was curious, "How high do you take the Gargoyle?"

Mike shipped back his hand and looked for six better cards. Dan was holding four land, Myr, Pewter Golem, and a Leonin Bola.

Mike smiled at his next six and proudly announced his turn one play, "Arcbound Worker!"

Dan played a Leonin Bola and passed the turn. Mike was missing his third land drop and used his Leaden Myr to Chittering Rats his foe. Dan made two soldier tokens EOT and untapped to play Gold Myr and equipped one of his tokens with a Bola.

He tapped the Rats when Mike declared attackers. The worker got in for one and Mike played a Grimclaw Bats. Dan tapped out for Pewter Golem and was leery about putting anything in the way of Mike's attack on the next turn. He put one token in the way of Arcbound Worker and Mike pumped his Bats and passed the Worker token to his Leaden Myr that had stayed back.

Dan served with his Pewter Golem and equipped the remaining token with his Bola but Mike turned it to dust. Dan put both his Gold Myr and the token in the way of the Rats. Mike had the Predator's Strike. The Bats were doing Dan in despite Mike mana struggles. Mike played a Skeleton Shard and was able to return his Arcbound Worker EOT.

Mike kept his pressure up and was able to finish off Dan with an Essence Drain.

"I was worried that you had Betrayal of Flesh but I was content to let you choose from my fine selection of creatures-Arcbound Worker, Leaden Myr or the Bats."

Dan kicked thing off with a Bola and when Mike had no play Dan smilingly accused him of slow rolling the Arcbound Worker. Dan played a Leonin Den-Guard. Mike had the Slith Bloodletter and chose not to block when Dan equipped his man and swung in for two next turn. Dan tapped down the Slith but Mike was having no more of those shenanigans and used Turn to Dust on the Bola and played a Skeleton Shard. 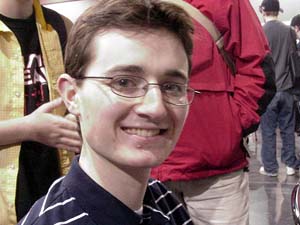 Dan put his naked Den Guard in the way of the Slith next turn and Mike had the ubiquitous Predator's Strike. Dan played an Emissary of Hope and got in for a turn. He had to Blinding Bean Mike's team to buy some time but Mike played a Tel-Jilad Archers during his main phase.

Dan played his own Archers but it fell before Echoing Courage. Mike played out a Tel-Jilad Exile and a Chosen. Dan had all land and he quickly fell before the Onslaught of Mike's creatures.

Mike was now 10-0-1 and was the frontrunner to secure a slot at the Top 8 draft table.