This is what it all came down to. Two single players remain with nothing but wins. On the tenth round they meet to decide who will remain at the top of the standings. Since one is Italian and the other one German there is a big crowd from the moment the game started. 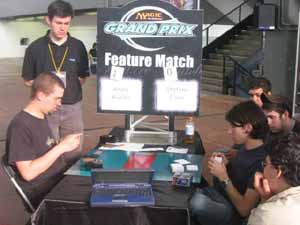 Mueller came out perfectly, with a first turn Spray for Prospector and a second turn Rift. That gave Fiore food for thought. Finally he decided to play a second Prospector and Goblin Warchief. The Red enchantment ate up the Warchief as soon as Andre could untap.

The German fought back with Astral Slide. That kept the Insect out of the Red Zone and forced Fiore to play out extra creatures. He started with Goblin Sharpshooter. A cycled Eternal Dragon quickly took care of that.

Pushed into Guerrilla warfare Stefano unleashed Warchief and Piledriver, certain that Mueller would kill them on the next turn, but dropping his opponent to nine. Andre kept his enchantments - by now he had a second Rift - working, keeping the Clickslither away.

Again Stefano struck: Warchief Piledriver leaving Mueller at four. Mueller played a morph and Fiore sent his Clickslither in. The Angel unmorphed and blocked, eating up the Insect but dying to a Shock.

Despite a full end and two Rifts, Andre was still not out of trouble. Eight life points isn't THAT much against Goblins. He played a THIRD Rift and started hitting Fiore's life totals. The Italian dropped Goblins to act as "Healing Salve".

The Italian tried one last move: Rorix. Mueller showed him Renewed Faith. On the next turn the German had enough mana and cyclers to finish the first game.

Andre's game didn't start well: mulligan. Yet he had Shock ready for Fiore's turn three Warchief. The Italian's hand was brilliant either but he did have Carbonize for the turn three Exalted Angel.

On his fourth turn Fiore finally played another threat, Goblin Goon. Mueller kept cycling away, dropping to sixteen on the first swing. After combat Stefano played a Clickslither that was promptly dispatched with Solar Blast.

Again the Goon entered the Red Zone, pumping it with one of two Goblin Burrows. He added a Goblin Sledder to the table improving Mueller's upcoming Vengeance. Still, the Italian was a way to battle right back into the game.

His Rorix swept in dropping Andre Mueller to a mere two. Again, the German went on a cycling rampage but could find no miracle, or even mere help. The Legend own the table.

Stefano: "No Wing Shards?"
Andre: "Not this time."

He wasn't joking about Shards. On the third game he had them on his starting hand. Spark Spray took out the dangerous first turn Prospector. The second stuck around and Fiore danced around Shards playing Warchief after combat.

On the next turn he felt confident casting Siege-Gang Commander before combat. Naturally the Wing Shards took two tokens. A turn later Solar Blast ate up Warchief. Again, Fiore came right back with some extra pina: Clickslither. The game was so fast, the Italian had to stop just to count up the damage.

Satisfied he couldn't finish his opponent with the Insect that turn he left him at eight. On the next swing Mueller played Wing Shards, trying to slow down the beating. Stefano thought long and hard and finally lost Clickslither. A second Wing Shards gave him further food for thought.

His math had gone out the window. There was no way he could win this turn. He sacrificed all his Goblins to drop his opponent to two. With one card left Mueller pass the turn once again.

Fiore tapped five mana to play Siege-Gang Commander, Mueller tried to cycle in response but Stefano Fiore had everything going for him. He tapped one more mana and Shock his opponent out of the way.

Stefano Fiore is now the only undefeated played in Grand Prix Genova.