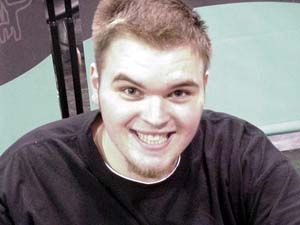 Walls is running a Rock deck featuring everybody's favorite Troll Ascetic while Mike Abraham is playing the Hermit Druid deck capable of a turn two kill. Both players were 9-3 at the start of the round with a loss knocking the loser out of Top 8 contention.

Gabe won the all-decisive die roll and decided to play first. After shuffling each other's deck and a brief dispute about where on the playmat Mike should keep his library, the match was underway.

Gabe played out a and cast Cabal Therapy for Hermit Druid. Mike revealed a hand of Sutured Ghoul, Krosan Cloudscraper, Vampiric Tutor, Mystical Tutor, Ancient Tomb, City of Traitors, and Underground River. Mike drew his card, dropped the Underground River on the table and sent the turn back to Gabe.

Gabe played a Llanowar Elves off of another . At the end of Gabe's turn Mike cast his Mystical Tutor, fetching up a buried alive. Mike accidentally put the Mystical Tutor on top of his library, and the Buried Alive in his graveyard.

*Judge goes to fix the situation*
"No, let it go… it'll be funny" - Gabe Walls
*Mike draws his card, revealing the Mystical Tutor*
*everybody laughs*

When played the Ancient Tomb, cast the buried alive and passed the turn before searching his deck Gabe's eyes lit up, however the judge allowed Mike to search his deck for a pair of Krosan Cloudscrapers and a Sutured Ghoul. At the end of Mike's turn Gabe cast a Vampiric Tutor.

"I'm gonna actually use it though" - Gabe Walls

Gabe drew his card off of the Tutor and sent his elf into the red zone, then flashed back a Cabal Therapy and knocked the Vampiric Tutor from Mike's hand, which now also had a Dragon Breath in it. He then played a Phyrexian Negator and passed the turn.

Gabe drew for his turn and played out a Troll Ascetic. He hit with his Negator and passed the turn. During his end step Mike cast Mystical Tutor to fetch a Corpse Dance, at which point Gabe scooped up his cards.

After joking about Mike's thorough shuffling after Game 1, Gabe decided to play first for game 2.

After both players kept their opening hands, Gabe played a Forest, and Birds of Paradise and passed the turn. Mike had a monster of a first turn by playing a Mox Diamond, Underground River, and Hermit Druid. 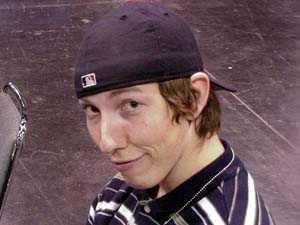 Gabe drew then cast Duress, taking a Reanimate out of Mike's hand, leaving him with Mystical Tutor, Dragon Breath, and a Krosan Cloudscaper. Llanowar Elves joined Gabe's board, then it was Mike's turn.

Mike decided to cast Mystical Tutor for Reanimate during his upkeep, drawing a "How terrible!" from spectator and Latin Dance champion Osyp Lebedowicz.

Gabe drew for his turn and scooped

After the match Mike asked Gabe how tutoring for the Reanimate on his upkeep was the wrong play, and Gabe told him that it left Duress, Cabal Therapy, and Krosan Reclamation as outs for Gabe. If Mike had waited until Gabe's end step, Gabe's only out would have been Krosan.