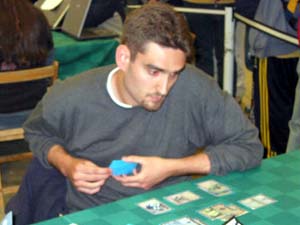 Raul started with a first turn Skullclamp, but didn't draw a land for the next two turns. His fourth turn Gold Myr wasn't enough for his opponent's Skyhunter Cub equipped with Bonesplitter. When JF used a Carry Away on Skullclamp, Raul conceded.

This time Raul played the Gold Myr on his second turn and a Cobalt Golem on the third. When JF missed his third land drop and Raul cast Chittering Rats. It only took two turns for the Frenchman to concede. 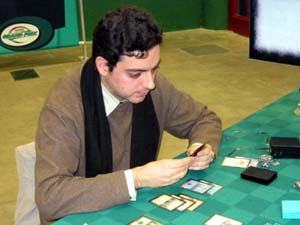 While JF played an Arcbound Stinger and Thoughtcast, Raul had a Leaden Myr, Cobalt Golem, and Viridian Longbow, which promptly turned the Myr into a killing machine.
JF brought Titanium Golem, Auriok Transfixer and Auriok Glaivemaster into play, but the Myr made the Aurioks life a short one. Raul cast another Cobalt Golem and removed the Titanium Golem with a Betrayal of Flesh. An Awe Strike from JF only delayed the unavoidable, and he conceded on his next turn.