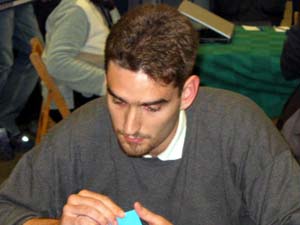 Raphael played an Auriok Glaivemaster and Vulshok Gauntlets, while Raul used a Skullclamp on his Gold Myr and Nim Replica to draw cards. Raul cast Cobalt Golem, and Raphael's response was a Titanium Golem and a Rustpore Ram on the Skullclamp.

The Spanish equiped his golem with a Specter's Shroud and flew over Raphael's army. Next turn an Essence Drain took care of the Cobalt Golem and an attack put Raul at eleven life.

Another Cobalt Golem came along and brought with him a Goblin Dirigible. Raphael played another Vulshok Gantlets and started attacking with some of his creatures and moved the gauntlets around his creatures, forcing Raul to sacrifice some of his creatures. When Raphael added an Whispersilk Cloak to his array of equipment not even Raul's Betrayal of Flesh could keep him from losing the game. 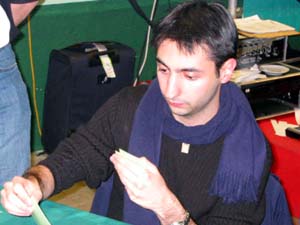 They started a race for damage, with Raphael using an Essence Drain on the Cobalt Golem, an Echoing Decay on the Nim and Raul casting a Betrayal of Flesh with entwine on the guard, bringing the Nim back to life.

Raphael played a Leonin Skyhunter and then a Luminous angel and there was nothing Raul could do.