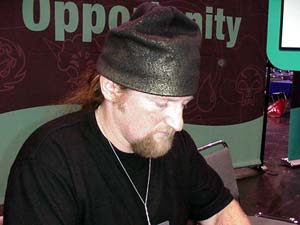 was a compelling battle of magic veterans. Eric Taylor-or EDT as his is known to most of the Magic community-was one of the game's earliest voices on the internet. He helped to codify many of the theories and strategies of the game that is simply accepted as fact today. Eric has continued to play competively over the years but has found himself chasing after his qualifications of late. EDT was playing the explosive Twiddle Desire deck.

Mark Shick is an old California stand-by who was last heard from at Grand Prix San Francisco where placed second behind the notorious Trey Van Cleave. Shick has not been played for some time but is apparently mounting a comeback. He was sporting an interesting Ben Rubin homebrew called The Dump Truck that sported Shadowmage Infiltrator, Meddling Mage and an array of silver bullets.

EDT mulliganed and shrugged when he had land and Chrome Mox on top of his deck.

Shick chastised him for rabbit hunting, "You never check"

EDT strongly disagreed, "You have to… Your system for mulliganing might be wrong."

Eric was pleased with his next six and opened with Ancient Tomb and City of Traitors. Both players were in for a surprise when Shick cast Peek EOT and saw a pair of Twiddles and trip Chrome Mox, "Yikes!" He followed with a Flooded Strand and EDT played one of his Moxes with a Twiddle imprinted on it. Shick used Brainstorm and his Flooded Strand to shuffle down some unwanted cards and came out on turn three with a Vindicate for EDT's Ancient Tomb. EDT cast Thirst for Knowledge during his EOT and pitched a Mox.

Another Chrome Mox from EDT was followed by an Ancient Tomb and Diminishing Returns-EDT pointed out that he had cast two spells so far this turn. His removed pile included a Tendrils of Agony and both players went back to seven cards. EDT had no play and passed the turn.

Shick cast Duress and saw a Thirst, two Mind's Desires, Chrome Mox, Grim Monolith and a pair of lands. He took the soon to be banned card. Shick had Brainstorm and another Flooded Strand and passed it back to EDT with Plains and Strand at the ready.

EDT played a Saprazan Skerry but still had no play. Shick broke his fetch land and on his turn cast his third Brainstorm of the match followed by his third fetch land. Vindicate on the Tomb prompted EDT to Thirst in response and he pitched a Seat of the Synod.

EDT did some math during his upkeep looking back and forth at his lone Skerry and his two Moxes and his hand. Eventually he played a third Mox (imprinting his third Twiddle) and cast his own Brainstorm. City of Traitors followed and he paid six for a Mind's Desire with three spells on the stack.

Shick wanted to make sure he did not need to continually shuffle his foe's deck and turned to the judge, "Can he just shuffle once and reveal three?"

The judge explained that it was Shick's choice, "I can make him shuffle each time?"

EDT was not concerned as he shuffled each time anyone on his own accord. The cards he flipped over were Tinker, Mystical Tutor and Chrome Mox.

He Tinkered away one of his Moxes for Gilded Lotus but looked unhappy with his position and took a long time thinking over his next move. He played the Mox without imprinting anything and cast the Mystical Tutor for Mind's Desire but that was it for his turn.

Shick shuffled back his long ago Brainstorm cards with his Strand and played his fourth of the game and repeated the shuffling process with a Polluted Delta. He then Vindicated the Lotus and played a Seal of Cleansing. Shick looked coldly at his opponent and clearly felt in control of the game.

EDT paid no heed to the Seal and Tinkered his un-imprinted Mox away for another Lotus. Shick untapped and cast Deep Analysis and flashed it back to draw four new cards. He found Duress and promptly cast it. EDT cast Meditate in response and showed Shick two Diminishing Returns, Cunning Wish and Mind's Desire along with two lands. Shick had no other play and went right to his next turn and played another Deep Analysis. He sacrificed a Flooded Strand but could find no Islands or Plains left in his deck. He flashed back the Deep Analysis-he was at six from his fetchlands, painlands and flashbacks. He smoked the Lotus and sent back the turn.

EDT cast Diminishing Returns with two Skerries untapped (one with one counter and the other with two). There was one Mind's Desire in the RFG pile for EDT along with some Monoliths and Diminishing Returns. EDT played a Chrome Mox imprinting Meditate and looked through the third of his deck that had been removed from game. He Tinkered away the Mox for a Gilded Lotus and double-checked Shicks life total of six.

"You have it in hand?" Shick was referring to Tendrils of Agony

EDT could not suppress a smile though, "You did kill yourself!"

Shick kept an opener with Duress but EDT sent his back. When he looked for confirmation he found no land coming.

"I was right this time. That's fifty percent-that's what I'm aiming for. When it's less than fifty you're doing something wrong."

EDT looked at his hand and declared it awesome. He was being facetious and shipped his landless hand back but kept his next one. Shick led off with a Duress and declared, "Four card mulligan!" He took a Tinker leaving Skerry, Mind's Desire and two Brainstorms.

Shick had to do things in reverse order this time and needed to sac a Delta in order to cast Brainstorm. EDT was rewarded with a City of Traitors off the top but was in need of a lot more help to pull out of this one. Shick played a Shadowmage Infiltrator, which prompted a startled, "Johnny Magic?" from EDT who couldn't have been more surprised if the real thing showed up at a GP much less his upgraded Ophidian.

EDT cast Thirst for Knowledge and had to discard Cunning Wish and Mind's Desire. He had one blue remaining and cast Brainstorm. On his own turn he chose to do nothing and allowed Shick to attack for one and a card with his creature. He followed with Duress and had to choose from Desire, Cunning Wish, Brainstorm, Twiddle and a Karn he could not take. He took the Brainstorm and followed it with a Sphere of Resistance.

EDT still had nothing and sent the turn back waiting to clear the cards on top of his deck from his last Brainstorming session. Shick paid five on his own turn to cast Deep Analysis.

EDT shouted at his deck, "Land!" but only shook his head as he peeled a Twiddle. Shick continued to peck away and played a Meddling Mage-EDT thought for a second but allowed it to resolve without a spell-and Shick named Mind's Desire. EDT continued to demand a land from his deck and found another City of Traitors, "Not this one!"

Nonetheless he lost two lands and played a Karn, Silver Golem. Shick played a Seal of Cleansing and took out Karn and swung in for three and a card. EDT frowned at his hand but was not willing to pack it in just yet, even though he confirmed with a judge that his spells from Mind's Desire-should he be able to deal with the Mage-would cost one extra . Shick had another Duress and took Cunning Wish leaving his opponent with three Twiddles and two Mind's Desires. EDT drew a Monolith but could not play it.

Shick continued to develop his board with a pair of Seals and another Shadowmage. EDT found a Skerry but it cost him the City of Traitors and he could still do nothing. Shick eventually won the game with one minute to go.

He turned to the table judge, "Do we even finish the match?"

EDT was anxious to get it going, "I can win in one minute!"

Shick shrugged "I guess we get the five extra turns." 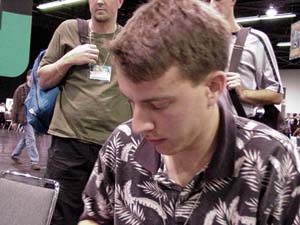 Time was called before either player could present their decks and the table judge informed them that they would not play the final game. EDT wanted his five turns, "I can win in extra turns!"

Shick: "I'm perfectly fine with not playing the third game."

EDT asked to appeal to the head judge and Sheldon Menery came over and quickly explained that as long as they had not presented their decks they would not have the opportunity to play Game 3.

EDT was sore with himself, "I should have conceded but I had not idea what was in your deck."

"They don't call it the dump truck for nothing."