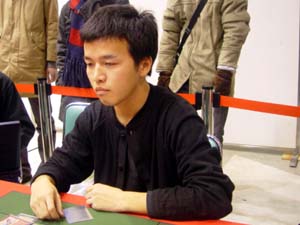 Azuma won Grand Prix Hiroshima last year, which was also in Extended format. In this tournament he's running the same deck that carried him to a championship the last time around - Enchantress. His opponent, Kenshiro Ito, is playing a very aggressive green-red deck. Azuma will need to get his combo off and running fast, because Ito's deck isn't going to give him much time to work with.

Ito opened with Grim Lavamancer, and Azuma played Seal of Removal. The Lavamancer attacked for a point of damage, and Ito played Treetop Village and Seal of Fire. He didn't have the most aggressive draw in the world, and Azuma continued to set up his board with Trade es. River Boa increased the pressure a bit more, as did Cursed Scroll. Azuma had Serra's Sanctum, but no other lands aside from an island. Soon a second Boa joined Ito's side, and the Treetop Village started coming in for damage. Azuma had lost too much tempo to come back, and with a smile and a nod scooped up his cards.

This time around Ito's draw was far more aggressive, as he played a Jackal Pup, on turn two gave it Rancor, then played a second Pup. Azuma had an Argothian Enchantress, however, and started cycling through his deck with Exploration and Seal of Removal. The Pup team attacked for six, and Ito played a River Boa along with Mogg Fanatic. Azuma drew, and put his head on the table while he strained his mind for the correct play. He had plenty of available resources, but not much time to get things going. He played Words of Wind, and ended his turn, staring down what would be lethal damage if not for the Seal. It bounced the Rancored Pup, and Azuma went down to five. Ito replayed the Pup, along with Rancor on River Boa, and then played a second Rancor on Jackal Pup. With certain death across the table, Azuma had one turn to get something going. He drew a card, and started doing math with a piece of paper and a pen. After doing some calculations, led to Worship. This, combined with the untargetable Enchantress shifted the game dramatically. With a massive shield against Ito's offense, Azuma now had plenty of time to put together what he needed. Serra's Sanctum and Cloud of Faeries produced lots of mana, and Exploration and started bouncing up and down, clearing all of Ito's permanents off the table. 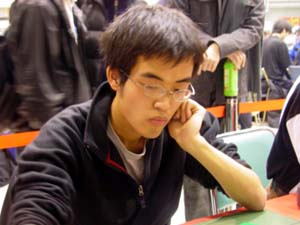 Ito opened with a Lavamancer, and Azuma played Exploration to get two lands into play on his first turn. The Lavamancer attacked for a point of damage and was joined by River Boa, and Azuma summoned Argothian Enchantress. Ito attacked for three, and got out more offense with Jackal Pup and River Boa. Facing down a very fast clock, Azuma made the most of his turn, playing , Cloud of Faeries, and Enchantress' Presence. He didn't have much time to live, but would at least have the resources available to have a chance. Words of Wind and Seal of Removal each drew him two cards, and Exploration kept the turn going. This let him bounce some of Ito's creatures, and Wall of Blossoms provided even more insurance. With a full board out, Azuma was now able to untap and really get to work. He played another Presence, followed by a massive Serra's Sanctum. The enchantments started coming down, and Azuma was getting three extra cards and/or bounces for each of them. The Sanctum bounced a few times, coming back into play untapped thanks to Exploration, and soon Ito had no permanents in play.