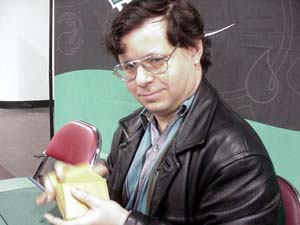 spectator may have dubbed this "[The] battle of the remaining nice guys on the tour," as these competitors prepared to duke it out in Round Three, but the moniker is not quite accurate. While both players are indeed among the nicest guys in the game neither of them were qualified for any upcoming Pro Tours.

There was recently a raging debate in the Star City Forums about the self proclaimed King of Beatdown Jason Opalka and whether he or Mike Flores was the originator of the term mise. While everyone seemed to agree that Mike popularized the term, players old enough to remember that far back all seem to agree that Jason was the original miser.

Jason fell away from the game and has recently come back to it via Magic Online. "Everyone is calling it the Return of the King. I started playing again about two months ago-draft, draft, draft-that's all I do."

Mike Pustilnik has never spent anytime away from the game but he has recently found himself in unfamiliar territory. For the first time since the first Clinton Administration Mikey P-the only player to win a Masters, Grand Prix, and Pro Tour-is not qualified for the Pro Tour and will be skipping PT Kobe.

Jason did not keep his first hand but found his second hand was acceptable. He led off with a swamp and a Chromatic Sphere. He burned the Sphere on turn two to fuel a Vedalken Engineer. Mikey P came back with a Gold Myr. Opalka was stuck on two lands but played Iron Myr and Grimclaw Bats with the help of his Engineer.

Mike played a turn three Clockwork Condor. Jason still stuck for land played a Dragon Blood and passed the turn. Mike's Vulshok Morningstar equipped the Condor and swooped in for one fourth of Jason's life total.

Jason played a third land and sent in his squad of 1/1s. Mike had no blocks and the Iron Myr got a Dragon Blood counter. Mike's next turn saw him attack for four and play an Auriok Siege-Sled. Jason missed another land drop and could not muster an attack. After examining all his offensive chances he reluctantly passed the turn.

Mike passed off the Morningstar to the Siege-Sled and attacked. He used the Sled's ability to prevent the Iron Myr from being declared as a blocker. Jason tossed a sacrificial Bat in the way and Mike was happy to send the turn back to Jason who put another counter on the Myr.

He found a fourth land-still all Swamps and played an Arcbound Hybrid but the King of Beatdown could still not attack. Mike Dismantled the Iron Myr and Jason announced, "You have this one."

Jason opened up with a SwampChromatic Sphere again. This time Mike had a Pyrite Spellbomb to kick things off on his side of the table. Jason had not turn two play but Mike offered up a Vulshok Gauntlets. When Jason played an Iron Myr, Mike was moved to kill it on his own turn and play a Gold Myr of his own.

Land was not a problem for Jason this game and he cycled his Sphere and played a hasty Hybrid and swung in for two. Mike checked with a judge on his turn whether or not Sculpting Steel would get any counters if he copied the Hybrid. When he confirmed that it did, he played it and killed Jason's with an Electrostatic Bolt.

Spire Golem made an appearance on Jason's side of the red zone and the game slowed down. Mike played a Clockwork Condor and passed the turn back without attack. Jason on the other hand was looking to make up for last game and played another Hybrid and traded it with the Sculpting Steel. The Spire Golem and the Clockwork Condor both got bigger.

Mike played an Arcbound Fiend and was deflated when Jason cast Domineer on the next turn. "I was afraid of that." Jason also played a Grimclaw Bats to complete his turn. Mike put the Gauntlets on his Condor and sent it into battle and it ate the Bats. Mike did not have enough mana to move the Gauntlets onto his Myr without tapping the Myr itself. He finally decided to do that and sent it back to Jason.

Jason pulled a counter off the Condor onto his borrowed Arcbound and attacked for eight. He played a Somber Hoverguard and Mike fretted over his options-which were rapidly dwindling. He cast an Auriok Glavemaster and moved his Gauntlets onto the suddenly fearsome whit weenie.

Jason moved another counter and Essence Drained the Condor. He attacked with everyone and Mike went to put his Glavemaster in the way of the Fiend. Opalka shook his head, "He has fear."

Opalka attacked with his Engineer and Mike chose not to block with his Goblin-it was a stone cold bluff on Jason's part and he could not suppress a sly grin as Mike reduced his life total by one. Jason played a Thunderstaff after combat and everyone-including the judge stopped to read it. Mike killed the Engineer and played an Auriok Bladewarden.

Jason played a fourth turn Spire Golem but he was going to have to find an answer to the Goblin and his friend if he wanted to win this match. Mike wasn't going let up the pressure and Dismantled the Spire Golem and passed the turn with his Goblin online.

Jason had a way to race though and cast relic Bane on the Neurok Hoversail. Mike shot him at the end of the turn and took two on his upkeep. Jason had two cards in hand-Grimclaw Bats and Dragon Blood. He pondered how to best use his resources and decided to wait on the Bats playing the Dragon Blood instead.
Mike continued to plink away with the Goblin while the Relic Bane did the same to him.

Jason cycled a Pyrite Spellbomb and passed the turn. Mike played his own Pyrite Spellbomb but had plenty of red mana. Jason finally found a removal spell for the Goblin and Essence Drained it on his next turn. Mike shot Jason on the way out but he was suddenly way behind in the race. Mike cycled his Spellbomb and looked for answer. Finding nothing he pushed his Stinger and Bladewarden toward the red zone. Jason pointed to his Thunderstaff, which would negate the attacks of two separate 1/1 critters, and Mike protested that he was attacking with the Stinger and pumping it with the Bladewarden.

Jason looked to the judge who also felt that Mike had attacked with both creatures. "I have been aware of this the whole game,' explained Mike. "My intentions were clear that I was attacking with the Stinger and pumping it."

The judge did not find Mike's reasoning compelling and the matter was taken before Head Judge Sheldon Menery. Mike explained his intent to Sheldon and then Jason explained what he saw. "Intent is one thing actions are another. He pushed both guys into the red zone and said 'attack' he waited like ten seconds before he said anything about pumping."

Sheldon upheld the original ruling because he did not feel Mike presented compelling argument to overturn it. Mike nodded and they resumed the match. With the Goblin out of the way Jason was able to play out a pair of Grimclaw Bats on his next turn.

Mike drew a Vulshok Morningstar and played it. He had enough mana to put it on his Bladewarden and move it to his flier but chose to just equip the Bladewarden. When Jason went to put a counter on his Bats with Dragon Blood, Mike killed it in response with an Electrostatic Bolt.

Jason had no attack-content to let the Relic Bane eat away his opponent's life. He fortified his side of the table with a Spire Golem. Mike tapped out for an Auriok Siege-Sled on his turn and Jason took that opportunity to Dragon Blood his Golem.

Jason moved his Gauntlets onto the Bats and sent both his men into battle. Mike put his Stinger in the path of the Bats and Jason was content to stack damage but Mike was not ready and he pumped his Stinger to a 4/4 with the Bladewarden. Jason accepted the trade and Mike fell to four with the Relic Bane ticking. Jason tapped out to play a Cobalt Golem.

Mike attacked and compelled the Cobalt Golem to block. Mike used Razor Barrier to kill the Relic Bane and equipped the Bladewarden with the Hoversail. Jason put the Gauntlets on his Golem and munched on the Bladewarden. He played a Vedalken Engineer but did not have the mana to move the Gauntlets off the flier. 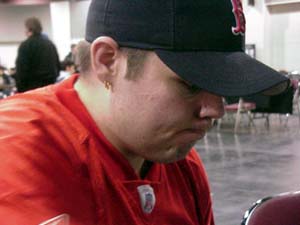 Mike played a Glavemaster and then double equipped his Siege-Sled. Jason took the first of extra turns after time was called and moved the Gauntlets and passed the turn. Mike's turn saw him Arrest the Spire Golem and attack Jason down to nine with his Sled. Mike played his own Gauntlets during his second main phase and sent the turn back to Jason.

Jason played his second Essence Drain of the game and killed the Auriok blocker and swung in for the kill with the Engineer. After the game Mike revealed the Grab the Reins sitting in his hand and realized that if he had attacked with the Siege-Sled a turn earlier he might have been able to win.