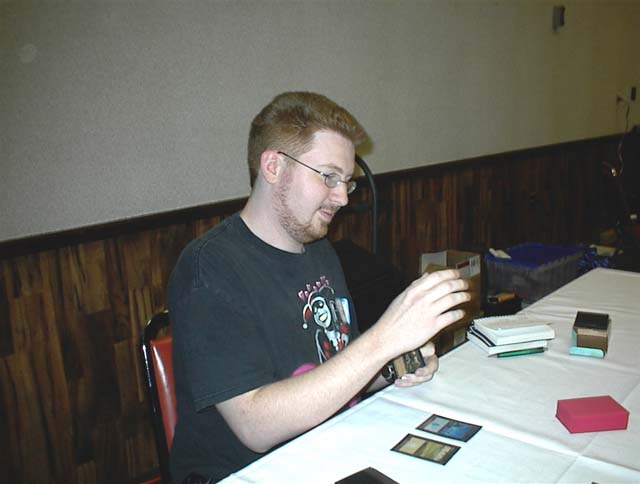 This match was joined in progress, Joshua Beal, playing Goblin bidding is a local player, and is playing in one of the few tournaments he can outside of Radcliff, Kentucky. Besides raising three kids, and keeping a wife happy, Magic is a very hobby he can devote very little time to. His opponent for the round, Glenn Wallace is no stranger to strong success. Well, at least local success. Glenn is always playing rogue decks at the local Books and Music Exchanges and made his first premiere top eight during the 2002 Kentucky state championships. Glenn is keeping with the rogue tradition playing a hybrid GUW madness deck that reminded one of the Mike Long Deep Dog from Nationals last year. 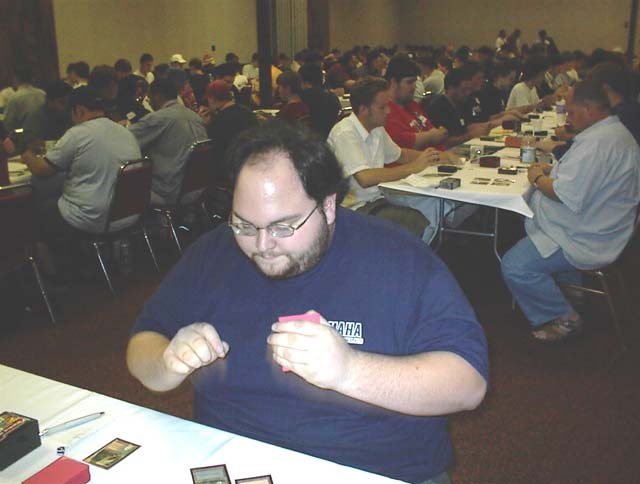 Joshua Beal won the first game. The side boarding was fast, and both players kept their opening hands. Glenn lead off with a land, while Joshua made a play that was closer to the beginning plays of an OnBC event, Mountain, Goblin Sledder. Glenn answered with Wild Mongrel, and Joshua came back with another Sledder. Goblin Warchief came down, and Joshua’s team hit for four. This combat phase brought Glenn to fourteen life. Wild Mongrel attacked Beal, and Wallace followed that up with a Worship. Normally this enchantment would make the goblin player scramble to his sideboard looking for answers or at the least hoping for mana screw. This was not the case for Josh. Two Goblin Sharpshooters came into play during next turn next turn! Joshua attacked for three and knocked Glenn to a low eleven points. Sitting behind the worship though would be very hard for Wallace to continue to do. Mongrel knocked Beal to fourteen, and Glenn passed the turn without anymore action. Cycling Gempalm Incinerator threatened to deal five damage to Glenn’s Mongrel. Stifle however, would have none of that talk, and the mongrel was going to stay around for at least one more turn. Josh continued to bring the beats, knocking Glenn to six in the process. The surprise hit of the new type two format, Goblin Sharpshooter pinged Glenn to four, and Joshua passed then turn. Victory was within his grasp but there was the problem of working from underneath the Worship that Glenn had in play. Sparksmith came down from Joshua, and an attack for three took Glenn to 1. Sparksmith tried valiantly to kill off the mongrel, but Glenn had the Stifle again. Joshua passed turn, perhaps giving Glenn another draw step into an answer. No answer was to be had, and Glenn passed with an untapped Mongrel in play. Holding Might of Oaks and Terravore, Glenn was fairly confident he would at least get one more draw step before the game was over. Josh would have no part in another draw for Glenn, and dealt with the Mongrel before another creature came into play. Like so many games before it, Goblin Sharpshooter ended another matchup for the Goblin Bidding player.