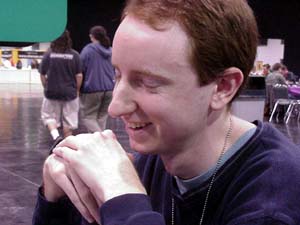 elimination rounds aren't officially on until the cut to eight players but everyone with more than two losses-even a draw more than two losses-knows they are in an elimination bracket as far as their chances to make the Top 8 are concerned. Eugene and Gerard are good friends and members of CMU/TOGIT. They were each sitting at 25 points (or 8-2-1) and the next loss would prove lethal for whoever took it.

Gerard was playing a three-color Scepter Tog deck that was designed by Jeff Cunningham. All four of the players that chose to play the deck made Day Two.

Gerard and Eugene practice together all the time and the match was being held under the watchful eye of Osyp Lebedowicz. When asked who should win the match-up, Osyp claimed that Gerard should win but as always he may have been lying. When reminded of his tendency to play fast and loose with the facts Osyp just shook his head and sighed, "I wish I was."

Eugene was on the play but shipped back his hand for a new set of six. He kept those. Gerard's hand had six spells but one of them was Brainstorm. He has been known to keep zero land hands so there was no doubt he would keep this one.

When Gerard did cast Brainstorm he found a pair of fetch lands and was very excited to see them. Meanwhile, Eugene had played an Ancient Tomb and a City of Traitors to play Metalworker-he burnt for one. Gerard played one of his fetch lands and wondered, "Am I an intimidating opponent Eugene?"

Eugene was familiar with Gerard's antics and just nodded, "Very." And then went about his game. He made six mana showing off Key, Masticore and Wire. He led off with the Wire and waited for Gerard's response. When none came he prodded Gerard who assured him that it resolved. Eugene played out his Key and washed his excess mana through it.

Gerard sacrificed his Delta on his upkeep and then Vampiric Tutored before tapping out for Wire. He got a Rack and Ruin and played Bloodstained Mire. Eugene tapped his Wire and the two lands. He showed off Chalice and Masticore to make four mana and then untapped his Metalworker. He repeated it and went up to seven mana and put three counters on a Chalice of the .

Gerard just tapped out and played an Island. Eugene was clear of his Wire able to tap the Chalice and the Wire He generated tons of mana and Tinkered away his Chalice-the Chalice was no longer in play when the spell went to resolve-and was able to make an Incubator. He activated it removing twenty-three artifacts.

Gerard sacrificed his Mire and went to his draw step but forgot about Tangle Wire. When he backed up he wanted to float mana through his draw step but the judge would not allow it. The head judge was summoned. Sheldon showed Vampiric Tutor to Eugene and allowed Gerard to back up and float mana if he wanted but he received a warning.

Gerard conceded anyway, "I just wanted the warning." He looked to his playtest partner for advice on how he should have played the match, "Should I have countered the Tangle Wire?"

His playtest partner just shrugged-he was, of course, Eugene.

Gerard kept a hand featuring Annul, Counterspell and two fetch lands as well as Rack and Ruin. Eugene sent his hand back. His next hand had zero mana and he had to send it back. He kept a four-land Wire draw and they were off.

Gerard played his fetch lands on the first two turns and broke them to Eugene's . Eugene just played another and Gerard cast Duress. He saw Chalice, Stroke and Wire. Gerard took the Stroke. "You had four s on the draw?" When Eugene confirmed this, Gerard suggested, "You should play poker."

Eugene drew a Seat of the Synod and passed the turn with three Reefs in play. Gerard sent the turn right back with four lands waiting to play . Eugene tried the Tangle Wire but it was Annulled. Eugene played a Monolith and Gerard let it resolve he cast FoF EoT and Gerard took a pile with Brainstorm and Tog over two lands and Counterspell.

Gerard just said go and Eugene did the same. Gerard Brainstormed and shuffled with a Mire on his next main phase. He followed with a Psychatog and passed the turn back to Eugene. Gerard checked to see if he could do lethal damage and only chose to serve for one.

Eugene cast mystical Tutor on his upkeep for a Tinker. Gerard was holding Rack and Ruin but could not do anything because there was only the Monolith in play. Eugene played a Seat and Tinkered it away. A brief counter war developed and Gerard emerged the winner.

He Brainstormed on his main phase and did his figures again. He merely attacked for one and cast Shattering Pulse with buyback on the Monolith. Eugene tried a Chalice for two but Gerard had another Annul.

He continued to nibble away for one a turn and struggling with the math. Eugene had no problems keeping track though and scooped when he knew that Gerard could kill him.

There were ten minutes left in the round although they had extra time, so really it was thirteen minutes.

Eugene's hand had Tinker and but no fast mana. He played a Metalworker on turn three and Gerard had the hard cast Daze. Gerard quickly broke Bloodstained Mire on his third turn and cast Duress. He saw two Tinkers, , Stroke and Mindslaver. After much audible internal debate he took the .

Eugene passed back turn four with no lands and no play.

He recovered on the next turn with a and the two players just laid lands and passed the turns until time was called, which meant they had less than three minutes for their match. Gerard tried a but it was ed. Gerard untapped and played a Tog. Eugene stroked himself for one during his next main phase and found a fifth land. Gerard played another Tog and attacked for one. 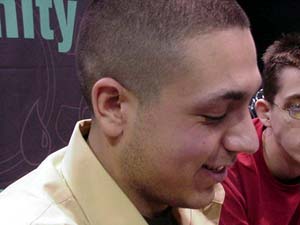 Eugene cast Stroke for two and found another land and played it. Gerard swung in the two Togs and did his math but only dealt two. He played a Back to Basics and all the lands left available to Eugene were two Islands. He used them to attempt a Monolith but it was Annulled.

Gerard took his friend to fifteen and passed the turn. When Eugene tried to figure out if he was dead next attack step, Gerard demonstrated that he could only deal thirteen without assistance from some other card. Eugene was satisfied and played a Key and a laid an Ancient Tomb.

Duress took away a Tinker leaving him another one. Gerard attacked for six-removing some yard cards to do it. Eugene played a Seat and Tinkered away the Key. Gerard countered and Eugene scooped.