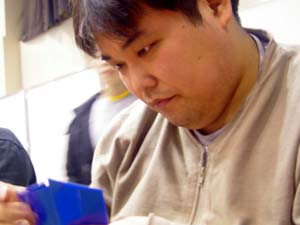 who follow competitive Magic certainly recognize Tsuyoshi Fujita, the first Japanese player to make a Pro Tour Top 8. His opponent this round is Masahiro Nishiwaki, an old school player who has been around since the beginning of Japanese Magic. It's a battle of fast red decks with different strategies, as Nishiwaki is running Red Deck Wins, while Fujita has Goblins.

Fujita opened with a Mogg Fanatic that Nishiwaki killed with Firebolt. Turn two produced Goblin Piledriver, and Nishiwaki frowned as he played Slith Firewalker and said go. Fujita killed it with Gempalm Incinerator, and sent the Piledriver in for a point of damage. Nishiwaki killed it with Volcanic Hammer, and played Seal of Fire. Goblin Matron let Fujita search up Mogg Fanatic, and the Matron died to . Fujita played Goblin Warchief and a Fanatic, and the Seal killed the Fanatic as the parity war continued. Nishiwaki pulled ahead by killing the Warchief with another Flametongue, and Fujita started pedaling back, playing a Warchief and keeping it on defense. Nishiwaki used his advantage to its fullest potential, summoning Blistering Firecat and sending it in for an attack along with both Flametongues. A turn later, the game was over.

Fujita mulliganed down to six, and seemed none too happy about it. He had a first turn Mogg Fanatic, which was thrown at a Grim Lavamancer. Fujita's Sparksmith attacked for a few turns, as Nishiwaki used Rishadan Port to slow down Fujita's two land draw. Nishiwaki was stuck at three land himself, and played a Crused Scroll after Fujita had drawn into more land. A Matron provided Siege-Gang Commander, and for lack of any other plays, Nishiwaki sent a Firebolt at the Sparksmith. Fujita played a second, which died to . Since Nishiwaki was now tapped out, Fujita was free to summon the Commander, which died right away to Firebolt as could be expected. stayed back on defense as Fujita charged with his 1/1 Goblins, and it died to Blood Frenzy. With seven cards in his graveyard, Fujita dropped a game shifting bomb on the table in Fledgling Dragon, which convinced Nishiwaki to concede. 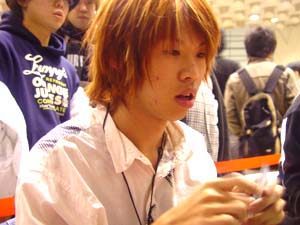 Nishiwaki had a first turn Pup, followed by Grim Lavamancer and Seal of Fire, while Fujita went through turns one and two with no plays. Nishiwaki's board improved with Rishadan Port and Seal of Fire, while Fujita could only muster a third turn Skirk Prospector. It died to Seal of Fire and Nishiwaki summoned Fledgling Dragon, leaving him with one card in hand and a surefire Scroll. Goblin Matron searched out a Mogg Fanatic that came out right away, as Fujita struggled to stabilize the situation. The Lavamancer shot the Fanatic (it shot back for a trade), allowing Blistering Firecat to get through for seven damage. Fujita drew, thought for a bit, and then sighed in frustration as he quickly collected his cards.