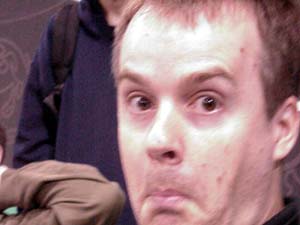 Chad Ellis recently returned to shores of this country after a job assignment relocated him to Germany for the last few years. Without the camaraderie of his YMG teammates and combining the rigors of a new job and the attentions of a new bride he found little time for Magic. He is back in the New England area and is collaborating with old teammate Rob Dougherty to publish a board game in the near future.

The lure of the game was too much to resist and when he won a three-round bye at a YMG Trial he decided to come and try his hand at higher level competition for the first time in years. He went 7-1 yesterday-a feat he credits almost entirely to the pair of Test of Faiths in his Sealed Deck. His deck for this round was an intriguing concoction of card drawing and some removal with only ten creatures.

"It is definitely a Chad deck," smiled the resurgent YMG player.

Gabe Walls shrugged, "I don't know who you are. I am like four months ago, dude and you're like ten years ago." Actually it was just months ago that Gabe Walls was removed from the YMG team. There was not tension to be found in the air though and both players joked easily as they settled into play with a pair of losses under each player's belts.

Jordan Berkowitz-riding a three match losing streak--wandered by and could not believe that Gabe was doing so well. "Gabe, I don't think you are actually better than me but your opponents don't get as lucky against you as mine do."

Gabe just rolled his eyes at his sulking friend and waited for Chad to finish his meticulous job of shuffling. Once Chad finally presented the deck, Gabe was confident it was randomized, "I am just going to cut you."

"I will do the same, cause you look like a trustworthy gentleman."

Chad was excited by his fist turn play as Turian was one round back and proclaimed, "Arcbound Worker!"

Gabe, who had played first, played a Leonin Shikari that Chad had passed him in the draft, "Thanks by the way."

Chad pouted, "How lucky, your guy is so much better than mine." He played a Morningstar and took only two from the soldier when Gabe had no equipment. He did have a turn three Razor Golem.

"How lucky indeed." Chad played a Nim Replica. Gabe played an Island and Chad took three from the Golem. Chad played a Darksteel Ingot and equipped his Nim Replica and said go. "I think you are being tricksy, tricksy with artifact removal."

"In my blue white deck?"

"There is a four mana instant that would explain you saying go."

Chad took three and Gabe passed the turn. "Now there is a five casting cost spell that would explain you saying go."

Chad played a Chittering Rats and equipped it with the Morningstar. When he put it in the way of the attacking Golem Gabe had the Altar's Light. "Let's not pretend I didn't know you had that."

Chad had another Chittering Rats. He put his Nim Replica in the way of the Razor Golem and sacrificed it after damage on the stack. "You are going to Test of Faith me out of the tournament."

Gabe actually had the Roar of the Kha to save it. On his next turn Gabe played a Pteron's Ghost and attacked. Chad played Needlebug and blocked. On his turn he drew five cards with Promise of Power and Gabe rolled his eyes, "I should have mulliganed."

Chad was able to attack with the Rats and Gabe was not anxious to lose his men to Predator's Strike and fell to eighteen. He got in for one with his ghost and Chad dropped to six. Rats and Arcbound Worker came in next turn and Gabe looked at Chad's grip full of cards, "Five cards you have to be kidding me."

He took the three and Chad played a second Lifespark Spellbomb. Chad fell to five on the next attack, "I can't Promise of Power anymore." Chad attacked with a Needlebug and Gabe put his Leonin Shikari in the way. "I didn't realize that when you played that guy he was just a grey ogre. I assumed you would be moving equipment around."

Chad went to Predator's Strike and then thought better of it and wanted to stack damage first. Gabe protested that he had tapped mana and announced the spell. The judge made him cast the giant growth prior to damage and Gabe removed the guy from the game with Altar's Light. On the next turn Chad used a Spellbomb to double block Razor Golem with a land and Rats. Gabe saved it with an Echoing Truth and replayed it.

Chad used a Deconstruct to force Gabe to sac the Ghost and was able to kill the Razor Golem in combat with a Predator's Strike. Gabe played an Auriok Glavemaster and Chad teased him, "You really should have some equipment in that deck."

A turn later Gabe drew a Leonin Scimitar and played it. He attacked with all his men and Chad Terrored the Glavemaster. He used his Spellbomb to block the Shikari and Gabe moved his equipment over to the Myr to get in for two.

Chad cast Thoughtcast with a chuckle, "You never saw that coming did you?" He killed the Scimitar with a Rustspore Ram and a turn later made a 4/4 flier with his second Promise of Power. "Sadly I have the mana but not the life to entwine this."

Chad dropped his opponent to eight with the token and played a Frogmite. Gabe had played a Leonin Elder and crept back up to nine with its ability. Gabe was frustrated with his opponent at two and seemingly nothing but land on top of his deck.

Finally he drew a Vulshok Morningstar and sent his 3/3 Myr into battle. Chad chumped with his Worker and moved the counter to his Rustspore Ram. The threat of the Morningstar and an Auriok Transfixer kept the flier at bay. Gabe finally drew a Viridian Longbow and Chad conceded.

Gabe opened on the draw with an Auriok Transfixer after Chad opened with Seat of they Synod. Chad played a Morningstar and Gabe had a Copper Myr. Chad played a Frogmite but Gabe had the Longbow and killed the Worker making a 3/3 Frogmite. 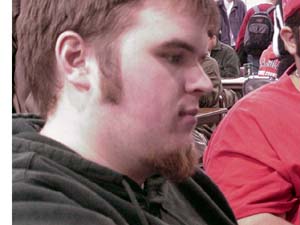 Chad equipped his Frogmite and sent it in for five. Gabe played a Razor Golem and equipped his Glavemaster with the Longbow. He swung in with his team for six.

Chad forced him to sac the Ghost when he blocked the Frogmite. Chad played an impotent Chittering Rats. Gabe shot it down on his turn and attacked for six with his team. Chad could not cope with the army of creatures and he soon conceded.

1 Grim Reminder 1 Hunger of the Nim