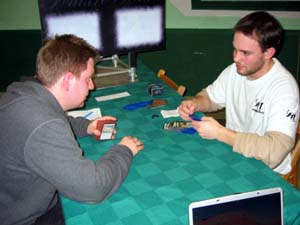 Gundersen is the only undefeated player in the tournament and they're playing to decide who wins the table.

Thomas started with Auriok Bladewarden, Leonin Battlemage and Razor Golem to Antoine's Tanglewalker, Tel-Jilad Exile and Fangren Hunter. On his turn Thomas Arrested the Fangren and Electrostatic Bolted the Tanglewalker. Antoine looked dazzled and both players agreed that that had been a good hand. Thomas sent the whole team in, and Antoine dropped to seven, and played his Loxodon Warhammer.

Thomas used the battlemage ability, showed the Blinding Beam and attacked thinking he had won the game. Unfortunately (for him) Antoine didn't agree and Shattered his hope (the golem in this case) and went to three life. Antoine then played an Elf Replica, which besides being able to block one attack, could also sacrifice himself to remove the Arrest.

Thomas, thinking this was the Frenchman's intention, attacked with the battlemage, but Antoine used an Echoing Courage and the elf killed the auriok. Thomas then played Klark Clan Grunt. Had he used the battlemage and then played the grunt before the attack, he would have been able to save the mage with his bladewarden.

Antoine equipped the elf and attacked, going back to eight life ant putting Thomas at ten.
He then uses the elf to clear the Arrest, and on his next turn equips the Hunter, increasing the difference in life points and forcing Thomas to concede...

Antoine: "I had never played with warhammer before..."

Once again Thomas began with Auriok Bladewarden, but followed it with Pearl Shard and Hematite Golem. Antoine played a Viridian Longbow and cleared Thomas' artifacts with Viridian Shaman and Creeping Mold, and the warden traded with the shaman in combat.

Antoine played a Tangle Golem and for some turns it was the only creature in play, taking Thomas to eight life. The golem was finally removed with an Electrostatic Bolt, and replaced with an Elf Replica and Tanglewalker.

Thomas killed both creatures with a Fireball and played Loxodon Mystic. Now it was Thomas time to attack, eventually bringing his opponent to seven life. When Antoine used and Iron Myr to block the mystic, after two Echoing Courages and an Razor Barrier both creatures continued in play.

A Somber Hoverguard from Thomas didn't seem to be enough for Antoine's Plated Slagwurm, but an entwined Blinding Beam gave him the turns needed to deal the remaining damage to Antoine.

Olivier came in support of his brother (literally leaning over Antoine's shoulders, and started looking menacingly towards Thomas)

One of Thomas Auriok Bladewardens was once more the first creature in play. He cycled a Sunbeam Spellbomb, played Leonin Battlemage and Hematite Golem. Antoine cast Tanglewalker, Viridian Longbow and for a couple of turns tried to kill the warden, but it was saved with a Razor Barrier. Finally Antoine was able to kill him, and also Deconstructed the golem, using the mana to play a 5/5 Wurmskin Forger.

The players started racing, both bringing more creatures to play, but Antoine's removal (Barbed Lightning and Creeping Mold) unbalanced the race in his favor and was able to win the match at two life.