Round Two: Adam Prosak vs Will Lutes 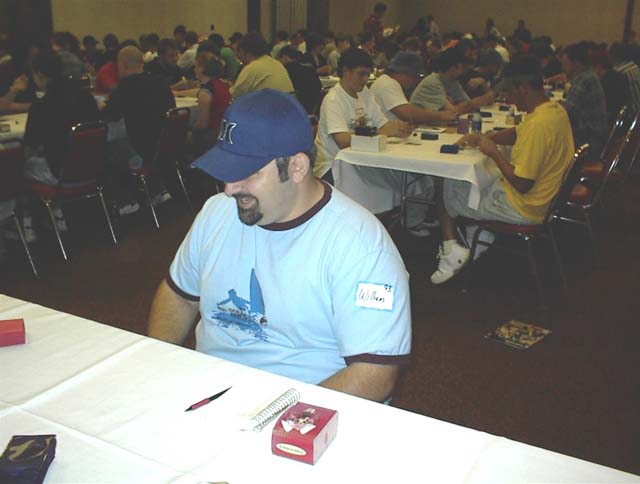 Adam Prosak, Tennessee native and college student at Xavier University is not a stranger to success. He has qualified for three Pro Tours, United States Nationals (twice!) and finished in the top eight of Grand Prix Cleveland. Will Lutes, on the other hand, maybe considered a bit of a stranger. The married man from Radcliff, Kentucky is one of the defending Co Champions of this years State Championship, and is involved with one of the major Kentucky play testing teams. Adam is playing a Black White homebrew that several of his Ohio friends are also playing that reminds one of the Nassif deck from Euros. Will decided to play R/w slide after the moderate success the deck had at Grand Prix Bangkok.

Will won the roll, and decided to go first. Both players kept their hands, and tap lands were the first plays from both guys. Will decided that he hated to play land and missed his second turn land drop. Adam cycled a Gladiator away during Will‘s end step. Upkeep saw him discard a Smother to return the gladiator, and Will finally drew a second land to power out the Eternal Dragon, which lead to a second white source as well. Of course all this land went to good use, as Will cast the Astral Slide that was hanging out in his hand.

Adam cast a Withered Wretch, and passed the turn. Will sighed loudly as his deck failed to produce a fourth land. Renewed Faith removed the Wretch from the game temporarily. Children played outside in the think muggy air of Louisville, Kentucky while Adam thought about his best play. He made a barren moor, and passed turn. Will finally ran his fourth land, and cast Teroh’s Faithful. In response, Eternal Dragon cycled for a plains, and Undead Gladiator made his second cycled appearance of the game. Cabal Therapy was cast naming Decree of Justice and the hotness that was Lute’s hand was incredible. Two Angel, Starstorm, Faith, and Wrath of God.

Of course, Adam sacrificed his wretch, and made Lutes discard the double angel. Wrath cleared away the Faithful. The game almost started again, and the recurring Eternal Dragon game was about to start. A bunch cards were cycled in between these turns. Dragon came back, and Awful was discarded by Adam to bring back Gladiator. (Awful was Plague.) Another Awful was discarded to bring back Gladiator (Smother) and the monotony of cycling dragons and gladiators and other cards to find that dream hand just kept up.

Finally, a beater was added to Will’s side, and faithful came in, gained four, and was slide out when Adam cycled a Dragon. Writhed Wretch came down, and ate one of Will’s Dragons. Eternal Dragon was hard cast and joined Will’s team. Duress from Adam showed Will’s hand, which was Faith, Wish, Storm, and two other cards. And the Wish was sent to the graveyard. Akroma’s Vengeance came down, killing everything but the Dragon, and Adam brought his own slide. This far in the match, it seemed like something that would be played out at GP Detroit. After attacking with the Dragon, Will added his own slide, and Adam played a Faithful of his own. Decree of Justice made Adam three soldiers at the end of will’s turn, and that all came in sideways. The attack took Will to 35. Wrath removed the tokens, but failed to kill off faithful and Will’s Dragon. Lightning Rift came down for Will, and Adam sadly exclaimed,

Adam made four angels with Decree of Justice 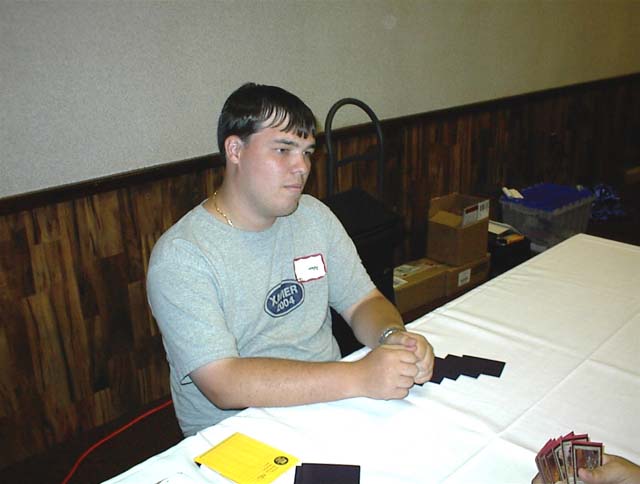 Wrath of God dealt with the Angelic problems. Soon enough Will had two Exalted Angel, double Slide, Dragon and Rift. Noting that Adam had indeed not died, I noticed his board, Dragon, Faithful and Slide. Things did not look like they would be finished up anytime soon. A bunch of cycling happened, the board was cleared by the slides, and when it was over, Will controlled two Rifts, two slides, and the life totals stood at 28 to 30 with Prosak down by two.

The feature area started to get fill as the “Better players” won, and somehow the game looked like it would never end. Burning Wish for Will netted him a spicy Decree of Justice, and things still looked about as awful as they could for Adam.

Adam top decked a Akroma’s Vengeance and cast it without a second thought. Will cycled, and removed Adam’s Eternal Dragon and Faithful from the game for what seemed like no good reason at all. The rift action from Will took Adam to 24, another Eternal Dragon was cycled by Will and saved his own Angels and hit Adam down to twenty. The Vengeance resolved, and slowly it looked like Adam was gaining control of the game. Duress later in the turn pulled Decree of Justice from Will’s hand.

The game looked like it would come down to a decking battle, as Will had 17 cards to Adam’s 10 in their library. Eternal dragon knocked will to 25, and Wrath of god cleared out the double angels and Prosak’s dragon. Withered wretch came down, and tour apart will’s graveyard. Following the lack of action from Will, Teroh’s Faithful entered play for Adam again. Wretch and Faithful knocked will to 22. Will looked to go to the ground and made 10 soldiers with the cycled effect of the card. The attack made Adam take nine, and he was forced to go to 19.

Will was holding the game winning card in his hand. He took his turn, cast Burning Wish and made a critical mistake. When he looked through his sideboard, he took two cards, put one in each of his monstrous hands and debated in his mind for which one to keep.

“So, you gonna pick the card that beats me?” quipped Adam.

Nothing but silence came back from Will, as the feature match area was crowded five people deep.

The Burning Wish picked the wrong card. Ancestral Tribute made it’s way into Will’s hand as the crushing Decree of Annihilation went back into the sideboard. Adam beamed triumphantly, as he knew his talk almost undoubtedly made Will pick the wrong card.

Ancestral Tribute made Will gain twenty life, and raised his life to fifty nine. Wretch ate the Tribute before it gained Lutes another twenty, and Adam knocked will to 55. Wrath of god from Will made Prosak cycle some cards to save his important guys. 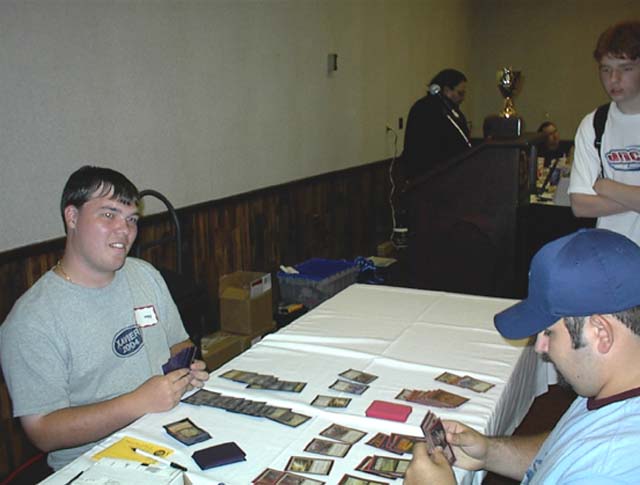 Cabal therapy from Adam missed on Wrath of God, and showed two lands and a rift.

Will, ripped like a really good player, and cast slide. He followed that up with Rift, and a second one. Decree of justice was cycled by Adam and the eighteen soldiers it made came rushing in to the field of battle. Will took fifteen from the soldiers after the abilities of Slide and Rift Resolved. A flashbacked Cabal Therapy resolved and made sure that Will did not have any mass removal spells in his hand.

Adam dropped the final blow in this match. Hardcasting Decree of Justice netted him nine Angel tokens, and he confidently passed the turn back to Will. Will Drew a mountain, one of the few basic lands left in his deck and extended the hand.

Although both players played near flawlessly, two minor mistakes from Will let Adam stay in contention for the match. Adam moves onto round three with a perfect record, while Will drops to 1-1.