Stephane: 16th GP Warchau in 2001; 2 times Regional Champ in Normandy; 4 times Nationals contender; best National performance: 29th place. Other mentionables; when you end up 9th place in a PTQ in France, you're named the "Ranche".

Peter: played Worlds 4 times already (best finish 22nd), made top-8 at GP Copenhagen 2000 and went to the Pro Tour 8 times. Peter is well known in Belgium as a all time nice guy and co-owner of the Spacebar in Leuven; hide out for a lot of Belgium/Dutch players when testing for a Pro Tour. One of the other owners of the Spacebar was 3rd at the first World Championships; Dominique Symens. Old School players for sure... 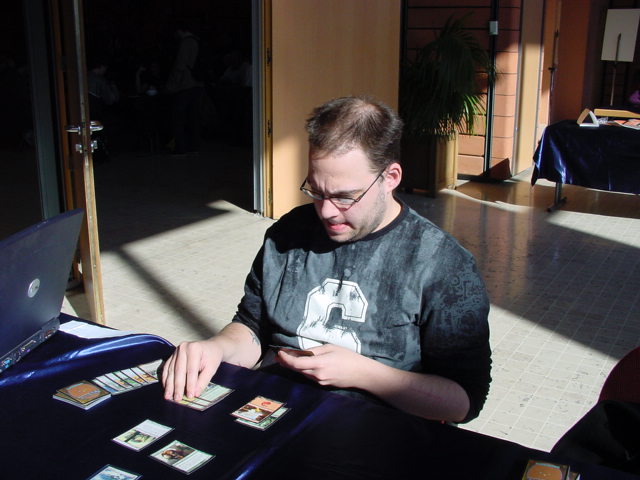 tephane wins the toss and chooses to play. He starts with mountain and Leonin Scimitar.

Peter just has Tree of Tales and passes turn.

First excitement is a Turn to Dust from Peters side on the Scimitar. Stephane answers with anther land and does absolutely nothing. You kind of miss the morph era...

Peter wants a turn 3 creature, so he builds an Alpha Myr. Stephane makes Stalking Stones as land-drop and a Goblin Replica as creature.

Peter makes the first attempt to make a difference in lifetotals and attacks with the Alpha Myr. Stephane does nothing, because he thinks he can make better use of the Goblin Replica with some mana untapped, so he goes to 18. In his next turn he just drops another land en passes turn.

Peter drops a Myr Enforcer the cheap way and attacks with Cathodion and Alpha Myr. Stephane chooses to block the Cathodion and, after damage on the stack, kills both his Replica and the Myr Enforcer.

In Stephans next turn, the Cathodion gets burned and Peter has to take some damage, because there is nothing much to do with the extra mana. What a waste of perfectly good mana...

In Peters turn, a Tel-Jilad Exile comes into play and the Alpha Myr gets some more lifepoints from Stephanes total. He's at 14 now.

Stephane can only make a Cathodion on his turn.

Peter reacts by Creeping Molding the Cathodion; mana is being used a little by Shattering the Myr. Stephane still has t burn for 2 and gets another two from the unblocked Tel-Jilad Exile.

Peter makes Copper Myr and Goblin Replica and attacks with the Tel-Jilad; that guy can regenerate and make stuff on Stephanes side very breakable... It makes him the MVP for the moment!

Then things are a little more like a real battle between mages; Replica kills Titanium Golem and Peter gets to activate a Stalking Stones first.

Peter attacks with Stalking Stones and meets a Titanium Golem. Both are not able to live to tell the tale and die.

Peter plays Goblin War Wagon and Vulshok Gauntlets; Stephane also gets his chance to activate Stalking stones at the end of Peters turn. In his own turn he builds a Frogmite and Myr Enforcer.

After the next combat steps, Stephane finds himself at 6 life and facing a big threat. He cannot make an attack and passes turn, so Peter stays at 15.

Peter equips the Gauntlets to the Exile and attacks with both the Exile and the Warwagon; Frogmite and Stalking Stones chump during the attack, but kill the Warwagon in the process. The Gauntlets are being given to the Myr left on Peters side to give the Exile a chance to untap on the next turn, but it leaves Peter completely tapped out.

Stephane makes a Triskelion that shoots the Exile immediatly and the Exile dies a horrible death not being able to regenerate now.

Peters mana Myr does not untap, but a Vulshok Berserker delivers 3 damage to Stephane and brings him to 3.

Stephane makes Auriok Transfixer and Iron Myr, while Trikelion does 1 damage in the attack. Also a Myr Reriever comes to make the most of Stephanes defense. But Peters turn gives him Tel-Jilad Archers; scary 2/4 body with protection from artifacts...

In the next couple of alpha strikes, the Archers and the Gauntlets decide it in Peters favour and it's time to sideboard for everybody except me and Stephane.

Peter has a lot of sideboard plans and gets rid of a lot of very bad cards from his maindeck. A complete new color (blue) makes its way to the table as a Krark-Clan Shaman, Alpha Myr, Malachite Golem, Incite War and Farsight Mask (huh?) make way for better cards like Regress (twice), Quicksilver Elemental and Neurok Spy amongst others.

Stephane chooses to start again and starts with a mulligan. Peter keeps.

First plays that see the table are Pyrite Spellbomb and Copper Myr on Peter's side and Goblin Replica on Stephane's side.

Spellbomb makes sure the fake Goblin won't do some serious damage to the mana Myr. The reason behind plan becomes clear when Peter fails to play a land and just makes an Iron Myr.

Stephane wished he could play the Triskelion again, but has to settle for Skyhunter Patrol. Peter gets a Cathodion on his next turn, so despite the unstable mana build up, he can still attack on his next turn when Stephane does nothing about the board.

And except for attacking for 2 with the Skyhunter, nothing happens indeed. 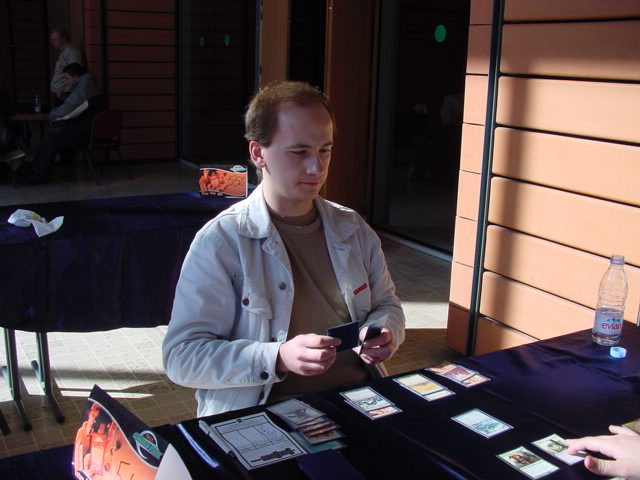 Peter serves with Cathodion and plays the Archers again after topdecking a forest. Stephane plays another land and sits behind his 6 lands and Skyhunter. He is not doing nothing, because the land played is Stalking Stones, so he might be able to activate it when he survives the next attack Peter has in store for him.

Peters Army serves for 5 and Stephane activates Stalking Stones end of turn, but not after Peter played the Vulshok Battlegear. Triskelion is Stephane's next plan. Although he mulliganed Stalking Stones are left untapped.

Peter still has only 4 lands and gears up Cathodion. Myrs become tapped to add Myr Enforcer to the already impressive squad on Peters side. Achers and Cathodion (6/6) attack.

Stalking Stones and Trisk block the Cathodion while Skyhunter takes care of the Archers. Stephane wants to use some of the Triskelion counters to shoot the Archers when damage is on the stack, but he gets reminded that the Archers are not to be touched by any artifacts. So when he understands his mistake, the Triskelion aims at some Myrs on Peters side.

Cathodion dies and brings Peter down to 14 because of the manaburn.

Stephane uses his turn to enjoy the weather in Lyon, because he plays no spells, does not attack with the Skyhunter and leaves his 7 mana open. He has two cards in hand though. Peter is not the man to take any risks and plays only a Neurok Spy on his next turn.

On his next turn, Stephane makes some equipment to make his Skyhunter a little more impressive; Bonesplitter. The Skyhunter uses that renewed faith to bash Peter to 10, but now Stalking Stones is the only creature holding the fortress. He gets Bonesplitter after attack though.

Peter attacks with Neurok Spy, Myr Enforcer and the Archers and the Enforcer trades with the Stones. Stephane is at 8 now, but faces a lot of damage if he cannot bring some more creatures to the table to help out the Skyhunter. His deck fails him, because on his own turn, Stephane can only equip his Skyhunter again and makes no attempt to beat Peter any more.

Peter does not want to trade too many of his guys and just attacks with an equipped Neurok Spy that cannot be blocked as long as the Bonesplitter will stay on the table. The Spy drops Stephane to 3.

Stephane draws, but fails to topdeck a removal spell to deal with the Spy.

That makes Peter the winner.