With the Pro Tour Theros in Dublin Qualifier Season about to kick into gear, it's time for players who are looking to make their way onto the Pro Tour to turn their attention from Modern to Standard.

If you're looking to get a sense of what types of decks you should expect to face at these upcoming qualifiers, then you need to look no further than the decklists from the Magic Online Championship. The 16 players here showed up playing a total of 10 different decks; and only one of those decks had more than two pilots.

Junk Reanimator decks (much like the list that Mike Krasnitski piloted to the top at Grand Prix Verona) made up nearly a third of the field - making it the clear deck to beat this weekend; a trend that the players here expected would continue through the early weeks of the Pro Tour Theros Qualifier season.

Going into the second day of play, Dmitriy "Butakov" Butakov was in sole possession of first place - but Andreas "Eken." Eklund, Malte "Malteko" Holm, and Hiroki "ht991122" Yamashita were all hot on his heels. When Dmitriy lost his first three Standard matches with his Junk Reanimator deck, it looked like he was going to lose his spot at the top as well. But a win against Christopher "Cozmo" Hartman in the 11th round was just enough for Dmitriy to secure his place in the finals. Joining Dmitriy in the finals was Malte "Malteko" Holm, who was also playing a Junk Reanimator variant. 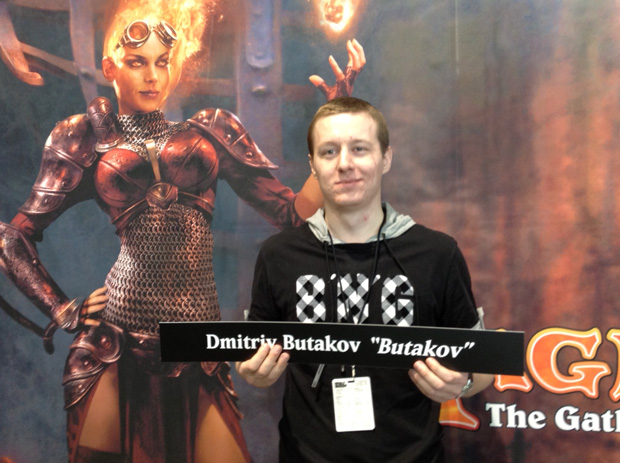 While many of the players at the Magic Online Championship wavered between several different decks during their preparation, Dmitriy knew what he wanted to play weeks before the event – and was thus able to spend that time tuning his Junk Reanimator deck.

"I played it (Junk Reanimator) a long time ago, before it was so popular, and it had very good results for me. So now that it's winning more, that's actually bad for me because people learned how to play, and sideboard against it. But still, I think it's the best deck right now. "

When asked if there were any key cards that made his deck good, without missing so much as a beat, Dmitriy responded by saying that "Every card in my deck is a key one – they all work together to make it very good."

Preparing for three different formats (or even just one) can be an arduous, time consuming task. Rather than spend endless hours (which he didn't have) trying to perfectly solve this Standard format Jorge "painas" Pinazo decided to play Naya Blitz – a deck that he felt he could get a good handle on without spending too much time on the deck. 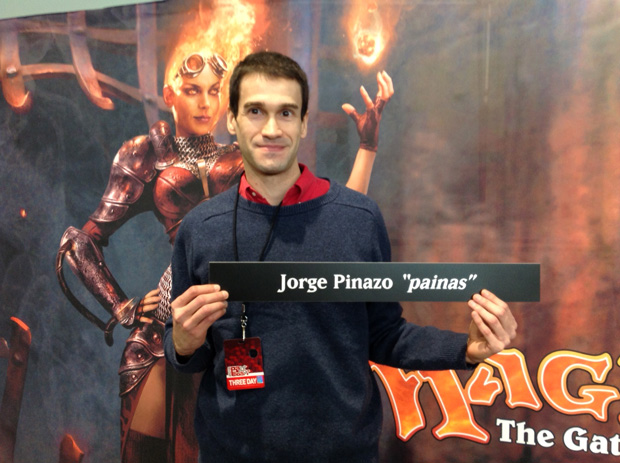 "I picked the deck (Naya Blitz) because I knew I wouldn't need to spend that much time practicing with it. Maybe it's not the best, but it has a lot of very good draws and sometimes you just can't be beat."

While he didn't perform all that well today, Shaun "ArsenalMunch" McLaren felt that he had discovered a key ingredient for Esper Control decks moving forward – Evil Twin.

"The interesting thing about my list is the 4 Evil Twins in the sideboard. Before the tournament I was just banging my head against the wall because I couldn't win with anything. And then I picked up Esper, and I was doing well with it – but I couldn't beat Jund ever. But then I found Evil Twin which beats Huntmaster of the Fells, Thragtusk, and trades with Olivia. Against Reanimator it beats Angel of Serenity. Plus you can blink it with Restoration Angel, blow stuff up, copy other stuff, blow that stuff up – and you can even trade with an Obzedat, Ghost Council by blinking it (Evil Twin) mid-combat. So, Evil Twin is the main thing that put the Esper deck way over the top for me."

Recently, there's been a trend towards making Blue White Red decks particularly controlling. Players have gone as far as to cut their Restoration Angels, and Boros Reckoners (both of which were considered staples as recently as Pro Tour Gatecrash) in favor of additional counterspells, removal, and hard to answer threats such as Assemble the Legions. 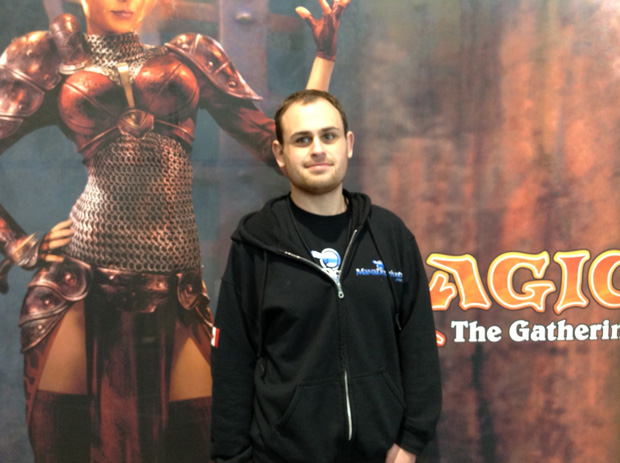 David "Goobafish" Caplan decided to go in the opposite direction – filling his deck with hard hitting threats such as Geist of Saint Traft and Thundermaw Hellkite, and backing them up with Feeling of Dread.

"The deck's basically a much more aggressive version of the old iterations of Flash. The Feeling of Dreads allow you to race aggro decks, whereas Geist of Saint Traft is just terrible compared to Boros Reckoner otherwise. So, it's kind of a card you need to have in addition to Geist - but it's also very good against aggressive decks and against midrange decks since they usually have like 10 immortal type threats like Thragtusk which Feeling of Dread is very good against."

When asked about his inclusion of Boros Charm, David Caplan had a lot of good things to say about it – but he also made it a point to describe its limitations.

"Boros Charm is a two of. It's very bad against aggro decks, but it's very good against everything else. It deals with Planeswalkers when you're playing against Jund by burning them out, it protects your team against Supreme Verdicts against Bant and Esper, but it does come out a lot since there are so many aggro decks." 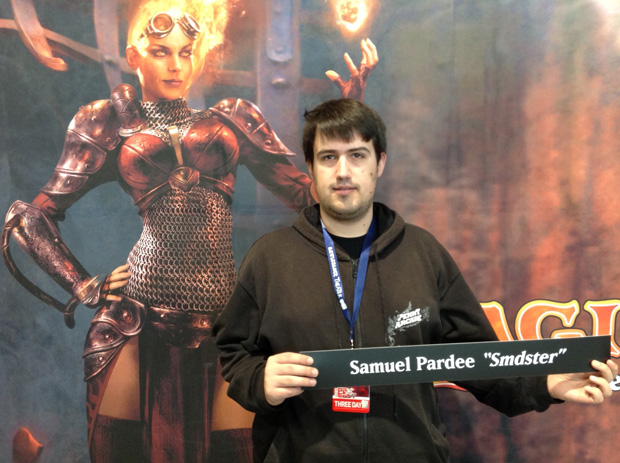 David Caplan wasn't the only player at the Magic Online Championships who decided to cut Boros Reckoner from his deck. Sam "Smdster" Pardee opted to play an updated version of the Aristocrats, the deck that Tom Martell piloted to the top at Pro Tour Gatecrash – making room for key new additions by removing Boros Reckoner.

"I tried to go harder with the synergies of the deck. Boros Reckoner is a great card, but it doesn't actually do anything for you. It doesn't work with Skirsdag High Priest, it doesn't work with the Aristocrat guys, it really just doesn't do anything except 'be a good card'– so I cut that. I added a lot of the steal effects (such as Zealous Conscripts and Mark of Mutiny) because I was expecting Reanimator to be pretty popular, and I found that between your Knight of Infamy, and Cartel Aristocrats – you can steal their Angel of Serenity after they cast it, and then kill it and still be in good shape after they Unburial Rites it against you – which is not the case for a lot of the aggressive decks." 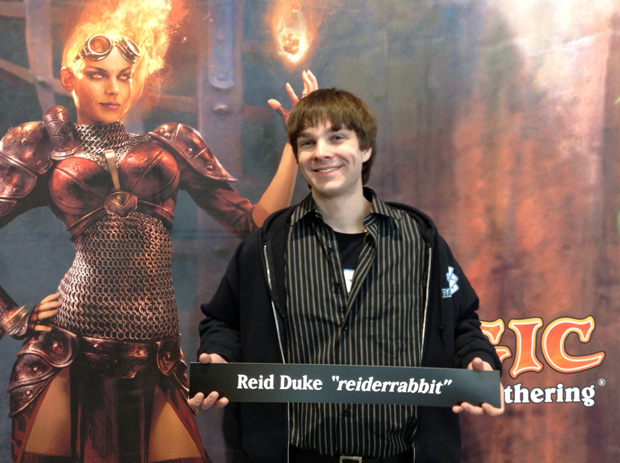 Only Reid "reiderrabbit" Duke was able to emerge through the Standard rounds with an undefeated 4-0 record. However, a 2-5 finish on Day One meant that he was only able to propel himself to 7th place in the standings thanks to the aid of his trusty Jund deck.

3 Liliana of the Veil 1 Murder

4 Huntmaster of the Fells 3 Olivia Voldaren 4 Bonfire of the Damned 2 Garruk, Primal Hunter 3 Liliana of the Veil 3 Rakdos's Return
75 Cards

Do you think you have what it takes to qualify for the Pro Tour? Then check out the entire schedule of Online, and in person Pro Tour Qualifiers here.