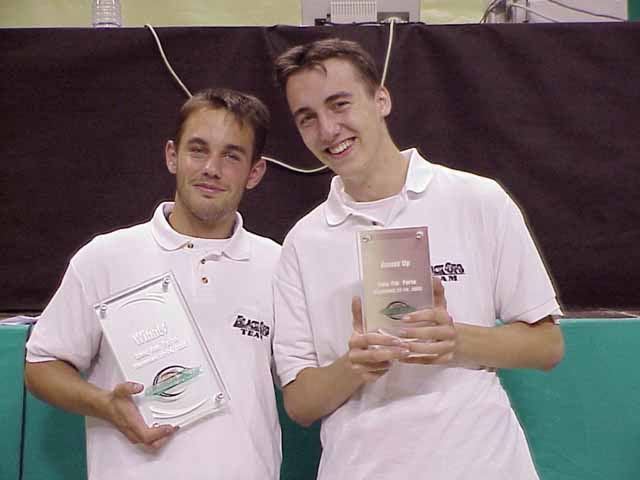 Grand Prix Porto became the first major tournament ever to see two brothers pitted against each other in the finals. Antoine (20) and Olivier (19) Ruel both made their way to the finals, and in spite of what they both expected, it was the older brother Antoine who could walk away with the title. "I will first give him a few days to make sure he isn't crying anymore. Then I'll tease him a little bit. But we have done something together here and it's incredible," Antoine says.

The Ruel brothers started was introduced to the game by a friend about five years ago. "We were immediately enchanted by the universe of the game. And when we discovered tournaments one year later, our interest just grew even more," Olivier smiles. Since then, they've spend countless hours playtesting together, and while Olivier has had success alone, the have also done very well together as members of Team Black-Ops. Unfortunately, that has led to the two of them just being refered to as 'The Black-Ops.' "Now it will probably be 'the Ruels'. Perhaps one day we'll finally be called Olivier and Antoine," Antoine sighs.

At least now they've both had individual success - together. Over two days, the two Ruel brothers ruled the tournament. And when they ended up in different brackets in the top 8, both of them hoped that they would meet in the finals. But they both thought Olivier would win the whole thing. "I think I had the best deck in the top 8, but I can only be so lucky throughout a weekend. I was mana flooded twice in the finals," Olivier sighs.

His mana flood actually made the day a bit less perfect for the two of them. Antoine had prepared to lose, and Olivier almost cried when he was flooded out of the victory. "I even said 'kill me gently, please' before the tournament," the champion reveals. So when his brother drew land after land after land, he couldn't really enjoy the victory as much as he would if he had beaten anyone else. "I am a bit disappointed," Olivier admits, "but him or me is almost the same."

Still, Olivier and Antoine are happy to have each other. They are always good friends, and they both think they have an advantage by being able to test together and support each other. And when the two of them realise what they've done in a few days or so, they might even buy champagne and celebrate. So what is it that makes the Ruel brothers so good? Something in the genes, maybe? Antoine doesn't think so though: "I didn't know there was a gene for luck�"