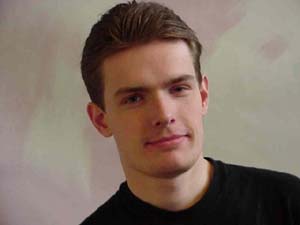 Rune HorvikPro-Tour, Grand-Prix, IRC... When it's about Magic, Rune is there. For the first time in a long while a judge, a European judge, Rune Horvik from Norway has passed the level 4 test.

Let's discover who this guy is and start with the usual questions. When and where did it all start for you?
I started playing Magic in the summer of '94, with Revised. I passed the level 1 test in September '97 and started judging for real in March '98. Since nobody in Norway was seriously organizing the Magic scene, I took care of it."

You're a judge but what else is there in Magic?
I used to work for the Norwegian distributor as Organized Play manager for Norway. When I'm not working, I simply go to events. I took part in most European events last year and I expect to go to every Grand Prix and Pro Tour this season. The rest of the time I'm simply an active online chatter. (Visit irc channels #mtg and #mtgjudge at Efnet for more.)

You were awarded something at Grand Prix Oslo, right?
Yes. Players think I work a lot (too much?) and they offered me a very nice crystal vase. I like it very much, this was a surprise for me and that's a very touching present.

What does being a level 4 judge mean?
First of all, this is sort of a reward for me. I worked a lot this year, I prepared a lot and judged many events. I head-judged three Grand Prix and Pro Tour-San Diego's Masters recently. Apart from that, it means that I can now help the DCI in Europe. The most important thing is to keep a decent number of level 3 judges all over Europe because they are really important for organized play management.

Will it change something in your life as a judge?
In fact, it already changed me. The process had an enormous influence on my behavior and I cherish all the good things from this experience. But I don't see how I could work more.

In one sentence, what's your philosophy of judging?
That's simple: keep the tournament fair and make sure players are having fun.

According to this principle, who are your favorite judges worldwide?
Today's Head-Judge Gis Hoogendijk from the Netherlands and the American Collin Jackson

Despite everything, I'm sure you have weak points, am I wrong?
No, of course. I have two major weaknesses. I'm too friendly with a lot of players. Since I know them very well, I cannot keep a sound distance. But sometimes that's good since they respect me for it. The second one is the fact that I don't pay much attention to other judges. To make up for that I'm doing the judges certification today!

What's the hardest decision you had to take as a judge?
Decisions are rarely hard to take. Sometimes I feel very uncomfortable when I have to take a major decision, but this is because I feel close to the players. My worst memory is when I had to give a match-loss for bad deck registration to a player I knew very well during World Championship. I had to say "Sorry Nicolai, you won't make a good result today."

What was the hardest tournament you had to judge?
Grand Prix Lisbon, for sure. There were 650 players, among which many did not understand a word of English. A lot of players were very inexperienced and not familiar with tournament rules and procedures. Many judges were also lacking experience with major events and we were only 16. But everything went smoothly anyway.

What do you think will be the evolution of Magic from here on?
Since the game is still growing, I'm sure that it will last for a long time. We need (and we have) good tournament organizers and as long as they will take care of local players, the game will strengthen.