Ryan has travelled here from Amsterdam this weekend to play - along with a number of other Dutch players. Although he has been in Prague for a couple of days already, the real business for him begins here. With three byes and eight rounds he would be looking at going 3-2 with good tiebreakers or better to make the second day.

The start of deck-building was delayed slightly; as due to the large number of players some more decks needed to be pre-logged, but eventually we are underway. Here are the cards that Ryan opened: 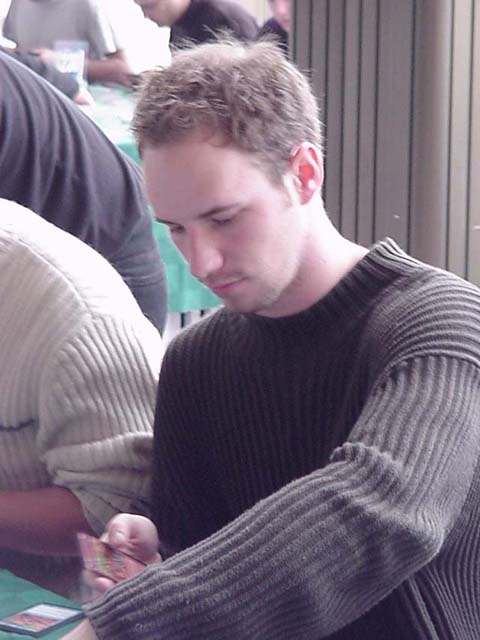 >At an initial glance Ryan isn't too happy with this card selection, and, ignoring Green/White to start with, he looks through for his playable Black, Red, and Blue cards. Red doesn't look too great at first glance, since it has only three good cards - Ancient Kavu, Zap, and Magma Burst. However, in Invasion the Gold cards are equally as important as the single-color cards. Red is redeemed in this area by Smoldering Tar, Terminate, and Plague Spores.

Looking at the other colors we see that Blue has some strong cards - Probe, Wash Out, Exclude and Repulse. It also has Allied Strategies, which is a great card in the right deck.

Black has Duskwalker, and Hate Weaver but nothing special, and like Red, is only good because of the selection of Gold cards.

Green has plenty of good creatures, Sulam Djinn, Serpentine Kavu, and Kavu Climber, in fact the usual sort of Green cards, whereas White is undoubtedly his weakest color, with no card worth playing it for.

Of course, Ryan's initial build is of a Black/Red/Blue deck. It has plenty of good spells, but the creatures are rather lacking, with in particular little that costs one or two mana to cast. His tricks, on the other hand, are amazing, and it would be difficult to imagine him not playing some combination of these colors.

Nevertheless he next builds a Black/Red/Green deck, to take advantage of the superior creature base. The creatures are better, but the deck seems to be lacking something without Wash Out, and Probe.

After laying out all his creatures by casting cost, it becomes apparent that he will probably need to play Green to have any decent early-drop creatures. The natural progression from this is to build a four-color deck, playing everything except White. His colors are fairly evenly distributed in this deck, and his only mana fixers are Fertile Ground, Primal Growth and Quirion Sentinel.

Despite these problems he briefly considers a five-color deck, but quickly decides that the addition of an Armadillo Cloak wouldn't be worth making his mana base worse than it already is. The position he is in should be familiar to all players who have done a few Invasion Sealed Decks - that his best creatures and his best tricks are at opposite ends of the color spectrum.

By cutting Exclude and Repulse - leaving himself with only the late game blue cards of Probe, Wash Out, and Allied Strategies, Ryan came up with the following four-color deck:

After handing this deck-list in, Ryan said that he wasn't very happy with his deck and wasn't confident of making the second day. This pessimistic attitude was based on the fact that while testing the deck against Olivier Ruel, Ryan managed to win only two games out of the ten they played.